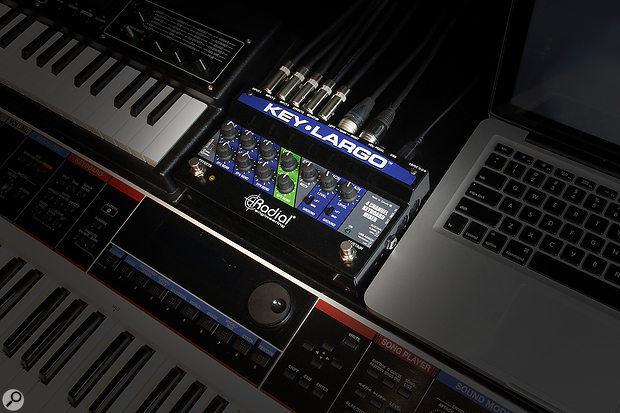 Radial’s innovative Key Largo is designed to sit at the heart of your live keyboard rig.

As I’ve said several times, Peter Janis’ Radial Engineering company have the uncanny ability to come up with innovative product approaches to meet studio and stage needs that you didn’t realise existed. The latest in this long line is the new Key Largo stereo keyboard mixer, performance pedal and audio interface. Conceived as the centrepiece of a multi-keyboard-plus-computer setup for stage and studio, the Key Largo offers a combination of features and facilities that appear to be unique in the marketplace.

Housed in a 14-gauge steel casing, the Key Largo is a chunky pedal with a sense of confidence-inspiring solidity. The front panel carries steel-shafted rotary level and effects send potentiometers for its three analogue and one digital (USB) stereo input channels, and effects return master. The monitor and main stereo outputs have their own individual control knobs and ground-lift slide switches. As you’d expect for a ‘performance pedal’, the Key Largo features footswitches: a latching effects mute (with indicator LED) and a momentary sustain, switchable to either closed or open operation via a recessed, side-panel push-switch. The sustain switch can be connected to your keyboard’s sustain-pedal input via a jack-to-jack cable from a side-panel quarter-inch TS jack socket.

The Key Largo’s rear panel carries a USB 2 socket, three pairs of unbalanced TS jacks for the stereo analogue inputs, two TRS jacks for the unbalanced stereo/mono (switchable via another recessed, side-panel push-switch) effects loop send and return, two balanced TRS jacks for the monitor output, and the XLR connectors for the transformer-isolated, balanced main output. MIDI I/O DIN connectors are positioned next to the sustain pedal’s jack output. A second pair of TRS jacks, positioned next to the USB socket, allow the connection of an external stereo volume pedal — and potentially another stereo effects unit or dynamics processor.

Power to the Key Largo comes courtesy of a 260mA, 15V DC external adaptor, and an onboard switch-mode power supply raises the rail voltage to 24V DC to increase the headroom of the internal audio circuitry. Although the external supply connector itself is non-locking, a clamp is provided to secure the incoming cable.

Down In The Deep

There’s not too much information in the Key Largo’s manual about what actually lurks under its steel surface, but its quoted 20Hz-20kHz (±0.5dB) frequency response, -91dB noise floor and 0.005 percent THD at 1kHz all attest to the quality of the Key Largo’s Class-A audio circuitry. On the digital front, the onboard 24-bit/192kHz-capable USB two-in/two-out audio interface is plug and play on a Mac and requires drivers (supplied alongside the user guide on a USB stick) for Windows operation (Vista and above).

The audio interface has two operating modes — Live and Recording — that are selected via the USB Assign recessed switch on the right-hand side of the Key Largo. In Live mode, the USB audio return from the computer is sent to the Key Largo mixer’s USB input channel. From there — after any effects processing — it is routed, along with the other analogue inputs, to the monitor and main outputs via any connected external volume pedal. In this mode, the USB send to the computer carries the same mix as the main and monitor outputs.

In Recording mode, the USB audio return is routed directly to the monitor and main outputs and bypasses the USB input, its effects send and any external volume control. The USB send carries the signal from the three analogue inputs (plus any effects) and is taken post any external volume pedal.

Both Mac plug-and-play recognition and Windows driver installation went smoothly, with the unit appearing as an available audio interface on both platforms. Playback of a stereo mix from my DAW, both through my studio monitors and through the two JBL Eon G2s that I use as keyboard monitors, exhibited the superb quality that I’ve come to expect from Radial products.

In my studio, I run the stereo outputs from a Yamaha P80 piano and a Hammond XB-2 into active stereo splitters feeding both my main mixer and the Eon G2s via isolating transformers to avoid ground loops — a somewhat complicated setup that works well for me. The Key Largo could replace all that with a one-box solution that would definitely give me a simpler and more convenient setup. However, without retaining the splits to my main mixer I would lose the ability to adjust relative levels between the two keyboards when mixing down a track where both keyboards had been played simultaneously. On the other hand, for live use, where I currently use custom Orchid active stereo DIs with summed mono monitor outputs to send the keyboards to FOH and to stage monitors, the Key Largo would be a useful and practical replacement for my current setup. Although some players will miss them, the absence of tone controls on the Key Largo isn’t an issue for me as I don’t EQ electronic keyboards on stage when playing live, leaving that task up to the FOH engineer.

For me, the Key Largo really comes into its own when a computer connected via USB together with MIDI-capable hardware and software are connected to it. I’ve already mentioned the unit’s role as an audio interface, so we’ll take the record/playback side of that functionality as read, pausing only to note that the Key Largo therefore allows you to play backing tracks from your computer via USB — perhaps a live mixdown of a DAW-based multitrack recording, virtual instrument playback, live looping and so on, thus allowing you to get really creative if you like to work in this way.

Once you’re on stage (or in the studio) with a MIDI keyboard or controller connected to your computer via the Key Largo’s MIDI in and other MIDI-driven hardware connected to its MIDI out, the fun really can begin. With this kind of setup you can play virtual instruments live from your controller and/or keyboard using MIDI travelling via USB to your computer and the audio output from these — processed as you want in your computer — going back to the Key Largo’s USB input. You could also clock a live drum machine via MIDI from your computer and feed its output in stereo into one of the three analogue audio inputs and balance the levels. You might also have a modular synthesizer system, also being being clocked by MIDI, feeding another analogue input in parallel, plus (possibly) the output from a hardware synth connected to the one remaining pair of input jacks. The possibilities on offer could make for some quite complex keyboard/synth/controller/computer setups, but mixing the results down, either to play live or to record, remains simple thanks to the Key Largo’s restricted, but extremely practical, input/output features and layout.

Although intended primarily as a keyboard mixer/performance pedal, the Key Largo also has a lot to offer guitarists, especially those who play live with preamplifiers, amp and pedal modellers, load boxes, loopers, computer-based virtual amps and such. I’ve recently been expanding my own horizons in this particular area of endeavour so, since I’m already synchronising a looper and a drum machine via MIDI, alongside playing through an analogue preamp connected to an audio interface that allows me to access various bits of amp/cab modelling software on my laptop, the Key Largo certainly provides a useful method of compacting my studio setup for stage use.

Although there is much about the Key Largo that will have keyboard players and technology-prone guitarists reaching for their respective wallets, I have my questions about the inclusion of footswitches. Although most guitarists play with a number of effects pedals at their feet, keyboard players tend to make their music with little more than volume and sustain pedals lurking on the floor beneath them. On top of this, keyboards, synths and controllers tend to have a complex array of knobs, switches and screens, all of which demand regular attention during a performance. As a result, keyboardists tend to be focussed on the surfaces in front of them, which I think is where the Key Largo is most likely to find itself sitting.

I’d also have liked there to have been a way of bringing the integral effects on/off and sustain switches out to external footswitches, so that keyboard players could position the Key Largo in the same plane as their keyboards and retain its footswitchable functions, and guitarists could standmount it. However, I think that this is a nice-to-have, rather than a deal-breaker, as those two functions could also be mapped fairly easily to a MIDI foot controller if required.

Radial Engineering’s Key Largo keyboard mixer and performance pedal delivers a high-quality, well-featured and compact way of bringing together up to three keyboards/drum machines/synths (modular or otherwise), an effects chain, MIDI-equipped controllers and a DAW, to form an integrated, interconnected system for both live and studio use. In addition, its abilities and facilities also equip it to perform the same function for the guitarist using amp and pedal modellers, loopers, computer-based backing tracks and the like.

If you’re a keyboardist, a modular synthesist or a guitarist using a computer as part of your setup for stage or studio then the Radial Key Largo may well be your key to a compact, efficient, high-quality system that will be quick to set up and to break down. I can’t think of an easier and more cost-effective way of integrating a computer, MIDI and musical hardware and software on stage or in the studio. If you’re already on (or intending to head down) this route then you really should take a close look at Radial’s Key Largo. I’m not entirely certain that this one is going to be going back.

I can’t think of another one-box solution that can duplicate what the Key Largo can do. I can, however, think of ways to get similar, but not necessarily identical results from a combination of computer and hardware by using either a MIDI-to-USB interface and a small mixer with an audio interface, or by deploying an audio interface equipped with at least eight analogue inputs and outputs, plus both MIDI and USB connectivity.

A high-quality, well-featured and compact way of bringing together a computer DAW, MIDI and musical hardware for both live and studio use.