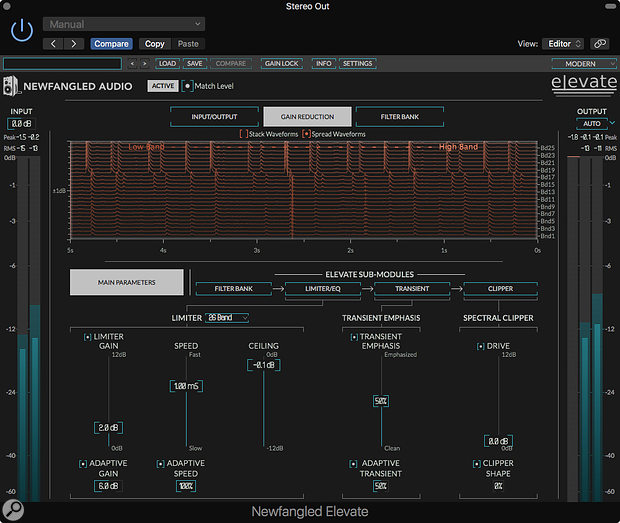 A new processor from a new developer promises limiting and transient control precisely targeted to the needs of an individual mix.

Just when you thought that a truce was being drawn in the loudness wars, along comes another plug-in designed to make your mixes sound even louder. However, Newfangled Audio’s Elevate should not be dismissed as just another ’squash it into the red’ processor: it is a genuinely useful and surprisingly versatile mastering tool that can be used to control tonal character as well as loudness. If you are wondering why Eventide are selling plug-ins by Newfangled Audio, the answer is that Newfangled Audio’s founder, Dan Gillespie, was Eventide’s former DSP engineer, and indeed he still consults for the company. His first two plug-ins, both aimed at mastering, are Elevate and EQuivocate, the second of which is being offered free for a limited period.

Available in all the usual plug-in formats and authorised using an iLok account, Elevate combines a multiband EQ and multiband mastering limiter with multiband transient enhancement and a final clipping stage, which is intended to allow loudness to be increased while minimising unwanted artifacts such as pumping, fatiguing distortion or lack of perceived dynamics. At its heart is an ‘auditory’ filter bank that separates the audio spectrum into frequency bands on the so-called MEL scale, which the human ear interprets as being equally spaced — though the frequencies can be changed by the user if required, which might help if there are specific frequency bands in the audio material that need attention. To keep the process sounding natural, much of the work is overseen by adaptive algorithms that exercise control over how adjacent frequency bands behave, though the user can control the degree of adaptive control applied for each section, in essence going from single-band-style control to full multiband. The detailed Sub Module views of the limiting and enhancement sections each have their own Adaptive controls, whereas in the simplified main view the Adaptive values are set in small numerical boxes at the bottom of the screen; a small box to the left of each functions as an on/off switch.

The maximum number of filter bands is 26, the same as in the currently free EQuivocate plug-in, but good results can often be achieved by setting a smaller number of bands, which in turn reduces the CPU overhead. The level of each band can also be adjusted after the manner of a graphic equaliser in the Limiter/EQ page, where it’s also possible to draw in a curve as an alternative to adjusting individual faders. Individual bands or groups of bands can be soloed to aid setting up.

Any processing of this type is likely to run foul of the illusion that what sounds louder necessarily sounds better, so a Gain Lock button has been added to tie down all the gain-related parameters as you change presets. There’s also a Match Level option that boosts the dry signal when the plug-in is inactive so that you can compare it with the processed version at the same level — though you have to watch out in case you run into clipping — and an Auto Output function that attenuates the master output by an amount equalling the total amount of gain and drive added applied. 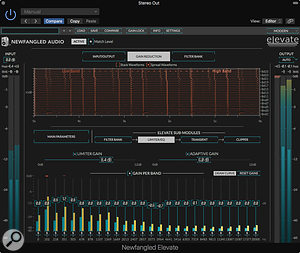 The Limiter/EQ Sub Module allows dynamic parameters and gain to be set individually for each Elevate frequency band.If you work only from the main page parameter, Elevate is easy to use but still capable of results that single-band devices can’t match. Here you’ll find just 10 core parameters providing control over the adaptive limiter, transient engine and final clipping stage. Going deeper, you can use the Elevate Sub Module tabs to access more detailed parameters in the four sub-modules: Filter Bank, Limiter/EQ, Transient and Clipper. If you need to change the position of the bands, the Filter Bank Sub Module offers an easy ‘drag it’ solution.

Adaptive Gain and Adaptive Speed, which are accessed by the aforementioned boxes below the Limiter Gain and Speed faders on the main page, control the adaptive algorithms that work across the frequency bands to reduce the audible artifacts that might occur if each band were allowed to operate completely independently. Adaptive Gain, when active, ensures that while more gain reduction is applied to bands that are close to their level limit; you can also dial in the maximum difference in gain reduction that can be applied relative to the other bands. Adaptive Speed adjusts the limiter time constants according to the band, this time with a percentage control. With these adaptive functions bypassed, all bands get the same treatment. 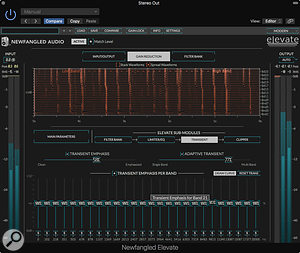 Transient ‘emphasis’ can likewise be adjusted on a per-band basis.Limiters, by their very nature, attenuate short transients, which can sometimes have a detrimental effect on the musical dynamics. Elevate provides the means to preserve transients by allowing fast transients to pass through the limiter unchanged, or even to emphasise them for a more exaggerated dynamic. On the main page you can set an Adaptive Transient value to moderate the multiband operation and there’s a global Transient Emphasis slider to control the overall amount of enhancement; moving to the Transient Emphasis view presents a slider for each EQ band fader, allowing independent adjustment of the degree of transient enhancement applied to each frequency band.

Of course, if you are going to start allowing peaks to sneak by the limiter, you’re going to have to do something about them — which is where a clipper can help. Elevate’s spectral clipper comes at the end of the chain, and allows up to 12dB of drive to be added using a single fader, while a Shape slider morphs between soft-knee saturation and hard-knee clipping. A display on the Clipper Sub Module page shows the shape of the knee with the signal superimposed upon it. Moderate clipping is often used by mastering engineers to maximise loudness; although, unlike the other modules, it’s not a multiband process, the variable knee makes Elevate’s interpretation quite versatile. Clipping the peaks of brief transients can help increase level without causing gain pumping, or you can add deliberate aggression to a mix by cranking up the Drive control and tweaking the knee shape if that’s what you want. 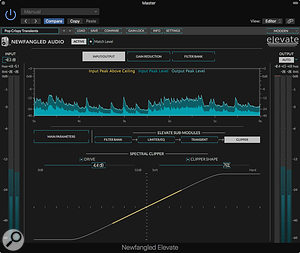 Clipping can be a useful alternative to hard limiting at the output stage.In all modes, meters show the degree of processing being applied to each band, and a scrolling Input/Output meter shows the peak input value overlaid with the output peak value over time. Two view options are available: in the Stack Waveforms view the individual gain meters are shown stacked on top of each other rather than one above the other. A Filter Band meter view provides a bar graph showing the input level, output level and gain reduction for each individual frequency band. Input, output and gain reduction meters are visible at all times, but there is no loudness meter calibrated in LUFS, which I would have found very useful. On querying this I was told it had been requested by other users too and so is likely to be added in a future update.

For most routine work that doesn’t require an EQ adjustment, the main page parameters do a perfectly good job, and a significant increase in loudness can be achieved with little subjective change to the tonality or apparent dynamics of the music. Delving into the individual pages allows a finer degree of control, which is especially useful in the transient enhancement section, as you can apply as little or as much enhancement to specific frequency bands as you deem fit. Elevate is also useful outside of a mastering context: the tools it provides could come in very handy for processing, for example, a drum mix bus to help bring out certain aspects of the sound. Those adaptive controls really help in keeping the processing ‘sensible’, but it’s nice to know you can break the rules — or at least bend them — if you want to.

In its mastering role, the range of tonal possibilities is revealed by the guest engineer presets provided to get you started. It is worth looking at how some of these are set up, as they provide a good guide as to how best to use Elevate. Here you’ll find ways to make mixes sound smooth and silky or, at the other extreme, quite aggressive. Detail can be lifted out or suppressed in specific parts of the audio spectrum, and loudness can be increased by a significant amount without killing the sound. However, do bear in mind that loudness normalisation is increasingly being employed in audio delivery, meaning that if you go too far with your processing, your mix will simply get turned down by the automated processes in the radio, TV or streaming service’s playback chain — so use this power with care and always check your end result using a loudness meter.

There are many very good-sounding mastering plug-in limiters from the likes of iZotope, Waves, UA, PSP, FabFilter, DMG Audio and others, but this is the first one I’ve tried that offers such flexible multiband control.

Elevate is a seriously useful tool with a multiband capability that not only makes it able to focus on the parts of the spectrum that need attention but do so with minimal artifacts.