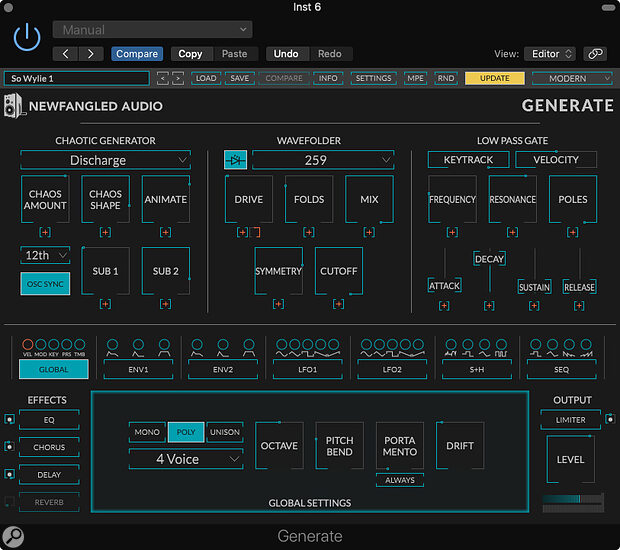 Hot on the heels of the free Pendulate mono synth, also distributed via Eventide, Generate can either be used in mono, four‑voice, eight‑voice or layered voice unison mode. Eight voices may not sound over‑generous, but trust me, you probably won’t want to play big chords on this thing — in many cases, two notes at a time is one note too many. Pendulate is definitely worth investigating if you don’t have it already and is a good way to explore the basics of Generate, but Generate takes the concept much further, not just by adding polyphony but also by providing significantly more features. It also supports MPE, for those with a keyboard controller that sends it. Authorisation is via an iLok account, either using a physical iLok or computer authorisation. There are plenty of presets to get you started while you’re becoming familiar with the controls, and there’s also a Random button that produces usable results more often than you might imagine.

As with Pendulate the sound generator is described as a chaotic oscillator that feeds into a wavefolder to modify the harmonic structure, and then something akin to a filter section that is actually a low‑pass gate based on a concept devised by Don Buchla, a legendary name in synth design.

The instrument also includes envelope shapers, effects and assignable modulators, but the real key to the sound is the way the oscillator, wavefolder and filter section work together. It is explained that one of the oscillator modes is based on the principles of two pendulums that interact, sometimes in a complimentary sine‑wave kind of way but other times in a more chaotic manner producing complex modulations and harmonic changes. This is the only oscillator type in the free Pendulate version while Generate has five different types on offer.

Generate’s interface is unusual, with square controls that have a blue line around them tracing the amount and, when adjusted, the value shows inside for as long as you tweak the control, then it reverts to the control name. As you play notes, the three main sections of the GUI display animated shapes that sit behind the controls. These ghostly yellow shapes relate to the dynamic goings‑on in the oscillator, wavefolder and filter sections and are surprisingly informative. Two other skins are available though the default one looks the best to me. 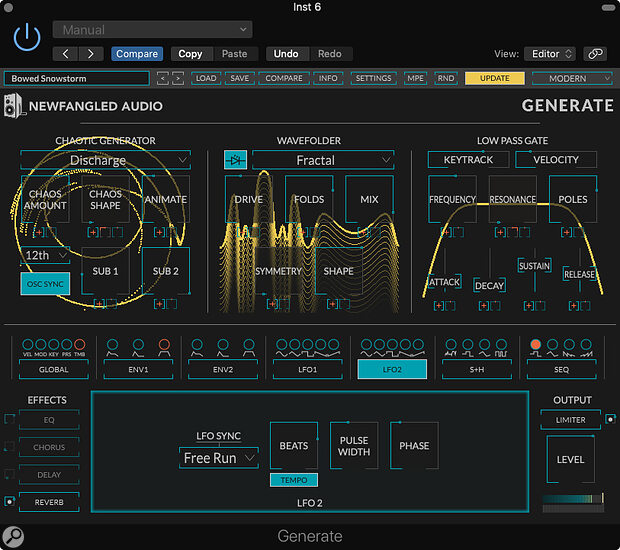 Apparently the mysterious chaotic generator is based around a chaotic, non‑linear system which interacts with the keyed oscillator. Depending on the nature of the non‑linear system, different results are produced, which is why there are five different modes. Pendulum is based on a modified version of the equations describing a double pendulum system and is useful for creating organ and bass‑type sounds. Vortex has a nonlinearity, described as pulling the signal path towards the centre resulting in hard transitions and a strong harmonic content, well‑suited to cutting lead line tones. Pulsar is described as being similar to Pendulum, but less stable, adding a vintage character to pad sounds, while Discharge can produce either a soft or grainy quality, again useful for vintage sounds. Turbine is designed to be more unpredictable for creating more ‘out there’ sounds.

As the name suggests, Wavefolder folds the wave back on itself creating harmonics, essentially a type of additive synthesis again originated by Buchla. There are three wavefolder types designated 259, Animated and Fractal. 259 is a model of the original Buchla 259 wavefolder while Animated is based on a warped sine wave. Fractal is based on fractal geometry and can create a lot of harmonics very quickly.

At its most polite, Generate can produce some fabulously solid, Moog Taurus‑type bass sounds with faux pulse‑width modulation galore...

A variable input drive combined with the various other controls adjust the shape of the wavefolding while modulating the wavefolder adds a richness to the sound rather like the evil twin of pulse‑width modulation in an analogue synth. A further variation is available via the diode symbol in the top‑left corner of the Wavefolder section that switches between two VCA emulations, an analogue Vactrol VCA or a digital VCA. There’s a definite change in timbre between the two settings. The best advice I can give for this section is just to twiddle things and see what happens. If the sonic output seems too radical, then there’s a Mix control to blend between the Wavefolder output and the Chaotic Generator output.

The Low Pass Gate (LPG) combines the functions of a resonant low‑pass filter and a VCA, again based on a design by Don Buchla. Key Track enables the cutoff frequency of the LPG to follow the note you’re playing and as with a conventional filter there are controls for cutoff frequency and resonance. The Poles knob moves between a VCA‑style Low‑pass gate (single‑pole low‑pass filter) and a resonant three‑pole low‑pass filter. Its ADSR envelope shaper works conventionally but apparently operates on the input to the LPG section rather than its output.

Moving down the page, the Global tab gives access to the Mono, Unison and Poly voice modes as well as MIDI setup functions, Pitch‑bend range, Portamento and Legato mode. An Octave knob selects the register for the entire synth over a +/‑ two‑octave range. There’s also a Drift control that emulates the slight oscillator instability of analogue synths and a detune option for use in Unison mode. A Stereo Width control adjusts the stereo image at the output of the LPG, and in Mono mode it uses the X and Y axis of the Generator output to create wide lead sounds. In the other modes it pans the various voices across the stereo soundstage.

Modulation sources can be patched to multiple destinations and are shown by red patch cables, which can be displayed only when routing or switched on all the time. When a mod source is selected, a small square knob appears below each potential target control and as with the larger square ‘knobs’, this is used for adjusting the amount of modulation once a patch has been made.

There are two envelope generators triggered by note‑on events and each can generate three modulation types, AD, ASR and ADSR at the same time, each of which can be routed to any destination. Similarly there are two LFOs, each producing sine, triangle, pulse, sawtooth and ramp outputs that can be used simultaneously and routed as desired. Any source can feed multiple destinations. The LFOs can be locked to tempo if required and there’s an LFO sync option that determines whether the LFO will start a new cycle at each key press or not. A Pulse Width knob adjusts the pulse width of both the triangle and pulse waves.

A separate Sample and Hold generator provides the familiar random steps beloved of analogue synth users everywhere, and again this can be adjusted for speed and tempo sync’ed. Four outputs are available sending White Noise, a stepped, sampled version of the Noise, Sample and Glide, and a random one or zero glitch signal based on the rate set by the Frequency or Beats control. There’s also an eight‑step Sequencer, again with both rate and tempo‑sync options as well as a choice of outputs and trigger modes, with both smoothed and stepped waveforms. 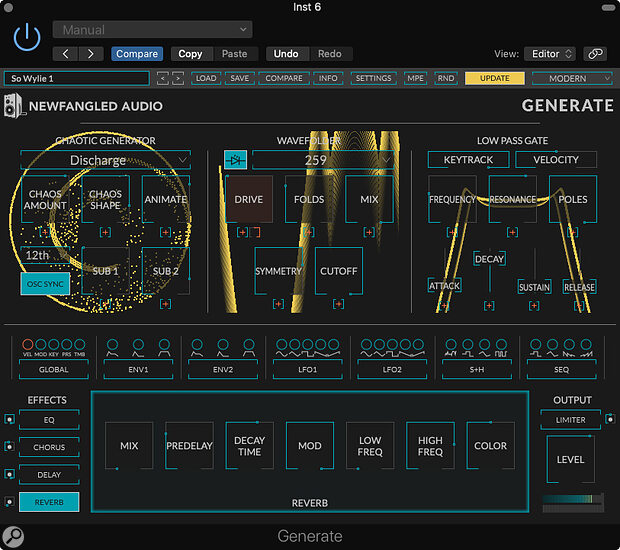 If the signal hasn’t been sufficiently mangled by now, there’s also an output effects section where the small knob to the left of each FX button adjusts the amount of effect being applied. Press the button to bring up the edit controls for the effect. The effects are listed as EQ, Chorus, Delay and Reverb. EQ has variable Gain, Frequency, Q and Type and can be adjusted by dragging nodes much like any other plug‑in parametric equaliser. The Amount control to the left of the button scales the overall EQ to add more or less without changing the curve shape. Chorus is fairly conventional, though it also has a feedback control to create a more obviously filtered sound and there’s also control over the stereo width of the effect, plus the facility to apply high‑pass filtering. Delay is pretty conventional too and can produce effects that range from a short slapback to repeating echoes. It has a ducking control and also works as a free‑running looper. A limiter in the feedback path saturates at higher levels. The reverb controls also look familiar, the process being based on a single algorithm with the usual controls to affect timbre, decay time and pre‑delay.

When the signal reaches the output section, it can be controlled in level but there’s also a limiter that can be moved from its default location after the EQ stage to the end of the effects chain, post‑gain. A meter shows the input level to the limiter section and there’s a peak hold meter that shows if the limiter has been provoked into action.

Words such as fat, gritty, gnarly and angry only hint at its capabilities.

The sound of this synth is not easy to describe, but you might like to think of it as the dark side of analogue. At its most polite, Generate can produce some fabulously solid, Moog Taurus‑type bass sounds with faux pulse‑width modulation galore and you can even coax the odd smooth analogue‑style pad out of it, but smooth and polite is not really what this synth is about. Words such as fat, gritty, gnarly and angry only hint at its capabilities, and as the chaos element in its design suggests, the sounds are very dynamic in that they can continually change and evolve.

Some of the sounds hint at FM, others at bit‑crushing gone bad, but unless you dial out nearly all of the chaos, the sounds also have an evolving character that is sometimes hard to pin down as what starts out sounding smooth and almost predictable can suddenly flare up into a tirade of harmonic aggression like the trombone player from hell. This isn’t a synth you’d use to emulate traditional instruments, though it can be dialled back to hint at organs, smoother pads and even twisted choral voices, but it certainly fills a gap in the sonic spectrum that other synths might find difficult to reach.

Generate is a synth with a lot of character and makes good use of its Don Buchla influences. It is a good fit for bass sounds, sci‑fi movie beds, searing leads and textural mayhem, but can also be coaxed into more polite analogue‑like territory by dialling back the chaos.