Qu-Bit’s Wave is presumably named after the Wave (wav) format samples it plays — up to four of them at once. A 4GB MicroSD card is included, ready-populated with drum hits, vocals, synths and sound effects, easily enough to get you going. There are no restrictions on the length of samples, only the number: the Wave can address no more than 64 mono samples. 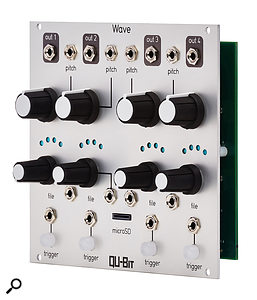 This is a module of Zen-like simplicity and its four channels must be treated completely separately, from their pitch inputs to their respective audio jacks. There isn’t even a mix output. And although described as a polyphonic sample player, the Wave lacks any built-in voice assignment. You can’t, for example, play its channels sequentially from a single set of CV/Gate connections. Instead, operation is pared down to the essentials of sample triggering and transposition. Spin a pitch knob and the channel’s sample is transposed by as much as two octaves upwards, or down as deep as four. At the knob’s centre position, which is easily located with a notch, playback is without transposition. By connecting a keyboard or sequencer, you can talk to each channel chromatically via the V/oct CV input (range: 0-5 V).

Whether initiated from an incoming gate or manually via its white trigger button, every sample is a one-shot that plays until the end. If triggered a second time before completion, it is restarted. It really doesn’t get much simpler than that!

After a brief peruse of the supplied recordings, I popped the card out in order to replace them with my own stuff. A card reader is necessary for this, of course, but at least the required format is straightforward: 16-bit mono, 44.1kHz with no metadata included. Qu-Bit supply a Mac utility to perform the conversion for you and there are options such as Audacity for PC users. The manual lays out the file-naming conventions and once these were assimilated, I set about filling the (mostly-empty) card, beginning with a couple of hour-long recordings, followed by the usual percussion, synth basses and snippets of movie dialogue. Then, out of curiosity, I split a couple of finished tunes into their left and right components and copied them along with the rest. Triggering this divided audio (panned appropriately) was hugely rewarding and suggested that the Wave could be a convenient source of long ambient effects — or even complete backing tracks! Prospective mimers must be careful to hit those triggers simultaneously — and only once — or the game is up!

The File knob or its CV input determines which of the channel’s four samples can be triggered. If you think four isn’t very many choices, I’m inclined to agree. Even when you’ve fully populated the card, you still only have access to 16 samples at a time, because that’s the capacity of a bank. Switching banks involves holding down a couple of buttons, waiting five seconds then picking one of the four available. And you can only load complete banks, which means you must always replace the contents of every channel. Ultimately, it’s a process that feels rather clunky, mostly because it forces you to decide about sample grouping when copying to card, rather than at the moment you want to use them.

I’m in two minds about this module. I can’t deny the appeal of triggering up to four high-quality samples, playing them chromatically and switching between them using CV. I’m seriously drawn to the idea of loading up my meatiest hits, archive nature recordings and specially prepared material to feed into my modular effects and audio processors. However, at the price the shortcomings are hard to dismiss. It seems a shame that sample switching is limited to just four per channel. Having a total of 64 samples on card isn’t bad, but these would have stretched so much further with user control over the start time.