You might expect a specialist audio PC to come with an intimidating price tag, but, as the Rain Recording Solstice range proves, that needn't be the case... 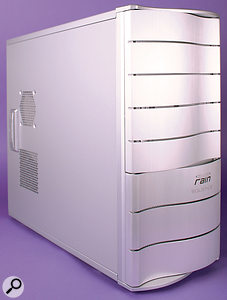 Rain Recording are unusual among specialist audio PC builders in operating on both sides of the Atlantic, so whether you buy their machines in the UK, in Europe or in the US, you benefit from local support. Along with their more expensive Intel‑based Core i7 and Core 2 Quad models, they also offer the Solstice range, which is based around an AMD Phenom II X4 Quad Core processor and is suitable for those with less demanding requirements and shallower pockets.

While the fastest Phenom II is still slower than the slowest Core i7, there are two things AMD do really well compared with Intel. The first is (as our US cousins would say) bang for the buck, meaning that the financially challenged can still get a lot of processing performance for a significantly lower price. If you need to run several hundred plug‑ins or soft synth voices, you'll have to budget for a Core i7, but if your needs are more modest, a Phenom II‑based PC will do the job for far less money.

The second is future‑proofing. Unlike Intel, where each new processor range invariably requires a new motherboard and associated chip set, AMD have managed for years to make their new processors compatible with existing motherboards, which, in turn, means that if you buy an AMD PC you're far more likely to be able to upgrade it later on with the latest AMD processors if you need more grunt. With this in mind, let's see just how much processing power a Solstice can offer the musician.

The Solstice gives a great first impression, courtesy of its stylish aluminium case with its S‑bend door, back‑lit with blue LEDs, and powered by a quiet Hiper 425‑watt PSU. At the heart of the Solstice is a Gigabyte GA‑MA78GM‑S2H motherboard (the name just slips off the tongue, doesn't it?), and although its smaller-than-usual microATX format normally means fewer expansion slots, it still manages to cram in a PCIe x16, a PCIe x1, and two PCI slots.

In the review system, one PCI slot was occupied by a three‑port Firewire expander card, but the other three slots remain for further expansion because no graphics card is required: this motherboard features integrated ATI Radeon HD 3200 graphics, complete with VGA and DVI‑D outputs, (although you can upgrade this with various ATI cards if you need faster graphics for non‑audio purposes). Only 2GB of RAM was fitted in the review machine, of which 256MB is required for the integrated graphics, but unless you want to load in lots of samples and loops this may well still be adequate for you (I only have 2GB installed in my own PC).

The motherboard is compatible with earlier Athlon 64 processors, as well as the Phenom II range, but in this system was fitted with the Phenom II X4 810 Quad Core processor, clocking at 2.6GHz. Completing the review model was a single, 320GB, 7200rpm hard drive and a dual‑layer DVD/RW drive. Plenty of more ambitious options are available, including processors up to a Phenom II X4 955 clocking at 3.2GHz, up to 8GB of RAM, several terabytes of drive capacity, and extra noise‑reduction options, monitor screens and optical drives with Blu‑Ray capability.

Larger cooling fans turning more slowly are always likely to be quieter, so I was pleased to see 120mm models fitted at front and rear of the case and in the power supply, and a 92mm model on the CPU cooler. Overall, the internal wiring was reasonably tidy, and there was plenty of space to fit several more drives internally. There were also plenty of ports available to plug in external devices, with a total of three Firewire ports and up to 10 USB ports. I was also taken with the Hiper Alloy keyboard accompanying this system, since its aluminium livery tied in beautifully with the aluminium case of the PC. 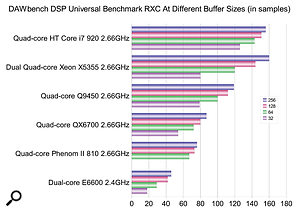 The Phenom II X4 lags behind Intel quad‑core models of the same clock speed when running a test based on Reaper Reaxcomp (RXC) plug-ins, but still offers good performance and lots of upgrade potential.

The first time you switch on any PC is a nervous one for the musician, but I'm pleased to report that the review model Solstice was significantly quieter than many mainstream PCs, and perfectly adequate for those working with electronic sources and with mics more than a few metres away. The system idled at a very cool 27 degrees Celsius, and only rose to a low 48 degrees Celsius while I was torture testing, so Rain could possibly reduce fan speeds, and therefore acoustic noise, still further. Acoustic case lining and hard drive cradles are optional extras for those who need even lower noise levels, and given the modest price increase I'd recommend them to anyone who wants to record with a nearby mic.

Windows performance had been increased to the limit by reverting to the Classic theme (which always releases a little more processing power), and the single drive had been split into two partitions: 60GB for Windows and its applications, and 240GB for audio purposes. Given the speed of the drive (it managed an excellent maximum sustained transfer rate of 120MB/sec), and the fact that audio applications rarely access the Windows drive when recording and playing back audio, a single drive isn't quite the compromise that it used to be, although you'd be very wise to back up your data to some form of external media for greater security.

While Intel may be ahead in the performance stakes with their various quad‑core processor ranges, AMD's Phenom II nevertheless turned in a good performance for the price. Sisoftware's Sandra measured a large 9.5GB/second Memory Bandwidth (nearly double that of my Intel dual‑core E6600 PC!), CPU Arithmetic of 35 GIPS (Dhrystone) and 34 GFLOPS (Whetstone), and CPU Multimedia of 102 MPixels/s (Integer) and 45 MPixels/s (Float).

However, the most important test for any audio PC is to run audio tracks and plug‑ins, so I once again turned to the DAWbench Universal DSP benchmark, since I already had DAWbench results for a selection of other processor ranges running at 2.66GHz. I managed 76 Reaper Reaxcomp plug‑ins at a buffer size of 128 samples (3ms latency at 44.1kHz), and 67 at 64 samples, which puts the Phenom II X4 810 fairly close behind the Core 2 Extreme QX6700 quad‑core, and way ahead of my own 2.4GHz dual‑core E6600. Good going for a budget PC!

If I were buying from Rain Recording UK, I'd pay the extra £25 and upgrade the Solstice CPU to the 940 3.0GHz model for an extra 15 percent processing power, which would give the system equal performance to the QX6700 shown on my graph. In the US, I'd stick with the default 2.8GHz model, since the $100 increase for the next model only buys you seven percent extra performance. 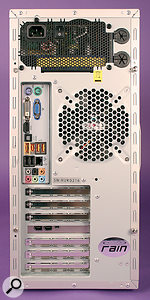 The review model has a Firewire card occupying one of its PCI slots, but the motherboard's built‑in graphics mean that the remaining three are all available for expansion.

Overall, I find it very encouraging that so many DAW builders are offering budget options for the musician. Specialist audio PCs like this one feature components that have been specially chosen for wide compatibility with audio hardware and for their low acoustic noise levels, which are then combined to create a system that suffers no obvious bottlenecks in audio performance.

You'll always be able to find mainstream PCs with a similar spec for less money, but given the number of expensive mistakes being made by musicians, a machine like this one buys you peace of mind and guaranteed performance, rather than a lifetime of audio clicks and pops and incompatibility problems. To sum up, if you don't want rain on your parade, why not warm to the Solstice!

By default, you get a one‑year warranty and support by phone, email and Internet, but this can be extended to three years with the RainCare Plus plan for an additional £171$249. There's a dedicated RainCare Help Desk for email queries, staffed by trained technicians who aim to reply to your queries within 24 hours, and you can also use the Help Desk to book a RainCare Remote appointment, so a technician can remotely connect to your computer to help diagnose any problems. Acronis True Image software and a backup of your system as shipped is also included in the package.

Unusually, you can feel safe about connecting to the Internet on Rain workstations, since they use Microsoft's Virtual PC software to create the 'RainZone' — a virtual desktop environment incorporating web browser, email, chat and anti‑virus protection. This is a clever touch, since as soon as you close down your Internet session, that instance of the computer disappears, along with any virus or other malware nasties, leaving your audio PC unaffected. However, it incorporates a shared folder so that you can download updates and the like, and then transfer them to your audio desktop when they've been virus‑checked.

Rain Recording's Solstice proves that you don't have to find a pot of gold to afford a specialist audio PC offering good performance and low acoustic noise.

Rain's Solstice range offers different default options in the US, but prices start at $1199.