Following on from Softube's Vintage Amp Room plug‑in comes Bass Amp Room, which is similarly protected by iLok and available in VST, AU and RTAS plug‑in formats, for both Windows and Mac platforms. While some modelling plug‑ins try to seduce you with endless variety, Bass Amp Room follows the tried‑and‑tested Vintage Amp Room approach of offering a small number of components that are modelled with a high degree of accuracy. In other words, they focus on the quality of the amp and cabinet modelling, and leave you free to modify the resulting sound with your own effects plug‑ins if required. 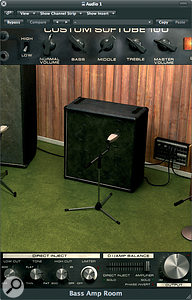 In fact, Bass Amp room provides only one amplifier model, although this can be fed through any one of three speaker cabinets. The mic distance from the cabinet can also be varied, with further adjustment of horizontal positioning available when the mic is close to the speaker. There's also a DI section with basic tone controls, and an amp/DI mixer, an adjustable limiter and a 'phase‑invert' switch. So, despite the very simple interface, the range of potential bass sounds is impressively wide. The designers aren't allowed to name the amp on which they've based their model, but they do tell us that it was originally designed as a guitar amp in the 1970s, and is characterised by thick and solid preamp distortion, when overdriven, that means you can crank it up without losing the low end.

The three cabinets vary in size, with the largest producing a predictably deeper tone than the others, and the smallest being a little lighter on the low end. The cabinets are selected by clicking and dragging in the room view to get the desired cab in the centre of the screen, after which the mic distance and lateral offset can also be adjusted by clicking and dragging. A conventional amp control‑panel sits at the top of the screen, and includes high and low gain settings, an input gain control, three-band EQ and a master volume. By contrast, the DI has high- and low-cut controls, plus a central tone knob, the results of which range from warm and deep to thin and bright. Whereas the amp catches transients by 'saturating', the DI utilises a limiter. A single dial adjusts the limiter sensitivity, and this has a red lamp to show when the limiter has been pushed into operation. The balance of the two sounds is adjusted by means of a horizontal slider, and it's when mixing them that the 'phase‑invert' button can be used to determine which setting sounds best. Being able to blend the two sources is what makes this plug‑in so versatile.

The DI works separately from the amp/cab simulations, and its simple tone controls are specially designed for bass guitar. This means that you could, for example, set up a thinner, heavily distorted sound on the amp and blend this in with some deep bass from the DI to give aggression with punch; or you could use a bright DI sound to add a bit of edge to an otherwise warm amp sound. As a rule, the 'phase‑invert' position that gives the deepest bass is the right one, but if you stumble across something that's technically wrong but sounds right artistically, there's no reason not to use it. It's also possible to bypass the cabinet emulation to allow a speaker model from Vintage Amp Room (if you own it), or of course any other speaker modelling plug-ins you happen to own, to be used instead.

Before getting in too deep, it's worth mentioning that any bass with passive pickups needs to be fed into the system via a high‑gain ('Hi‑Z') DI box, or an audio interface that offers an 'instrument' input setting. When adjusting the amp, increasing the input gain can push it into distortion, particularly if the high‑gain input setting is chosen, but the power‑amp knob can also bring in some nice power‑amp distortion if used carefully. It's possible to push the latter too far, though, at which point the sound can become quite nasty — just as the real thing can. The preamp distortion is nicely controlled, and can go from dead clean, through slightly hairy, all the way to Stranglers‑on‑acid, should you want it!

Of the three cabinet models, the Classic is the largest, and would appear to be based on a popular brand that begins with the letter A... I'll let you guess it! This is an 8 x 10 cabinet that combines good definition with an impressive depth of bass. The Rocker is a model of a typical 4 x 12 cabinet, for a harder, more present sound, while the tiny Odd Bird is actually a 1 x 12 design, chosen simply because the guys at Softube happened to think it sounded nice! All three produce very authentic and usable bass sounds, with very different characters, but the DI blend really adds to the tonal range, and allows even the smallest cab to be given an extra helping of warm bass if it needs it. For a fully produced bass sound, you'll probably need to add your own compressor plug‑in, but that's about all you'll need unless you're after something very unusual. The results are very convincing and amp‑like, and the speaker emulation is very effective in filtering out finger noise.

At $199$249 including VAT, Bass Amp Room isn't the cheapest amp‑modeller around (the offerings from Line 6 and IK Multimedia are probably the best software competitors), but unlike some bass amp plug‑ins, this one lends a real sense of depth and weight to the sound, and is definitely worth looking at if you do much 'real' bass guitar recording.  Paul White

A classy software emulation of a bass amp and three cabinets, with some useful DI functionality thrown in for good measure.