Insight Into The Studio-Building Process By Jon Burton

The beautifully produced story of Recording Architecture demonstrates that the same book can be both a work of art and an invaluable resource for the studio builder. 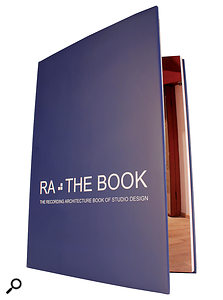 I first met Roger D'Arcy and Hugh Flynn of Recording Architecture five years ago. Like many SOS readers contemplating a studio build, I had read most of the books and visited endless studio design web sites over many years. However, my budget studio idea had grown out of proportion. Instead of building myself a mix room, I had found a business partner and a building, and decided to build four or more studios in the space. The reasoning behind this was that by renting out the other rooms I could subsidise my own room and share costs. I had found people interested in renting by selling them the idea that not only would they be 'proper' but also heated! However, as I got closer to starting the studio build, I began to question how much I actually knew about studio design, and although I had read widely, there still seemed a conflict of ideas as to what constitutes good studio architecture. I decided I needed professional help, so I rang round a few studio designers, and contacted people I knew who had studios and asked their advice. One name that kept coming up was Recording Architecture. 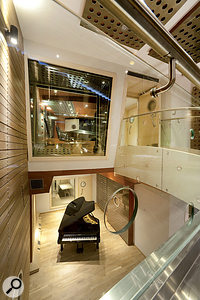 Another dramatic Recording Architecture creation covered in RA: The Book is Babajim Studios in Turkey.As luck would have it, the following month I was in Docklands doing some tour rehearsals. I plucked up the courage to ring RA and made an appointment. This was not free! I was paying for a consultation. But I had spoken on the phone at length with the architect, Roger D'Arcy, and his enthusiasm had convinced me that it would be money well spent. To save cash, he encouraged me to accurately measure my space before I arrived, so he had the dimensions. I arrived suitably nervous in Greenwich on the day, plans in hand.

There then followed what I can only describe as an inspirational two hours. Roger and I talked about what we hoped to achieve and how best to go about it. He then hand-sketched a basic plan, with many quick alterations, in pencil. This was to become the blueprint of the The Laundry Rooms. He managed to squeeze in five studios and a central, shared live room. Halfway through the consultation I had already agreed to him doing the design and drawing for the studios, although we would manage the build. Over the next week Roger finished the design, and Hugh Flynn produced a sheaf of drawings covering every aspect of the build.

Recording Architecture have designed many remarkable studios. One of those documented in RA: The Book is Black Rock in Santorini.

It is the quality of these drawings that you can see in their newly published book, along with great photos of many of the studios Recording Architecture have produced over their almost 25-year history. This book is not a lightweight publication. It measures 10.5 by 15 inches. It has over 140 plans, 330 details, and drawings, and 150 full colour photos over its 350 pages. This is a book that would grace any coffee table with confidence. The quality of the printed page is superb, but no more than you would expect of a book of this nature. It is easy to see why it has a high cover price. But what does it offer the average SOS reader?

Firstly it constitutes a major body of work, covering some of the most famous and prestigious studios in the world. In the foreword, Adrian Kerridge — a former chairman of APRS and owner of Lansdowne and CTS Studios — sums up the book beautifully: "nothing is left out, nothing is held back. It is a record of how acoustically successful studios have been, should be and can actually be built.” This, in a nutshell, is why this book is so important. 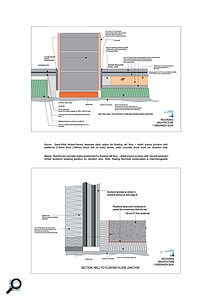 As well as many full-colour photos, the book is also packed with beautifully clear and helpful drawings.The first half of the book deals with projects RA have worked on over the last quarter of a century. This it does with plans, photos and brief narratives, major projects being dealt with in more detail. These cover studios of all shapes and sizes, from private and in-house studios to major commercial facilities, mastering and cutting rooms, post-production and film mix rooms, as well as educational facilities. Of particular interest to me are the many privately owned studios, some in weird and wonderful places! However, this just whets your appetite for the second half of the book, entitled Work Stages, which covers all aspects of studio design and build. Brief descriptions are followed by Hugh Flynn's precise and easy-to-follow drawings. Having worked from drawings just like these, I can attest to their clarity and ease of use. These are well thought-out plans that you can follow yourself or present to any qualified builder to use. I particularly like the instructions of what timber stud work should not look like on page 214! 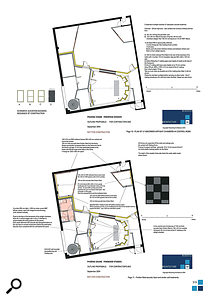 I must stress that this is not a DIY manual, but it does give you a good starting point from which to begin building the studio of your dreams. The studio-building process is broken down into a selection of key stages, such as sound isolation, acoustic treatment and electrical power. Each phase is discussed with real examples and explanations. Drawings set out how work should be done — and also how it should not be done, including many common pitfalls! Accompanying this is a text that combines science and solid reasoning. There is some explanation of why differing techniques are used on different projects, and how fashions change. It is also interesting to see how RA's signature style developed over the years. There's a chapter on Black Box, RA's factory-made acoustic solution, which is a range of self-contained, pre-finished elements available as part of, or as an addition to, an existing project. A budget range, Eggbox, which includes information on how to make an acoustic element from an Ikea book shelf, gets a brief visit.

To finish off, there's a potted acoustics lesson that is easy to read and pertinent, and a breakdown in drawings of Phoenix Sound Studio at Pinewood. Here you can see the construction plans in sections, covering all aspects of the build. This is followed by a useful guide to sourcing specialist materials.

A Dose Of Inspiration

So will this be the ultimate guide to improving your studio? Well, it might inspire you to go and self-build, but is just as likely to make you consider employing an architect for your project. As an insight into the work of RA over the last 23 years, it is a well-polished tribute. As a stand-alone book on studio architecture, it is superb. As a reference book, it's something that no college that teaches architectural acoustics should be without. I'm leaving my copy in the studio lobby, where hopefully it will become dog-eared and well thumbed, an inspiration to any young engineer who wants to do what I did: build a Recording Architecture studio!

For the price of a good quality plug-in, you can get a unique reference book that can help you understand recording studios and how you may be able to develop yours. It will also give you something to read when rendering files while you wait for the new edition of SOS to come out.