The Recording Secrets Behind 50 Great Albums

Recording Secrets (ISBN 978-1-61713-041-0) is published by Backbeat Books, a subsidiary of Hal Leonard publishing, and is edited by Kylee Swenson Gordon, a well-known US music journalist. Its content is drawn from material first published in Electronic Musician, Remix and EQ magazines, and the title pretty much explains what you can expect to find within its pages. The interview-style text is divided into 30 chapters, each comprising a mini interview-format documentary on the making of a classic album — or sometimes multiple albums by the same artist. There are a few monochrome photographs to break up the text but the chapters are short enough to keep you interested. 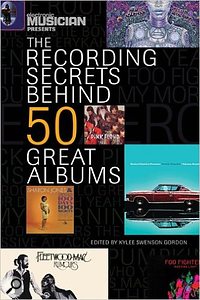 The choice of albums is nothing if not eclectic, ranging from vintage Pink Floyd, The Who, Aerosmith and Fleetwood Mac to more contemporary artists, including Imogen Heap, The Foo Fighters, Massive Attack and Smashing Pumpkins. There are around eight pages dedicated to each chapter, and though this is generally a light and easy read, some interesting technical snippets come to light, such as the fact that the Fleetwood Mac Rumours album was worked on over such a long period that the master tape was worn out before the album could be mixed (all the top end had vanished), so the final version was painstakingly pieced together from safety copies. I also enjoyed reading Pete Townshend's contribution on how he records his guitar, and Imogen Heap's insight into her unique approach to recording.

Of course, many of these artists have been interviewed in Sound On Sound as well — and, I'm proud to say, usually in a little more depth than space allows in this book! — but it never hurts to read up on this subject, and if you can't resist 'behind the scenes' features focusing on producers, engineers, artists and classic recordings, you'll find plenty to enjoy here. Because each chapter is relatively short, it's also the kind of book you can easily dip in and out of when you're in the mood, and it's sensibly priced, given what's on offer.