The Graphite is Samson's first foray into the world of keyboards — and it's an impressive debut.

Samson are a company usually associated with sound reinforcement: PA systems, microphones, mixers, amplifiers and the like. The Graphite 49 and Carbon 49 keyboards represent Samson's first foray into a burgeoning market of MIDI controllers, and it's their flagship Graphite 49 that's under review here.

The Graphite is aimed at the musician who wants hands-on control over their arsenal of MIDI instruments and devices, be they of the software or hardware variety, but who doesn't wish to break the bank to get it. Its well-appointed collection of sliders, knobs, buttons and pads seems quite generous in this price range, yet there is actually more control power than meets the eye, as we'll see in due course.

The Graphite is USB bus-powered, and can optionally be powered from a 9V, 300ma PSU (not included). It can also be connected to an iPad using Apple's Camera Conversion kit (which also supplies the Graphite with USB bus power), forming the basis of a truly portable app-based mini-studio. Graphite features nine sliders, eight rotary encoders, 16 buttons and four pads, all of which are assignable. Five additional transport buttons provide remote control for DAWs, although these can also be reassigned to other functions if desired. Connections on the back panel consist of a USB port, a 9V PSU input, a sustain pedal jack input and a MIDI Out socket for communicating with old-school hardware devices.

The Graphite is of all-plastic construction, with a distinctly retro appearance reminiscent of transistor radios from the 1970s. Being plastic, it weighs next to nothing; a mere 4.6kg, barely more than two bags of sugar. Despite its materials and light weight, it feels well made: the sliders glide smoothly, and the buttons and detented rotary encoders feel positive. I was also pleased to discover that the four-octave velocity-sensitive keyboard, though light to the touch, is appreciably more pleasant to play and less noisy than those found on certain instruments costing considerably more — and it's responsive to aftertouch into the bargain. Even better, aftertouch isn't restricted to the standard aftertouch CC, it can be reassigned to any MIDI CC number you choose. 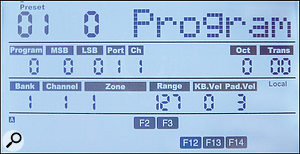 The Main mode display shows a wealth of information, updating the status and values of tweaked controls in real time.

The Graphite has four modes of operation: Main, Preset, Setup and Zone. Main is the default 'playing' mode; in all other modes the keyboard and controls are given over to editing functions. There are 30 preset setups available, the first of which configures the sliders and encoders as volume and panning controls respectively, across MIDI channels 1-8. Presets 2-10 are preconfigured to work in conjunction with specific makes of DAW, of which more later; the remaining 20 are user programmable. Selecting presets is not as immediate as it could be; you have to enter Preset mode first, then select the required Preset either by scrolling through the list using the data buttons, or by inputting numerals via the lowest octave on the keyboard, pressing the Enter key twice and waiting a couple of seconds for it to load. Not so convenient for quick changes in a live situation, then, but not so crucial in a studio context. Whilst in Preset mode, the keyboard is muted and all the controllers become inoperative until you return to Main mode. Curiously, the user presets have only numbers, not names, and there is no facility to name them, either. This is odd, as the LCD display is otherwise very informative, therefore you'll need to keep a note of your own creations elsewhere, or if you're below a certain age, commit them to memory.

The Graphite's keyboard can be split/layered by up to four Zones. Zone 1 is always active, whilst Zones 2-4 can be active or not, as required. The settings are, unsurprisingly, made in Zone mode, and is as simple as selecting each Zone's on/off status, and setting their lower and upper ranges via the Graphite's keyboard. Other adjustable parameters for each Zone include Program Change, Bank, MSB, LSB, Port, MIDI Channel, Octave Shift and Transpose.

Presets are edited in Setup mode; note that Presets 1-10 are not editable, only User Presets 11-30 give full access to the assignable functions of the Graphite's sliders, knobs, buttons and pads. While we're on the subject, only 20 user presets does seem a bit mean. These days it's not unusual to have more than 20 software instruments at your disposal, with possibly a selection of hardware synths, so unless your DAW has in-built controller mapping facilities for plug-ins (Sonar's ACT, for example) the 20 presets may not cover all your needs.

The editing process is hampered by one significant annoyance: the parameter changes you make to each physical control must be saved before moving on to the next control. After each saving, the display irritatingly reverts to the default parameter. When adjusting the same parameter for several controls one after the other, this requires a lot of button-pushing to get back to where you want to be each time.

Rather than the eight sliders commonly encountered, the Graphite goes one louder with nine, which will appeal to anyone wanting real-time control of the drawbars on a Hammond clone. The sliders can also be set to Drawbar mode, inverting their volume response to mimic the behaviour of organ drawbars. As a welcome bonus, the Graphite provides a second bank of sliders and knobs with individually assignable functions, effectively doubling the number to 18 sliders and 16 knobs; the two bank select buttons switch between slider/knob banks A and B. Again, organists using a dual manual instrument will reap the benefit, having control over the drawbar settings of both manuals, rather than just one.

The four velocity- and aftertouch-sensitive pads and the 16 function buttons are individually assignable to send either note data or controller data. The pads use aftertouch to send continuous controller data, though I found this exhibits a curious quirk: rather than pressure generating values from 0-127, the lightest pressure sends a value of 127 first, before jumping down to zero and climbing again from there. This is probably not an intentional design feature, so hopefully Samson will be able to fix it, so long as the Graphite can be updated via USB, of course! There is also a second bank of four pads available, toggled via a dedicated button. One other issue with the pads is that accurate control over velocity is fairly hit-and-miss, despite the provision of several different velocity response curves. Having said that, I've found this to be a common problem with similar pads on numerous other devices. Like the pads, the behaviour of the function buttons can be momentary or toggled on/off. In the case of buttons and controller data, the CC number is assignable; in the 'on' state, a value of 127 is sent, in the 'off' state the value returns to zero. Rounding off the Graphite are the usual pitch and mod wheels, plus transpose and octave shift buttons, the latter of which extend the keyboard range by plus or minus four octaves.

Most MIDI controllers provide remote control of basic DAW functions, and the Graphite is no exception. Having selected the appropriate factory preset for your DAW, the available functions are Transport controls (the five buttons to the panel's lower right), level control of audio tracks 1-8 (sliders 1-8), track mutes (buttons F1-F8) and track solos (buttons F9-F16). This all worked exactly as advertised, using preset number six (Cakewalk) and the bog-standard Mackie Control surface template in Sonar. Preset templates for other DAWs include Logic, Pro Tools, Cubase, Ableton, Reason, Traktion and Digital Performer.

Notwithstanding one or two clunky operational aspects and the pads' aftertouch issue already mentioned, the Graphite acquits itself well overall, offering more control potential than you might expect in this price bracket. The lengthy preset selection method and lack of preset names tend to suggest it's more suited to the studio than for live use. Nevertheless it's highly likely to find favour and fortune as a portable keyboard controller for iPads and other forms of portable music-making, especially as it comes bundled with a generous 3GB of sound-making potential in the form of Native Instruments Komplete Elements. If you're in the market for a lightweight but inexpensive controller keyboard with plenty of tweakable controls, the Graphite qualifies for the job and is well worthy of consideration.

It's a crowded market for controller keyboards, with literally dozens to choose from, so I'll just give a couple of examples. At the low end of the price bracket, M-Audio's Oxygen 49 offers all the essential controls, yet keeps things relatively simple and is very good value for money. Rather higher up the price chain is Novation's SL49 MkII, which provides not only a comprehensive array of hands-on control, but also a sophisticated controller mapping system for VST plug-ins.

Graphite's generous complement of assignable controllers, light weight and iPad compatibility make it a good choice both for studio use and spontaneous music-making on the go.