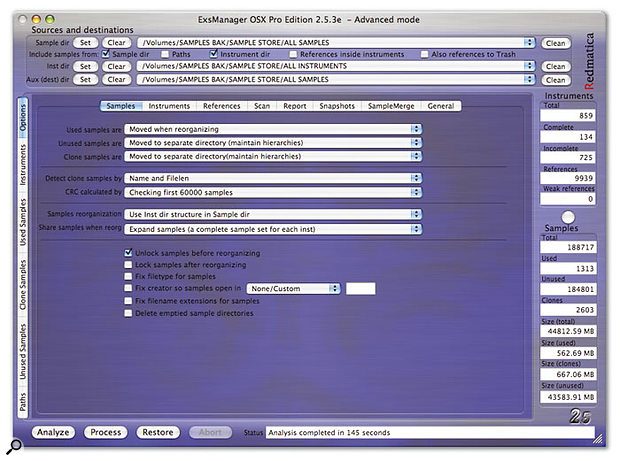 Software samplers such as EXS24 have all but replaced their hardware counterparts, thanks to the increasing power of computers and close integration with host sequencing software. Many of us now have huge sample libraries which can resemble a rarely-visited attic or garden shed — all sorts of things thrown in with the intention of tidying up later!

If you recognise this scenario, you probably have several instruments where some or all of the samples are missing or damaged, and very likely a few gigabytes of duplicated samples. This obviously isn't too serious in these days of cheap disk space, but Logic has to hunt through this sample jungle every time you want to hear a new instrument, and with some of the orchestral collections now available it can have up to 250GB to tramp through. Similarly, if you take your project to someone else's Mac to work on it, you could be in for a long wait while Logic tracks down the samples you have used in your track. Redmatica's EXS Manager is a utility for matching up your instruments with their samples so that Logic can load them almost instantly. It can also help you organise and optimise your sample collection.

Now, those well-organised folks among you will be smugly comfortable in the knowledge that you have already used Logic 's very own excellent Project Manager to compile a database of all the files you need, including matching up EXS instruments and their samples. Others may not have got around to letting Project Manager do its thing — which, with a large library, can mean several days.

EXS Manager is a very efficiently coded utility which offers you the choice of just linking instruments with their samples or going further and tidying up samples in a variety of ways, to optimise disk space by eliminating repetition, and also weed out damaged or incomplete instruments, all in a two-click process. You can do all of this in Project Manager, but you have to do it one function at a time. And, what's more, function for function EXS Manager 's algorithms leave Project Manager standing. Some speed test results are posted on their web site: Redmatica claim operation speeds 100 times faster than Project Manager, performing a full re-link of about half of the vast Vienna Symphonic library (260,000 samples in 5000 instruments) in under five minutes. My own more humble comparison on a much smaller selection gave nine seconds versus 12 minutes — a mere 80 times faster. Suffice to say that the main limiting factor is going to be the speed of your hard disk.

There are two modes of operation: simplified and advanced. In simplified mode you only re-link your instruments and samples. EM asks for the folder where your samples are and the folder where your instruments are. The latter will be the Sampler Instruments folder in your Logic folder if you are doing a whole library. I chose the EXS factory sounds as a test, copying them first to another disk so that they would all need updating. Pressing the button marked 'Re-link' does what it says on the tin. Depending on the size of library and the speed of your computer and disks, it may take a few minutes, but my small test selection sorted itself in seconds. Going back to Logic and EXS24, I found new instruments loading gratifyingly fast — almost instantly.

Your Place Or Mine?

Instruments stay as they are, while your samples can be moved or copied to a different location and stored in new folders as you desire. The possibilities are too numerous and esoteric to cover here, but you are sure to find a structure to suit you from the pop-up menus on the samples page. You can choose whether to delete or carefully catalogue unused ('orphan') and clone (duplicated) samples.

There are two stages. First EM analyses your selection, which is done very quickly, whereupon you can have a look at the comprehensive report on the status of instruments and samples, which is clearly presented in tabbed pages. You can proceed immediately to process your selection, and your files will be linked and re-organised. As with Project Manager, it is wise to choose to delete emptied folders as you go (an automatic option), or you can end up with your disk looking mighty crowded. Apart from this, a lot of data gets shifted at a keystroke. A 'snapshot' option allows you to return to the original state if you change your mind.

If your instrument can't find its samples at the first pass, you can use different criteria to match them up. These will probably be slower than the default of 'name and length', due to the number-crunching involved, and it would be reassuring to have some feedback from a progress meter. You have the choice either to conserve disk space and share samples as much as possible, or ensure that every instrument has a complete set of samples to itself, even if this involves duplication. I felt that this 'belt and braces' approach was not necessary with such a powerful search engine, but it's nice to have the choice.

A batch process option allows you to set the creator code of your samples, so that when you double-click a sample, it will open in the editor you have chosen for that file type. You can 'spring clean' your disk of empty folders too.

Your EXS24 library is composed of instruments and samples. While the instruments are 'definition' files, the samples are the actual sounds, and are therefore much larger. Logic can only read instruments from the Sampler Instruments folder in the main Logic program folder. Some people keep their samples here too, and when EXS24 translates Akai discs for you, it puts the samples by default into the Akai Samples folder, although you can (and probably should) move your samples to elsewhere on your system. Each instrument contains a reference to its own samples, so if you move the samples you need to tell the instruments where to find them.

It is good practice not to store data (songs, instruments, samples) alongside your applications, and many users now have their whole sample library on an external drive which can be carried around and harnessed to whatever computer they happen to be working on. If you choose to keep your library on an external disk, you need to have a way of updating the Sampler Instruments folder in the main Logic program folder. A good way to achieve this is to put all your instruments into a folder on your library disk and create an alias of that, which you then rename 'Sampler Instruments' and put into your main Logic program folder. Incidentally, if your samples happen to be in the original too, it doesn't matter, since Logic will only display the instrument files it finds in there.

Core Audio in OS X currently has a limit of 8192 sample files open at a time, which also limits your use of EXS instruments. Redmatica have cleverly realised that as EXS can use regions contained in whole files even for multisamples, they can combine whole instruments sets into a single file up to 2GB in size, effectively doing away with this restriction. These new combined 'Samplemerge' files, which are given an extension of '.EX2', have to be made from AIFF or WAV files and not SDII s. You can edit these files, but it is recommended that you perform edits on the originals and re-Samplemerge them, so I would keep them for instruments you have already fine-tuned. The EX2 format is not as yet supported by Emagic, so use it with care as its future may not be guaranteed.

Organisation and backing up are not what most of us would choose to do on a Saturday night, but it can save a lot of anguish later on, and having your instruments' links up-to-date can save hours of valuable session time. It's possible that a more interactive interface to the software could help us through this data-handling minefield — not all of us are used to this sort of IT management problem. Still, EXS Manager makes all this relatively painless while still offering a lot of flexibility. I found that printing out and reading the PDF manual is to be recommended — it certainly helped me get my head around the concepts involved. Redmatica have very helpfully included half a dozen 'how to' examples of typical operations at the back.

The performance of EXS Manager reminds me of the big boost that Gallery software's Samplesearch brings to Pro Tools users, and I suspect that Andrea Gozzi at Redmatica has a few more interesting ideas up his sleeve. I fully expect this application to mature into an essential part of the Logic samplist's armoury, possibly with a more interactive and graphic interface, but even now it is a powerful tool to have if you are interested in optimising your EXS24 use.

EXS Manager is an essential piece of 'back office' kit if you have a large EXS24 library. There's quite a learning curve, but it isn't going to get any easier than this! You'll soon save the purchase price in working time and disk space.