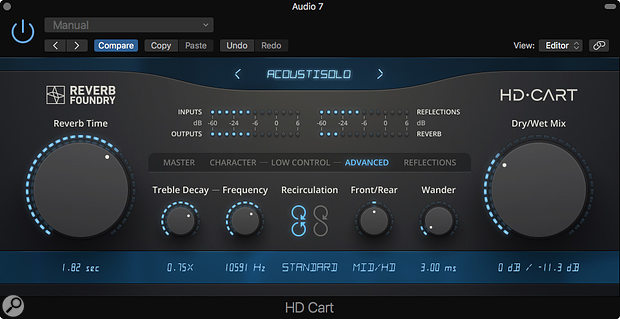 There are quite a few emulations of the classic Lexicon 480 hardware reverb that was used on so many recordings in the 1980s, but not all of them model the optional Surround Cart that greatly extended its capabilities. HD Cart from Reverb Foundry is intended to fill that gap, recreating the cartridge and thus “the only algorithm to ever fully take advantage of its considerable dual-board processing capabilities”.

As its name suggests, one of the features that the expansion in question added to the 480 was surround capability: the two engines could be split to give quadraphonic configurations, with a 5.0 routing option that created a centre channel from the left and right surrounds mixed to mono. Alternatively, both engines could be combined to create high-density stereo reverbs not available on the standard 480. In stereo modes the reverb can be moved to the front, centre or rear of the emulated space.

The plug-in has five control groups called Master, Character, Low Control, Advanced and Reflections, which are accessed using tabs below the meters and select different aspects of the reverb for editing. Master oversees the filtering and the relative levels of the various reverb components, while Character adjusts the behaviour of the virtual room in which the reverb is taking place. Low Control addresses the room’s behaviour at low frequencies, while Reflections relates to the timing and tone of the front and rear early reflections.

A large Reverb Time knob is always accessible, as is the wet/dry mix balance, while the smaller knobs address different functions according to which tab is open. All the expected parameters such as pre-delay, diffusion, stereo spread, filtering, modulation and so on are available, while the Advanced tab includes more unusual controls that affect the high-frequency decay, Recirculation (which circulates the front and rear reverb synthesis separately or feeds them into each other), front/rear Balance and Wander (modulation amount). Current values for the controls are displayed below them, and there are separate meters for input level, early reflections and reverb tail.

Though you have the option to use a faithful recreation of the original algorithm, the developers have also added a little magic of their own to extend its capabilities, including ‘enhanced recirculation’, which is designed to create a more spacious reverb, and additional filtering control for the early reflections.

When loading one of the factory presets, there’s the option to turn enhanced recirculation off if you want to get closer to the sound of the original at the expense of some reverb ‘richness’. There’s also a choice of front, rear or mid placement and whether or not the mix control is active or the reverb is 100 percent wet.

When it comes to signal routing, the mono option generates a mono output by summing all four outputs from both reverb engines, while the stereo-out modes sum the left and right outputs of each processor and the quad-output mode uses one engine to provide the front signal in stereo and the other the rear. Routing options provide for quad and 5.0 inputs as well as mono and stereo though, as noted earlier, the 5.0 mix is really a ‘trick’ mix of quad with an additional synthesized mid signal. Most users will probably use the stereo-out mode, and the refined algorithms that combine both engines sound particularly good. The tweaks the designers have added to the algorithm certainly do something very positive to the reverb as can be heard by comparing with the authentic ‘untweaked’ settings.

Even though the Lexicon 480 is positively ancient by digital processing standards, it definitely had a certain something and that is well represented here. Turn on the algorithm tweaks and the reverb quality stands comparison with far more modern reverb units, and though it might not be the best choice for emulating a specific acoustic space, HD Cart sits perfectly in a music mix. Whether or not you think it worth the outlay depends on what reverbs you already own, but if you revere the original 480 sound, you won’t be disappointed.