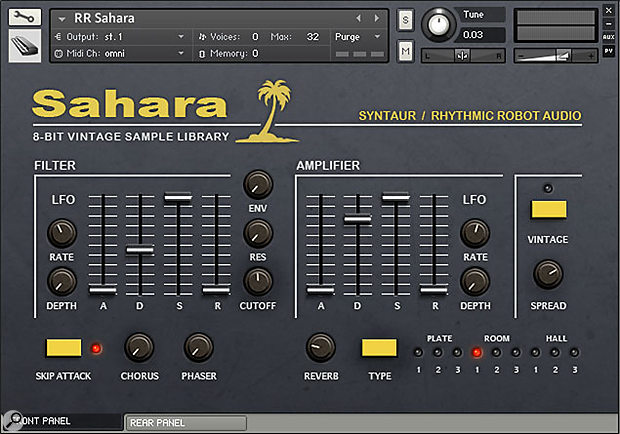 Much of the appeal of low-bandwidth, 8-bit sample libraries lies in their imperfections; nowadays it’s easy to obtain samples recorded at high sample rates with long wordlengths, but sometimes a little bit of grit and noise is just what the mix needs. Mind you, if you were to try to buy an 8-bit sampler today you’d find surprisingly few available: fully functional Fairlight CMIs (Series I, II and IIx), Emulators and Emulator IIs are exceedingly rare. So perhaps your only options would be one of their much cheaper, upstart competitors, the Ensoniq Mirage DSK-8 and DSK-1 keyboards or their rackmount sibling, the DMS-8 Mirage Rack. This isn’t as bad as it might seem; despite their tiny memories, ghastly operating systems and (by today’s standards) laughable capabilities, the various Mirages continues to prove that larger numbers don’t necessarily mean better sounds, not least because their factory samples are surprisingly good. Consequently, Sahara is exciting not just because it promises to make those factory sounds available to a much wider audience, but because it does so in a form that makes it much simpler to sculpt them into new and, as I was soon to discover, very pleasing forms.

Its layout is well designed and clear. On the front panel you’ll find a resonant low-pass filter and an amplifier, each controlled by a dedicated ADSR contour generator and LFO, three effects (chorus, phaser and reverb), and a Skip Attack button that, not surprisingly, skips the initial samples of a sound for a more percussive attack. The final two controls are a Vintage button that disables all of the contours, LFOs and effects to play the raw samples, and a Spread knob that pans low notes to the left, high notes to the right, and all stages in between. The ‘rear panel’ tab boasts two more effects (delay and rotary), this time with a degree of control, plus sliders for the velocity response of the loudness and filter cutoff frequency, and two knobs that control the rate and depth of pitch modulation applied using the mod wheel of your controller keyboard or the equivalent MIDI CC.

The underlying multi-samples — nearly 8GB of audio comprising nearly 24,000 items — were produced in collaboration with Syntaur, a Texan company that hold the rights to the Ensoniq library. (If you’re still using a Mirage of one form or another, you can buy these as three sets of 3.5-inch diskettes for $99 per set.) So I compared Sahara directly to the factory sounds that have survived in my DSM’s library and, from the first sample that I tried, I was impressed. I tested everything from basses to strings to vocal samples and much in between, and found that the samples have been re-recorded faithfully, right down to the original flaws and occasionally dodgy loop points. Notwithstanding the move from analogue filters to digital ones, Sahara not only captures the underlying sound and the unexpected warmth of the Mirage, but also its sometimes imperfect soul.

Having all of these sounds available in Kontakt confers at least two enormous advantages over the original instruments. The first is the user interface. Instead of struggling with a two-character LED screen and all of its arcane messages, everything now falls to hand. You want a gentle attack? Move the slider. You want to change the filter cutoff frequency? Turn the knob. To be honest, I did more with these samples in a few days of testing Sahara than I had in the past three decades on the Mirage itself. The other major advantage is the ease with which Kontakt allows you to layer sounds and detune them against one another. For example, I took two vocal sounds, tuned one up by a fifth, extended the attacks on both, closed their filters a little, and added chorus and reverb. The results were gorgeous, and I can guarantee that I would never have discovered this sound using the original instrument.

Rhythmic Robot’s claim that “Sahara is the Mirage recreated” is a bit over the top because you can’t record new 8-bit samples as you can on the original, nor does it include the Mirage’s sequencer. (Had the Mirage been merely a factory sample player in the same way as the 360 Systems Digital Keyboard and the DK Synergy the claim would have been closer to correct.) Nonetheless, I don’t want to belabour this because, for many musicians, the Mirage was just a sample player and, given its operating system, I can’t say that I blame them for that. Consequently, I’m going to make just one complaint; there’s no documentation, and the only clue as to what’s going on appears in the optional tool tips that appear when you hover over a knob, slider or button. If you asked me what type of filter has been implemented in Sahara, I couldn’t tell you. The maximum and minimum contour times? The nature of the chorus and phaser? The maximum LFO speeds? I haven’t a clue! One could argue that, if the sounds are good (which they are) the numbers are unnecessary, but I would prefer to know what I was dealing with when programming. That quibble aside, I can wholeheartedly recommend Sahara to anyone who has the hard-disk space and is a fan of the Mirage.