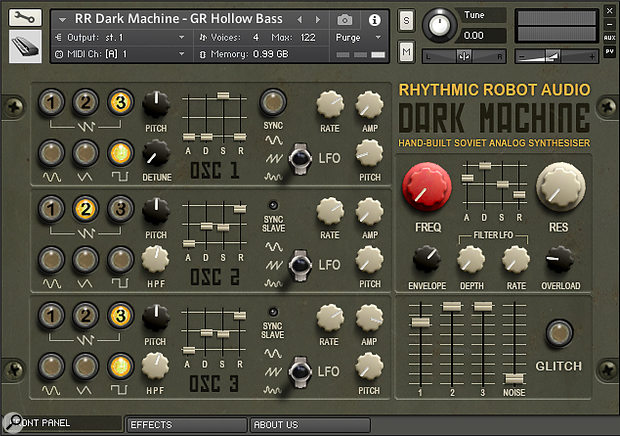 I spend much of my life trying to create the cleanest sounds possible so, when Rhythmic Robot Audio asked me whether I would like to try something that is intentionally noisy, crackly, glitchy and unstable, I was taken aback. However, I had been impressed with the company's recent recreation of the Ensoniq Mirage, so I thought 'what the heck', and downloaded and licensed Dark Machine.

This is a Kontakt instrument based upon samples lasting typically between 40s and a minute, obtained from a damaged Soviet-era monosynth that was poorly maintained and suffers from crackles, frequency drift and other problems. The amazing thing is that, whereas most people would have walked away from this, RR saw an opportunity to create an unusual polysynth, retaining all of the sonic nasties suffered while capturing the unusually dark tone of the original instrument.

Each of Dark Machine's oscillator groups offers up to six simultaneous waveforms, making it capable of replaying up to 18 waveforms per note. You can detune the waves in oscillator 1 slightly against themselves as well as against oscillators 2 and 3, and RR have added dedicated high-pass filters to oscillators 2 and 3 so that you can add some 'thin' components in which the defects are more obvious to the fatter signals coming from oscillator 1. The waveforms adhere only loosely to the descriptions on the control panel but this is in the nature of the original synth, so no problem there. However, the square wave looks like it was sampled through an ADC with a DC filter, which is a hanging offence in my book.

As expected, the factory sounds veer toward the dark and moody...

Each oscillator group has its own ADSR amplitude contour as well as a dedicated LFO that affects its amplitude and pitch. The outputs from all three groups are then mixed, further noise generated by a Korg 770 can be added if wanted, and the output from the mixer then passes to a resonant 24dB/oct filter section. This offers an Overload control to overdrive the filter input, plus a fourth ADSR contour and LFO to affect the cutoff frequency. The output from this then passes to an effects section that comprises simultaneous chorus, phaser, delay, rotary speaker, amp/cab modelling and Lexicon-inspired reverb, plus a control to determine the stereo spread. The final parameters are the amount by which velocity is sent to the filter cutoff frequency (brightness) and the loudness of the note.

As expected, the factory sounds veer toward the dark and moody and, if you fancy allowing the Dark Machine to cook you up something new, a button named Glitch is actually a randomiser, albeit one that — thanks to what RR call 'intelligent randomisation' — is more likely to give you sensible and useful results than most. But, sticking with the factory patches for a moment, there's a surprising amount of depth here for everyone to enjoy. The pitch instabilities in some of the samples can add unexpected warmth to the sounds and, as for the crackles and other problems, these will appeal to the glitch generation. The chaps at RR describe it as a "deliberate step away from clean, anodyne synthesizers" and, while I would hesitate to accuse synthesizers that work correctly of being anodyne, I can see what they're trying to say.

The real strength of this synth lies in its underlying tone and its unusual architecture. Eschewing a standard VCO/Mixer/VCF/VCA signal path in favour of a VCO/VCA/Mixer/VCF path with four independent contours and LFOs gives it an unusual character that invites experimentation, and I obtained some fascinating sounds from it. In these days of conformity and seemingly endless recreations of vintage synths, it's good to see (and hear) someone trying to do something different.