The original Chord module, reviewed in SOS February 2017 by Jyoti Mishra, offered an excellent way to get polyphony and, more specifically, CV-controlled chords into your modular system. It proved popular enough for Qu‑Bit to develop the idea further. Enter the Chord V2. 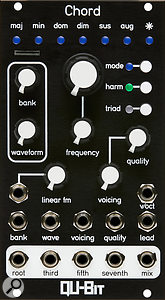 Qu-Bit Chord V2: 14HP. +12V 122mA, -12V 25mA.The basic premise hasn't changed. A four-note polyphonic oscillator is tuned, using a handful of controls, into a cornucopia of chords. Each note of the chord appears at its own individual output and at a mixed output, so you can choose to process each note separately or all together. The root note is controlled by a standard 1V/Oct input, along with coarse and fine tuning controls.

The module has been reduced in size from the stocky 28HP of the Chord V1 to just 14HP. That's half the original size. As you'll see, Qu‑Bit have done a lot of work improving the concept. I won't spend the rest of the review comparing old to new; just assume that everything covered from here onwards is new to V2.

At the centre of it all is a wavetable oscillator. As it comes from the factory, there are five wavetables, and three synthesized waveforms with wave-shaping, plus an additional eight user wavetables. Qu‑Bit call these Banks, although each is essentially a single wavetable. You can import your own wavetables using the front-mounted Micro-SD reader. The card that comes with the unit has user tables pre-loaded, giving you a total of 16 different Banks to choose from. Waveforms will smoothly interpolate as you scan through the wavetable using the Waveform knob, or the accompanying CV input. There's also a knob and CV input for Bank selection, although this doesn't interpolate like some other wavetable oscillators do. Further waveform mangling can be achieved using the linear FM input, which has its own attenuator.

The big focus, of course, is on the chord and polyphonic capabilities. The default mode (known as Chord mode) works by taking the frequency derived from the coarse and fine tune, plus the 1V/Oct input, and using that as the root note for a seventh chord. The chord type is selected using the Quality control. As you sweep the Quality knob, LEDs highlight the chord type at the top of the module: major, minor, dominant, diminished and so on. If you don't want the seventh, you can enable Triad mode, which will mute the fourth voice. You can also spread the notes of the chord out using the Voicing control. There are 17 different spread settings, which can be selected from the front panel or the appropriate CV input.

In Chord mode, the module acts like a chord memory, but things get interesting when you apply CV control to the Quality and Voicing. Complicated cascades of chord types tumble out with just a small amount of sequencing. If this were the only function of Chord V2, it would still be a great module.

The second mode is called Melody mode. When enabled, the fourth voice is decoupled from the other voices and can be played independently. This is done by applying a 1V/Oct CV to the Lead input, and means you can sequence triad chords and add a separate melody over the top.

The third mode is Polyphonic mode. There are two variations of this. In the first, called Free Poly mode, each of the four voices is entirely separated. The Coarse, Fine, Voicing and Quality controls become tuning for each of the four voices and four of the CV input jacks become 1V/Oct inputs. The second variation is called Unison Poly mode, and will lock all four voices to the same frequency, using only the CV inputs to tune and sequence the frequencies.

If you enjoy chord sequencing, you're going to love it. Everything from Detroit techno chord structures to unpredictable jazz odysseys tumble out with a minimum of effort.

Going back to Chord mode for a moment, one particularly interesting feature is that you can program your own chord tunings. These can include microtonal chords and alien tone clusters, or whatever tunings your heart desires, and there are eight slots for custom chords. This can be done either by editing text files on the micro-SD card, or by entering a special mode on the module, during which you can tune the four voices and save them back to a user slot.

At times, the module can feel complex. There are so many modes that knobs, inputs and outputs have to be repurposed, their panel labels no longer indicating their correct function. Frequent manual consultation is unavoidable.

In summary, Chord V2 is an impressive module which combines a four-voice wavetable oscillator with a throng of intelligent and flexible voicing features. You could use it as a simple chord-memory oscillator, a chord plus melody generator, a four-voice unison oscillator and, of course, the core of a four-voice paraphonic or polyphonic setup (assuming you can afford enough filters and VCAs).

If you enjoy chord sequencing, you're going to love it. Everything from Detroit techno chord structures to unpredictable jazz odysseys tumble out with a minimum of effort. The ability to add your own wavetables and chord types should keep the interest levels up, even when you've explored everything else the module has to offer. Overall, Chord V2 is a splendid and worthwhile update to a popular module. I've no doubt it will sell well.