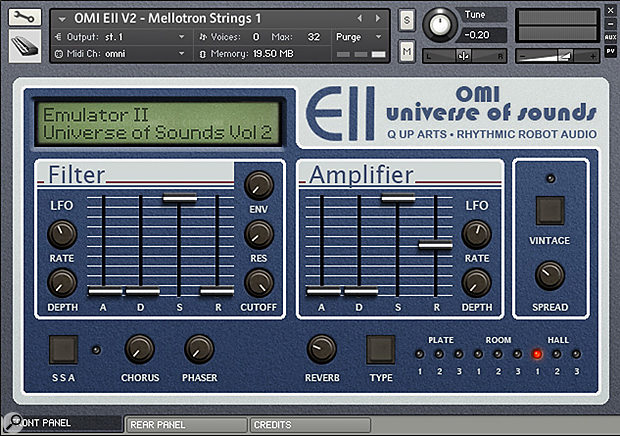 Rhythmic Robot strike again — and with a double whammy! I can only speculate about this labour of love, feeding an Emulator II with a near–endless supply of 5.25–inch floppy disks (the genuinely floppy type) then sampling every note. In the patches where velocity is mapped to filter response, multiple samples were taken to better capture the sound of the original filters, exploiting Kontakt’s morphing capabilities in preference to its own filters.

While the sampling of this venerable machine was performed at 24–bit, RR have sensibly dithered down to 16–bit for the final package. Even with this size reduction, the two volumes total a massive 20GB, the downloads partitioned into manageable chunks of 1GB. (This represents approximately double the amount of data once Kontakt’s lossless compression is taken into consideration.) I couldn’t help a wry chuckle at the web site blurb describing the library as: “a 16–bit dither of 24–bit recordings of 12–bit conversions of 8–bit samples.”

So what do you get? Well, not the basic Emu sampler library, if that’s what you were expecting. The Universe Of Sounds was a third-party collection created by Doug Morton, here licensed for ongoing Kontakt use. Arguably, it’s these sounds that made the 8–bit Emulator II the mid–’80s sampler we lusted after. Fans of Tangerine Dream, Thomas Dolby, Pet Shop Boys and Peter Gabriel (to name just a handful) are going to hear much that is warm, fuzzy and familiar.

An uncluttered GUI offers basic synthesis and effects, the highlight of which is a mid–’80s convolved Lexicon reverb. Although effects are tastefully employed to enhance each patch, the purist option is available too in the form of a ‘Vintage’ button. With a click you can have plain mono, effect–free sounds just as they originally were. Alternatively, to explore the creation of new patches from this vault of material, the SSA (Skip Sample Attack) button tells Kontakt to ignore the samples’ distinctive start portion, leaving the sustained part for processing by the filter and effects.

Volume 1 contains over 540 patches, divided into the categories Bass, Bells & Chimes, Brass, Drums, Ethic & Folk, FX, Guitar, Piano & Keys, Orchestral, Percussion, Strings, Synth and Vocal. A batch of Multi patches have been assembled too, just for the fun of it. It soon becomes obvious that this isn’t a collection to audition quickly; these patches are made to be played, their odd sample transitions exploited rather than reviled, the sometimes clicky loops taken as creative challenges.

The huge spread of offerings begins with basses that cry ‘Stock, Aitken & Waterman’, followed by chimes and tinkles that wouldn’t disgrace a modern library. If you’re like me and find most sampled brass almost as tasteless as the synthesized variety, there are beauties here that could change your mind. Amongst the scoops and Yello–like stabs are gems such as ‘horns of doom’, its raspy bottom end undiminished by the passing decades.

Many of the drum samples stand as a brutal lesson in how tastes have changed but, looking on the bright side, the cymbal rolls and bowed gongs have not aged as badly as the thwappy, mullet–propelled toms. More varied material is found under Percussion, its stonking metal hits a lure for Depeche Mode tribute bands everywhere. The various shakers, tablas, resonant synth blips and assorted pots and pans are all pretty groovy too.

Skipping past the horror of the bagpipes, you’ll find several enduringly impressive ‘ethnic’ entries; these include a gorgeous blown bottle, the obligatory pan pipes and classic Shakuhachi. Several of the latter’s keys trigger two layered samples, which is fairly unpleasant — but in keeping with the ‘warts and all’ philosophy. Honourable mentions go to the thumb piano, waterphone and wine glass, all of which are thoroughly playable.

In contrast, I doubt the guitar and keyboard samples were ever considered highlights, but they’re here for completeness. The orchestral samples, though, are a different matter; they gave artists of the ’80s powerful new sounds, and the hits and chords still sound immense. One immediate favourite patch was ‘orchestral finale’, a keyboard’s worth of slamming samples begging for a modern context.

It gets even better with a great selection of strings. In particular, the rich, resonant cellos, creepy pizzicato plucks and atmospheric tremolo patches cut through beautifully. They’re a testament to the original recordings and performances as well as to Rhythmic Robot’s gentle noise–reduction techniques. Notable synth samples include Solina strings, wavering PPGs, the lovely ‘Streich Choir’ patch and a fabulous Fairlight choir.

Volume 2 is slightly smaller, but still contains over 530 patches in the same categories. It fills in some of the gaps of the first, contributing improved piano sounds, gamelans, a generous dose of African percussion and yet more metal bashing. But for me its best entries are the eerie solo strings, wood flutes, a whole host of other strings (including Mellotron) and a superior selection of vocal samples. Were I forced to choose just a single volume, this one’s strings and choirs would probably give it the edge.

Fortunately, both are available separately and if the price is rather higher than Rhythmic Robot’s usual offerings, this doesn’t seem excessive given the sheer enormity of the task (involving around 70,000 individual samples). By insisting on faithful reproductions of the originals, both collections have a smattering of clicks, crackles and glitchy loops, but despite such imperfections, they sound fantastic! The originals pushed the limitations of the technology, memory and media to create sounds of real character. The strings and brass, in particular, are blessed with exactly the right kind of raw wonkiness to make them credible instruments in their own right. Sure, not everything has stood the tests of time, but for every cheesy banjo or saxophone, there’s a throaty Mongolian monk or classic synth sample to love. Whether you’re writing ’80s retro tracks or you simply love the sounds of the Emulator II, these collections should prove invaluable. Paul Nagle