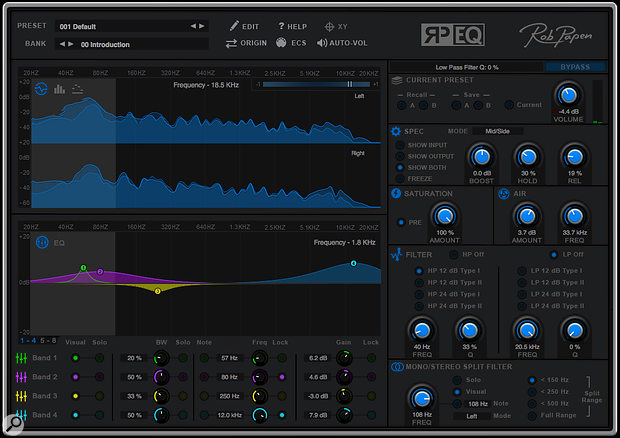 Soft-synth specialist Rob Papen has branched out into the world of processors — but his RP EQ is no ordinary equaliser.

Rob Papen is perhaps best known for virtual instruments such as Predator and Blue, which have found favour with many EDM producers. However, Papen’s range of ‘soundware’ also includes some interesting effects and processing plug-ins, the latest of which is RP EQ. At its heart, it’s a multi–band parametric equaliser, aided and abetted by functional high- and low-pass filters and a particularly musically effective ‘Air’ high-end boost option. These tools are further complemented by a generous collection of extras: a saturation emulator, a mono-stereo split filter, visually stunning programmable LFOs, and a limiter, all presented via an informative spectrogram display, and deployed to sometimes inspired purpose on some inventive presets.

Papen rightly boasts that his creation is “far from a bread and butter EQ”, but thankfully, for all the starry blue dazzle of its graphics, RP EQ tackles bread-and-butter EQ tasks with an audio quality to match its flashy style. Indeed, across the spectrum, RP EQ’s response is typified by a silky smooth sound — as, for example, when narrow band boosts are used on the master channel to pull out reluctant kicks in the 50-100 Hz region, delivering punch and clarity without harshness or distortion.

But it’s on vocals that RP EQ is most impressive, and while its core EQ and filters are reassuringly smooth even when applying fairly severe gain reduction in problem regions, special mention must be given to the effectiveness of the Air option, particularly when deployed on lead vocals. Essentially a boost at an extremely high (above 30kHz) centre frequency, Air’s wide Q can reach like a saving hand down into a mix’s cluttered high-mids and pull a lead vocal out to safety, adding precision, clarity and life with a subtle and warm grain. If this approach proves too bright and lively for your tastes, it’s possible to strike a sympathetic balance between the Air function’s clarity and the darker character of its neighbouring saturation emulator, itself especially effective when used pre-EQ.

RP EQ’s core EQ section is also a rich mine of control-option functionality. Alongside the ability to drag or dial in the tiniest adjustments to bandwidth, frequency and gain, RP EQ boasts some useful additional functions, such as its solo visual option, which allows you to zero in on a single EQ band and examine its spectrogram in isolation, and the option of identifying a frequency band by note name rather than frequency.

Beyond the core EQ section, the first thing many users will notice is RP EQ’s 30-band spectrogram, which will display your choice of input and output signals, left-right signals, Mid-Sides signals and filter cutoff settings, as well as metering for phase correlation — another small but welcome extra. Again, this represents a wealth of sonic detail presented with precision graphics, and although the spectrogram can be CPU-hungry, it’s a simple single click to switch it off.

The mono-stereo split filter can be a powerful tool, especially in contemporary dance music production, where combining a mono low end with ultra-wide stereo high frequencies can give the impression of ever-more-epic width. Having split the source into mono and stereo elements, RP EQ provides four EQ bands to apply to each side of the divide, while the ability to separate the spectrogram into mono and stereo frequency sections by superimposing a greyed-out area to one side of the filter is another impressive and useful detail.

If the core EQ, Air section and split filter can enhance your mix with satisfying results, RP EQ’s X–Y screen can take EQ application into the world of sound design. Indeed, it may be something of a leap into the unknown for those unfamiliar with the use of low-frequency oscillators (LFOs) in synthesizers.

By controlling EQ parameters via two programmable LFOs to enable time-variable EQ adjustments, the X–Y screen enables users to transform a static sound source into a percussive element, introduce movement into a sound field, or dynamically transform the character of pads, loops and sub–mixes, with sometimes inspired effect. Key here is the visually impressive X–Y pad, which offers a deep range of control. The pad can be programmed manually, by dragging the mouse, or looped, sync’ed, quantised or smoothed, and if that sounds too complex, the banks of inventive X–Y presets are a great creative enhancement. In particular, the EQ-shifting X–Y loops found in the ‘XY effects’ bank and the subtler ‘Oddiction’ bank can be a revelation to scroll through, injecting movement and energy into lifeless pads and static beats.

More Than An EQ

With so much on offer, it seems a shame to mention the plug-in’s down sides, but I do have some minor bugbears. It’s a shame, for example, that the high- and low-pass filters are segregated off from the core EQ display. This may effectively afford the user the luxury of simultaneously running 11 — count ’em! — EQ bands, but it can be disconcerting flying blind without a visual representation of your high-pass filter.

Another irritant is the unnecessary intrusion into the working process created by the plug-in opening with a default preset running. In the interests of subtlety and maintaining something of a sound source’s ‘natural’ character, many engineers’ preferred working method will be to open an EQ plug-in set flat whilst listening to the original source and then apply subtle changes from that point, an approach which is undermined by the sudden interjection of the default preset’s massive 12kHz boost.

However, these flaws are outweighed by the quality and depth offered by RP EQ’s major features, and the further creative control delivered by some easily overlooked extras: RP EQ’s saturation option will add creamy thickness to the bottom end, and while it can be a little murky, this can be offset by dialling some breathing space back into the upper spectrum with the Air section. Meanwhile, the Recall option enables two sets of settings to be saved during work, allowing one to A/B two saved sets of EQ parameters against each other, pick a winner, adjust again and repeat, edging ever nearer to the ideal sound destination while avoiding the risk of getting lost en route.

Impressive in its functionality and rich in visual information, RP EQ’s high-quality sound and wealth of creative options make it a great EQ and more besides.

A great EQ, complemented by an array of creative sound-design features.