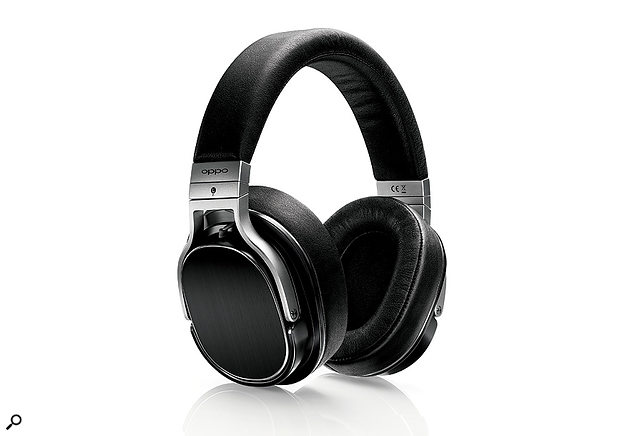 If you’re wary of using closed–back headphones for mixing, this stylish design might just change your mind.

Until recently, planar magnetic headphones were looking like a technological dead end, but within the last year, several pairs have crossed the threshold of SOS Towers, and all have impressed in their way. Costly they may be, but Audeze’s open–back LCD–Xs are quite simply the best headphones I’ve ever heard; while at the other end of the price spectrum, Fostex’s T–series phones outperform some conventional designs costing much more.

Price–wise, the latest contenders in this field fall into the very wide gap between the aforementioned products. Oppo’s PM–3s are pitched against high–end dynamic phones from the likes of Beyer, AKG and Sennheiser, many of which are very good. Do they have what it takes to tempt musicians and engineers away from more familiar names and designs?

First impressions certainly suggest a classy product, albeit one perhaps more targeted at the hi–fi market than at studio owners. The PM–3s ship in a very stylish fitted box, and come with a robust–looking carry case made of ‘selvedge denim’ (whatever that is), “manufactured using vintage shuttle looms by a supplier for a number of boutique clothing brands based in Europe and Japan”. Nice.

No fewer than four cables are supplied, two of which have built–in mics and volume controls and connectors designed to plug into Apple and Android phones. The remaining cables are one short, lightweight, straight affair, which terminates in a conventional mini–jack, and a 3m version of the same, with a removable quarter–inch barrel. The phones themselves connect via another standard mini–jack, so should you wish for something longer or curlier, it shouldn’t be too hard to find a cable that works.

The PM–3s are closed–back phones, and compared with either the Audeze or the Fostex designs, they are surprisingly compact. The earcups are padded and free to rotate both vertically and laterally, and I found them pretty comfortable for long periods of wear. They also offer a good level of isolation.

Lend Me Your Ears

Historically, one of the challenges that designers of planar magnetic phones have faced is that it is difficult to make them as efficient as moving–coil models, so they tend to be quieter given the same electrical input. This isn’t such a problem with the PM–3s, which hold their own level-wise against many dynamic phones, presumably thanks to the use of “an FEM–optimised magnet system with very high–energy Neodymium magnets”. The specs quote a sensitivity of 102dB for a 1mW input, and with a nominal impedance of 26Ω, they are relatively easy to drive.

Another traditional limitation of planar magnetic designs is a tendency for the frequency response to drop off significantly at the top end of the spectrum. Personally, though, I’d much rather forego the very highest frequencies than be subjected to the brutal 10kHz rasp that some moving–coil models subject us to in the name of ‘air’ or ‘detail’; and while the PM–3s aren’t completely flat to 20kHz, neither are they noticeably dull–sounding. As with most planar magnetic phones, the focus is on the mid range, though they are not as even across this part of the spectrum as the Audeze LCD–Xs. My impression was of a boost somewhere in the upper mid range, and a certain amount of tubbiness in what you might call the ‘upper bass’ region. True bass was a bit lacking when auditioned through my MacBook’s built–in headphone amp, but sounded a lot more solid on Oppo’s own HA–2 (see box).

I can’t, in all honesty, say that the PM–3s sound as good as the LCD–Xs. They don’t have the same openness, tonal neutrality or jaw–dropping musical dynamics — but then, neither are they open–backed phones costing the thick end of £1500. A fairer comparison would be with Audeze’s closed–back EL8s, and here, I think, the PM–3s will actually have the edge for many listeners. The EL8s have, to my ears, a more exaggerated treble boost, a bit further up the mid range than that of the PM–3s, and sound somewhat tinny in comparison. Certainly, the PM–3s’ response never deviates from the flat so much that you wouldn’t quickly learn to compensate when mixing.

Although they’re not in the same “you could get a perfectly good motor car for that!” price bracket as the LCD–Xs, you couldn’t call the Oppo PM–3s cheap. Spending several hundred pounds on a pair of headphones is something most of us do only infrequently, and then after lots of deliberation! If you are considering only mixing and critical listening applications, and you can carry these out without your headphone spill annoying other people, then I think that a good pair of open–back phones will probably offer more by way of forensic insight. In the real world, however, there’s a lot to be said for a quality pair of headphones you can use during tracking sessions and on the train as well as in the control room. The PM–3s are as useful a mix tool as any pair of closed–back phones I’ve tried, and they are stylish, solidly built and portable into the bargain. 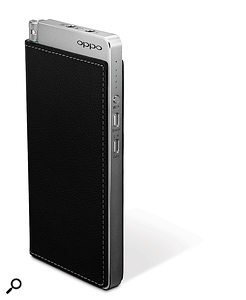 Along with the PM–3 headphones, Oppo sent their HA–2 portable headphone amplifier, which turns out to be quite a neat device. The DAC built into the HA–2 supports PCM sample rates up to 384kHz, and can also stream single–bit DSD audio at up to 12MHz, if you can find an audio application that will let you do so. A rotary volume control doubles as an on/off switch, and two slide switches select low and high gain, and an optional bass boost. The HA–2 has an internal battery, which charges in about 90 minutes using the supplied ‘rapid charger’ and can provide back–up power for a connected mobile phone. According to the specs, this battery can power the HA–2 itself for up to seven hours when connected to a digital source, or 13 hours otherwise.

The HA–2 can derive its signal from one of three sources: Type A and B USB sockets, or an analogue mini–jack. Usefully, when one of the USB inputs is selected, this mini–jack becomes a line output instead of an input (there’s no way to use it as an input for recording). The HA–2 is class–compliant, so Mac or iOS users can employ it as an output device for mixing. It will work on Windows machines too, but as far as I’m aware there are no ASIO drivers, which could hamper its usefulness for music–making purposes.

Housed in a stout metal case protected by a non–removable leather sleeve, the HA–2 is just a shade larger than your average iPhone, and looks for all the world like an expensive hip flask. Whenever I raised it to my lips, alas, single malt did not issue forth; but sound certainly did, and with impressive clarity and volume. In high–gain mode, it could drive the PM–3s far, far louder than my ears would tolerate without audible distortion or coloration, and it achieved a more than respectable level with a 250Ω pair of Beyer DT250s.

Despite their hi–fi styling, the Oppo PM3s definitely have a role to play in the studio if you need a pair of good–quality closed–back phones.