Rhythmic Robot continue to produce Kontakt instruments with a decidedly old‑school feel and tone, the latest described as a 'Source Variable Drum Synthesizer'. Grit Kit is built from a series of sampled synthesizer waveforms and drum machine transients replayed from three vintage samplers; the Ensoniq Mirage, Akai S950 and the Ensoniq EPS. Given the lo‑fi nature of some of these elderly chunks of hardware, it seems slightly perverse that all the samples are captured in 24‑bit perfection, but that's so the quirks of the machines concerned are rendered exactly 'as is'.

A Grit Kit kit comprises just 13 different drums with the most complex being the kick and snare, as you'd probably expect. The main screen is occupied with these and supplemented by a simple output limiter, with sampled hiss added for extra authenticity. Actually, the hiss component is well deserving of inclusion as, combined with the limiter, it helps to create an impression of the kind of wonky, breathy sample loops often obtained from old analogue drum machines.

The kick and snare are built from three separate ingredients; a sampled synth waveform and attack transient (taken from an unnamed vintage drum machine), plus sampled noise. Putting them together won't give you infinite drum sounds, but the results can be pretty diverse. The secret to Grit Kit's appeal lies in the small buttons labelled '8', '12' and '13' underneath each sample. These correspond to the three samplers used to capture each and every waveform: the 8‑bit Mirage, the 12‑bit S950 and the 13‑bit EPS. You are free to mix and match playback of each component and for every drum sound, rendering those simple waveforms into crunchy, aliased monstrosities even before you take any other action. There's just enough synthesis supplied without it becoming a chore to manipulate. A simple multi-mode filter and envelope take care of basic tone and shaping, with distortion provided as the only instrument‑level effect. Fortunately that's not the whole story because Grit Kit is fitted with a series of large, unlabelled knobs whose purpose is to supply all the grit you might need, and then some!

At the Grit knob's far-left position, the samples are heard as cleanly as the respective samplers can deliver them. Turning the knob gradually towards the 12 o'clock position introduces 'character', in this case the character that appears when a sample is transposed downwards. RR have used audio editing software to keep the pitch constant (there is a separate pitch control for occasions when transposition is required) and therefore 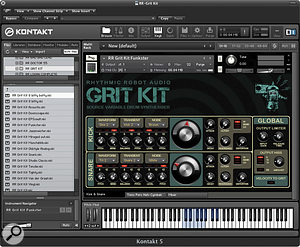 the artifacts introduced are those typically added by the sampler's downwards transposition — this invariably translates to extra crunchiness. From the mid-point of the knob's travel, a new factor is introduced: overload. By overloading the input stage, mild clipping and then full‑on digital distortion creeps in — I say 'creeps' but, at the maximum, it's as angry and aggressive as the gnarliest pit bull on a string. For conjuring drums with attitude this knob is going to see lots of maxed‑out action. Click the 'Velocity To Grit' option and incoming note velocity is directed towards the Grit knob for simple but effective dynamics. Although the toms, percussion, cymbals and hi‑hats are simpler in implementation, each group has its own Grit knob and corresponding set of samples obtained from each machine.

There are 16 example kits provided, the main disappointment being that they aren't all spread over the keyboard as a single instrument. A simple mixer screen sets the level and pan of each voice, with a choke control to prevent open and closed hi‑hats from sounding simultaneously, unless you want them to.

I found it took me a while to adjust to Grit Kit's character — nasty 8‑bit samplers replayed via Kontakt don't immediately settle into the consciousness — but as time passes and you tweak each kit to taste, they grow on you and start to find their own sonic niches. At times it's like you've discovered a treasure trove of battered yet unknown drum machines, gently rotting but still capable of cutting through. Perhaps the largest surprise is the price of £34.95. I realise there are over 1200 samples taken from many different waveforms, transients and different flavours of noise and I'm not belittling the effort taken to make them, but I've always found the appeal of Rhythmic Robot's range starts at its affordability; the price takes the edge off what is otherwise a fun and attractive source of old‑style‑yet‑unique drum kits. As with all RR's instruments, Grit Kit requires the full version of Kontakt, version 4.2.3 or later and it's not compatible with Kontakt Player. Paul Nagle