Roger Mayer has an impressive resumé, having built effects for Jimi Hendrix and Jimmy Page back in the day, and he continues to develop new ideas. One of his latest to make it into production is the 456 Solid-state Analogue Tape Emulator — or simply '456' — a product which is designed to replicate the harmonic distortion behaviour of Ampex 456 tape. The simulation even mimics the way said behaviour changes at different recording levels, but doesn't include secondary effects such as tape hiss, or wow and flutter.

The single-channel 456 comes as a pedal-style box, with simple unbalanced quarter-inch input and output jacks, and can be used 'in-line' when tracking or mixing. It runs from an included 48V DC external power adaptor that can accept all standard mains voltages. Two 456s can be used in a pair for stereo processing, but a dedicated stereo, half-rack model may well have been released by the time you read this, along with a dual-mono unit. The signal-to-noise ratio is quoted as 96dB and the frequency response and impulse performance exceeds that of analogue tape. The nominal output level is +4dBu. A plot of harmonic distortion against level is included in the manual, and clearly shows that the second- and third-harmonic curves are quite different, with the third harmonic coming in more strongly at higher drive levels, just as with tape.

Being all analogue, the 456 is entirely free of latency, and its circuitry has been designed to have a very wide audio bandwidth (-3dB points at 10Hz and 100kHz), which Roger says is essential to capture the true transient behaviour of analogue tape. Positive and negative signal peaks are processed independently, with instantaneous attack and release times, just as happens when analogue tape is pushed into saturation.

Rather than offer a selection of tape speeds and bias settings, the 456 has a large Threshold knob to adjust the virtual recording level, plus a three-band EQ offering Bass, Treble and Presence controls. Roger suggests that you think of these as mastering EQ controls. There's no metering or output-level adjustment: the recording level is set using the audio interface, preamp or mixer channel to which it's connected. Roger recommends leaving at least 4dB of headroom when setting levels, as he doesn't believe that a typical DAW's meter is fast enough to accurately register all the transient peaks. In practice, you can afford to leave more.

Internally, a six-layer PCB is populated with discrete components, the extra layers of copper PCB acting as ground and power planes and providing a high degree of shielding, further enhanced by the cast aluminium case. Roger has gone to these lengths to minimise the risk of interference from the likes of mobile phones, Wi-Fi routers and other potentially disruptive sources of RF that are present in most studios. All the circuitry is Class-A, and uses selected low-noise transistors, high-tolerance metal-film resistors and premium-grade metalised film capacitors. Additional power-supply filtering is also included inside the box to maintain low noise levels under all working conditions.

Used in-line with a signal source, the 456 can introduce a varying degree of analogue coloration, while at the same time acting as a soft limiter on high signal peaks. All adjustments have to be made by ear, and the lack of a bypass switch or output level control makes 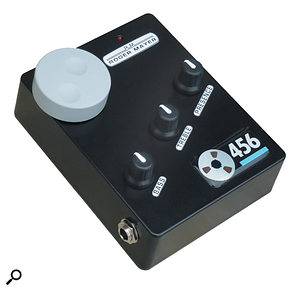 it harder to judge how different the processed sound is from the original. That said, the increase in harmonic content as the threshold knob is adjusted is very evident, starting out with a gentle thickening, passing through big and punchy and ending up with a very obvious, gritty overdrive as the virtual tape reaches full saturation. This is particularly the case on percussive material with plenty of transients for the circuitry to get its teeth into.

I did a lot of listening tests, comparing the 456 with various plug-in tape emulators and saturation devices, and I've come to the conclusion that Roger is definitely onto something, as I couldn't quite replicate the sonic character of his box using any of my plug-ins. Which comes closer to actually sounding like tape is another discussion altogether, but when it comes to achieving what you really want tape to do (rather than what it sometimes actually does!), the 456 is extremely effective, producing musically satisfying results. For examples, real tape can't handle cymbals at high levels because of the pre-emphasis used in the recording chain, whereas Roger's circuit has no such limitation. Drums can be made to sound big and punchy with an apparently different sense of air around the sound, even at lower drive levels. Bass guitar also benefits, sounding somehow fuller and better able to sit in the mix.

Those tone controls are very musical too. They have a fairly limited range compared with most EQs, but that makes it easier to fine-tune the settings to find the sweet spot. Through experimentation, I found that I could get close to the tonality of the unprocessed sound with all the EQ controls turned fully anti-clockwise, though Roger later informed me that the equaliser neutral position is actually designed to correspond to 12 o'clock for both Bass and Treble controls, with the Presence knob set fully anticlockwise. That works too! While limited, the EQ range is still wide enough to fine-tune a mix, and more generous settings are useful for reshaping individual sounds. As Roger says in his manual, if it sounds right, it is right.

For stereo processing, I tried a pair of 456s via my DAW's main mix insert point and used the DAW's 'jellyfish' meter to ensure the left and right balance was the same as with the insert point bypassed. I also set up the DAW so as to maintain the same level when the insert bypass was operated. As with analogue tape, there's a sense of cohesion: mix elements feel better integrated, while the low end fills out somehow, without actually getting louder. Certainly, the forthcoming stereo model will be better suited to this role, and the lack of an output level control here made it harder to balance the levels for A/B checking, but it didn't take long to get good results. Because of the format of this particular box, I'd say that it's most useful for tracking, where it can soft-limit peaks before they hit your converters, or to insert on individual channels for processing during mixdown.

Despite the lack of tape hiss, wow and flutter, and different head-bump settings for different tape speeds (and while I applaud those who aim for authenticity, do we really want those?), Roger has done a great job in emulating what I regard as tape's most important aspect, namely its saturation characteristics and the way these change with the recording level. As a result, the 456 is very effective in providing the punch and sonic 'glue' for which analogue tape is so revered. Paul White