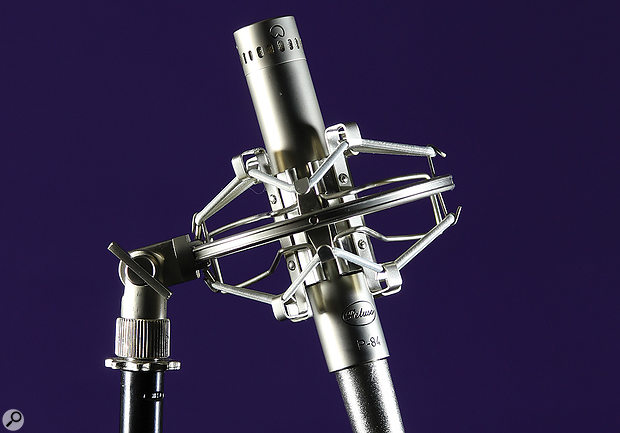 Peluso's enviable reputation for building 'homages' to vintage mics looks set to continue with this tribute to Neumann's classic KM84.

Boutique microphone manufacturers Peluso continue to expand their range of valve, ribbon and solid‑state microphones, all of which are apparently designed and 'hand‑crafted' in America, but with core elements, such as valve power supplies, the metalwork, and the capsules sourced from around the world. Most designs are deliberate 'homages' to established classics with, for example, the Peluso 22 251 being based on the Telefunken ELA M251, the 2247SE on Neumann's U47, and the P67 on the Neumann U67. I've reviewed all of these models in the pages of Sound On Sound in May 2010, September 2007 and August 2012, respectively (you can read these for free by going to www.soundonsound.com).

One of the latest additions to Peluso's range is the P84, and it's not too much of an intellectual leap to spot the branding connection with Neumann's famed KM84. This new mic is a small‑diaphragm (20mm), phantom‑powered, capacitor mic, and is available either singly, or in a stereo kit — the latter being supplied for this review. In either form, the P84 mic is provided in a flightcase, with the mic itself protected within a lined wooden box. Also included are both omni and cardioid screw‑on capsules, plus a pair of mounts (a cat's‑cradle shockmount and a simple plastic clip). The stereo kit obviously doubles up on the mics, capsules and mounts, but also includes a short stereo bar. A bag of 3/8‑inch to 5/8‑inch thread adaptors was also included — perhaps my reputation for complaining about their absence precedes me!

The published (and obviously smoothed) frequency response for the P84 is commendably flat, without any significant presence boost. There appears to be a very gentle upwards tilt of the whole response, though, which gives about 2dB more level at 10kHz than at 100Hz. The mic's response is flat to well below 40Hz, and the specifications give a roll‑off point at 20Hz (but without any amplitude limits). Other published technical parameters give the output impedance as 200Ω, a self‑noise figure of 14dB(A), a sensitivity of 15mV/Pa, and a maximum SPL figure of 142dB (but with no distortion limits given).

These are all a useful step up on the performance of the original Neumann KM84, and are very similar to the current KM184 model. For reference, the KM84 provided 10mV/Pa, maxed out at 123.5dB SPL (for 0.5 percent THD), and self‑noise was 17dB(A) (see box). The P84 requires phantom power (48V, ±4V), of course, and draws less than 3mA (although the KM84 draws less than 0.5mA!). The Peluso mic is also physically larger than the KM84, measuring 22 x 124 mm and weighing 130g, making it nearly an inch (23mm) longer and 50g heavier than its muse. Peluso's logo and model number are etched at the base of the body, with a serial number engraved on the opposite side. (The two mics in this stereo kit had sequential serial numbers.) The capsules are also marked with polar‑response graphics, although this is entirely obvious from the presence/absence of rear entry ports, of course. The body and capsule threads are relatively fine, so there is a risk of cross‑threading if handled carelessly, but the fit seems quite positive and I had no problems during the review period.A handy tip for the inexperienced is to offer the capsule up to the mic body, and then rotate the capsule anti‑clockwise initially (as if undoing it) while maintaining a gentle pressure between the two parts. Half a turn is usually enough; this action forces the two threads to align parallel to each other and the starts of both threads to engage correctly. You can feel the latter as a slight click, after which you can rotate the capsule clockwise to screw it on fully, confident that the threads are properly aligned.

The technology employed in this P84 microphone is entirely traditional. The removable 20mm‑diameter capsule connects to the single‑FET impedance‑conversion circuit, which uses a miniature transformer to interface with the outside world. The capsule connections are via the screw thread on the body and a central spring‑loaded, gold‑plated contact pin. The electronics are secured inside the body by a gold‑plated screw with a low collar that emerges from the chassis terminal of the output XLR (this screw also grounds the metal case to the XLR lug, which is linked directly to the XLR pin 1). Build quality is generally good, for the mic and the supplied accessories. However, the elastic cords in the shock mount are far too tense for the mass of the microphone, and the isolation at low frequencies is disappointingly poor. I achieved noticeably better results using Rycote InVision mounts, which are also considerably more compact and less visually intrusive.

Along with most of the professional studio world, I have long been a devotee of the ultra‑smooth and full‑bodied sound of the Neumann KM84, and I certainly appreciate why it is still held in such high regard. The slightly brighter and crisper attributes of the succeeding KM184 have their place too — I own and use three of them regularly — but the mellow‑sounding vintage mic is often more appropriate in close‑miking applications.

The Peluso P84 is, as you would expect, voiced to sound very similar indeed to the famous Neumann model, sharing a beautifully smooth and un‑hyped high end as well as an extended, slightly warm bass. It is also noticeably quieter than vintage KM84s, with roughly the same self‑noise as a modern KM184. There are subtle tonal differences, of course, but the overall character and attributes are much the same, which was obviously the overriding design aim. I noticed that the P84 seemed slightly susceptible to mobile phone interference — nothing major, and moving the phone more than a metre away cured the problem — but a modern KM184 in identical conditions was entirely 'blippity‑blip' free!

The included omni capsule greatly increases the versatility of this mic, and the same overall voicing character is maintained. The off‑axis response of the cardioid capsule is smoothly progressive and relatively uncoloured, but the omni capsule improves on that as you would expect, and enjoys complete freedom from the subtle LF 'phasiness' that afflicts all labyrinth‑based cardioids. As I was supplied with a stereo kit I checked the microphone matching with cardioid capsules in place, and found them to be very close and well suited to coincident XY applications. The matching constraints are slightly more relaxed for omni capsules, but again, matching was to high standards.

Peluso's decision to supply both the omni capsule and the shockmount in the standard mic kit goes a long way to justifying the high cost of this microphone — although I'd like to see more appropriate suspension cords fitted in the shockmount — but overall the P84 still feels uncomfortably expensive to me. There are many microphones on the market providing a very similar timbre to the desirable 'KM84 sound', from the Beyerdynamic MC930 at the lower end of the price scale up to the Microtech Gefell M300 and Mercenary Audio's KM69 at the higher end... but the P84 is significantly more expensive even than those!

There is no doubt in my mind — or ears — that the Peluso P84 makes a very credible alternative to Neumann's classic KM84, and this mic maintains the high standards of construction and sound quality that we have come to expect from Peluso. It is also supplied in a generously equipped and versatile kit, either singly or as a stereo pair. Personal audition is highly recommended .

There is no shortage of neutral-sounding small-diaphragm mics that many would describe as 'dark' in comparison to the modern trend for brighter, hyped mics. At the lower end of the price spectrum is the Beyerdynamic MC930, with the Microtech Gefell M300 sitting closer to the top of the cost-tree. In between are worthy offerings such as Mercenary Audio's KM69, Josephson's Series 4 C42 and Tab Funkenwerk's AMI F44. Neumann's modern KM184, while brighter than the vintage KM84, remains a very fine and surprisingly cost-effective microphone, though.

An impressive homage to the legendary Neumann KM84, sharing a very similar timbre and supplied in a well‑stocked flightcase, either singly or as a stereo matched pair.