In the P67, Peluso have sought to recreate a bit of Neumann history. Does it offer the same sound that made the U67 a classic? 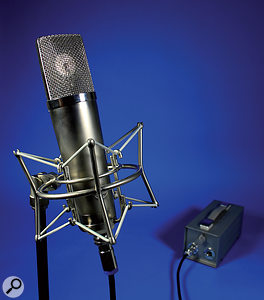 Peluso are American 'boutique' producers of an impressive range of valve, ribbon and solid-state microphones. The man behind the company, John Peluso, has been servicing and repairing vintage microphones for over 35 years, so knows a thing or two about what makes a great microphone great! All of the company's current microphones are designed and hand-crafted in Floyd County, Virginia, using components (power supplies, metalwork, capsules and so on) sourced from around the world, including the Far East. As a result, some of the mics outwardly appear similar to models from other microphone suppliers, and many of Peluso's microphones are deliberately 'styled after' some of the industry's classics. For example, the Peluso 22 251 is based on the Telefunken ELA M251, and the 2247SE on the Neumann U47. Both have been reviewed in Sound On Sound, in the May 2010 and September 2007 issues, respectively.

The subject of this review, the Peluso P67, is 'styled after' the classic Neumann U67 — although this model isn't, perhaps, as well known as it deserves to be, with its predecessor and successor (the U47 and U87, respectively) taking so much more of the glory. See the box for more info on the original U67.

The Peluso P67 retains the conical body and chiselled dual-layer grille shape of its inspiration, with a polished stainless-steel body and chromed grille measuring about 235 x 56mm, and weighing 600g. A glass 'EF style' pentode valve is used, which appears to be a Russian 6ZH1P (an EF95 equivalent), but a metallic Peluso label hides most of the model number. The capsule apparently employs two 34mm gold-sputtered diaphragms.

In place of the U67's recessed switches at the base of the grille, the P67 uses two miniature toggle switches to engage the -10dB attenuator and (unspecified) high-pass filter. The polar pattern is controlled from the remote MX56 power supply (the same unit as supplied with the current 2247 SE and 22 251 models), and it offers nine pattern options instead of the original's three. A winged grey knob switches from omnidirectional to cardioid, with three intermediate positions, and then on via three more to figure-of-eight. The rear of the power unit carries a fused IEC inlet, a mains voltage selector (115V or 230V AC nominal), a large power on/off toggle and a warning light. The cable connector at the base of the microphone accepts a screw-on, eight-pin plug, with a similar but different connector used at the power supply. The audio output is presented on the usual male three-pin XLR connector.

The P67 is supplied as a complete kit in a sturdy briefcase, the mic protected in a wooden box alongside the MX56 power supply, the eight-metre microphone cable, a mains power lead, and a cats-cradle type shockmount with 3/8- to 5/8-inch adaptor.

The manufacturer's specifications claim the microphone can accommodate up to 148dB SPL with the pad engaged, but gives no distortion reference figure. Sensitivity is a moderate 18mV/Pa and equivalent self-noise a reasonable 14dB(A). The included test frequency-response chart shows a substantially flat response extending from 40Hz to 15kHz, with a remarkably gentle presence boost of about 3dB between 2kHz and 10kHz. As a result, the P67 sounds very smooth and natural, but with a slightly bright character. There are no nasty resonances or undue emphasis on any specific parts of the spectrum, which means that this mic plays nicely with pretty much any source, including female vocalists.

The Peluso P67 maintains the high construction and sonic standards I've experienced with other Peluso models. It resembles the original closely enough to remind you of the homage, but not slavishly so, and in fact the styling is a little bit 'blingy' for my taste — although it proved a big hit with a couple of vocalists, who enjoyed it immensely.

Like all valve mics, the P67 takes 10 to 15 minutes to reach the optimum operating condition, but thereafter proved stable and consistent. The sound character is full, rich and smooth, with its solid, well-focused mid-range and crisp, bright top end, balanced nicely by a firm and well-extended bottom end. If I had to sum up the P67's character in two words, I'd say 'smooth and creamy'! I've only used an original U67 a few times, but my impression is that the P67 is slightly brighter. However, its attractive smoothness and mid-range focus is definitely present in the P67.

The high-pass filter seems to roll off the bass gently below about 100Hz, which is useful when close-miking male vocals and wide-band instruments, such as pianos and electric guitar cabs. The mic can cope easily with very high sound levels, especially with the pad engaged, which helps it to serve as a true all-rounder. In fact, there is no application that I would consider the P67 unsuited for.

The Neumann U67 quickly gained a reputation as an all-rounder, often being preferred in tone to its transistorised sibling, the U87. The Peluso P67 maintains that sonic tradition and is a lovely-sounding microphone.

For DIY aficionados, there's the Gyraf G7 build-it-yourself design, which is based partially on the Neumann U67. The Pearlman TM LE, the ADK TC67 AU and the Bees Neez Mahalia all share some U67 qualities, as does the EF86-based Soundelux U99.

Towards the end of the 1950s, Telefunken gave notice that the VF14 valve — the heart of the U47 microphone — was to cease production, so Neumann had no choice but to come up with a new design to replace the very successful U47. That new model was the U60 (yes, you read that right!), and it entered production in 1960, hence the model number. However, after an initial batch of 20 U60s were produced, Neumann's American distributor, Gotham, suggested that it should be called the U67, to capitalise on the popularity of the U47, and so the mic was re-christened and remained in production as the U67 for 11 years.

In designing the U67, Neumann took the opportunity to offer a number of improved features and a new capsule design. The U47 offered only omnidirectional and cardioid polar patterns; if you wanted figure-of-eight, you had to use the U48 model, which offered that as well as cardioid (but no omnidirectional polar pattern). The new U67 was the first Neumann microphone to provide all three pattern options in a single model.

Neumann also redesigned the capsule so it could be constructed in two self-contained halves mounted back to back. The U47's famous M7 capsule had a shared middle electrode, which made tuning the two diaphragms to match each other's performance very difficult. Splitting the capsule into two separate units made diaphragm tuning much easier and far more consistent — and that became the K67 capsule.

Recording techniques had also evolved from the '50s, with close-miking of individual sources now much more common — meaning much higher sound pressure levels reaching the microphone. So Neumann introduced a switchable attenuator between the capsule and impedance-converter circuitry, as well as a high-pass filter to mitigate the increased proximity effect associated with close miking. The valve chosen for the U67's impedance converter was Telefunken's EF86 RF pentode, employed as a triode and driving an output transformer that also included separate feedback windings for greater linearity. Neumann also introduced the now-iconic conical body and chiselled grille shape with the U67.

Transistors and miniaturisation became the indulgence of the 1960s, and there was some pressure to do away with the thick, heavy cables and external power supplies inherent in valve microphone designs. However, it wasn't until the advent of the field effect transistor (FET) that Neumann were able to introduce, in 1967 and '68, two transistorised versions of the U67, called the U77 and the U87. Two models were needed because of the two competing remote power-supply standards: the U87 was phantom powered, whereas the U77 used the now-obsolete AB-powering, or Tonader power system. The U87's capsule differed from the U67's in a few minor details related to the phantom-power scheme, although the original capsule was reintroduced with the U87A model, which went on to become the industry mainstay.

The Peluso P67 is based upon the styling and tonal character of the classic but often overlooked Neumann U67. The homage is a successful one and the P67 is an excellent all-rounder, with a fundamentally flat frequency response and benign, yet enticing, character.