In keeping with John Peluso's policy of building microphones that aim to reproduce the desirable sonic qualities of some of the great 'classics', his company's P49 model is an homage to Neumann's legendary M49, a variable-pattern valve capacitor microphone. Unlike some boutique manufacturers, Peluso doesn't make slavish copies — both the mechanical and electrical details are different, which means that the resulting sound approaches the desired character from a completely different direction. 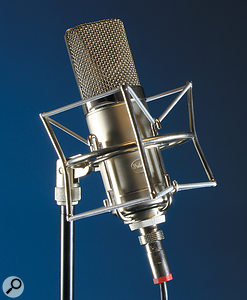 The P49 is supplied as a 'suitcase kit', with the microphone itself protected within a padded and lined wooden box. The kit also includes a typical cat's-cradle shockmount (into which the mic screws via a thread around the XLR base), and the same MX56 power supply unit that is used for most of Peluso's other valve mics, including the 2247 SE, 22 251 and P67 (reviewed in September 2007, May 2010 and August 2012, respectively). The five-metre connecting cable is fitted with eight-pin Chinese screw-lock plugs in a Tuchel style.

Polar patterns are selected with a winged grey knob on the front of the "Hammerite grey” finished power supply, which switches from omnidirectional to cardioid, with three intermediate positions, and then via three more onwards to figure-of-eight. The rear of the power unit carries a fused IEC inlet, a mains voltage selector (115V or 230V AC nominal), a large power on/off toggle switch and a warning light. The audio output is presented on a male three-pin XLR connector, which sits alongside the eight-pin mic socket on the front panel.

Mechanically, the P49 combines a large shiny head-grille mesh with a short, tubular, anodised-brass body. It's not as fat and stubby as the original M49, measuring 205mm in length by 60mm in diameter, and weighing 731g (the original M49 measures 163 x 80 mm, and weighs around 70g more). A major part of the sound of the M49 is directly attributable to its vast head grille and the way the capsule is set within it, simply because of the way it determines internal high-frequency reflections and resonances. Clearly, the P49's slightly more compact grille design will impart a different sonic character — but a microphone's character builds from the sum of the parts, not one aspect in isolation.

Electrically, the P49's capsule is a centre-terminated design, called a PK47 in Peluso's catalogue. It is coupled to an impedance converter built around a miniature wire-ended Raytheon NOS (new-old-stock) 5744EB single-triode valve (the M49 used the renowned Telefunken AC701K single-triode). The output transformer that drives the output is inspired by the BV11 — a design commonly featured in mics designed in the M49 era, including the Telefunken ELA M251 and AKG C12. It appears that the version used in the P49 has a modified turns ratio which provides more output level and more internal headroom than its forebear. These benefits are clearly evident in the published specifications, which cite a sensitivity of 15mV/Pa, maximum SPL of 147dB, and self-noise of 14dB(A). That's around 22dB more headroom than the M49, 6dB more output level, and about 15dB less self-noise.

The M49 is usually described as having a very smooth, warm and creamy-rich sound character, with an airy and silky high end balanced against a solid, weighty low end. When pushed by loud, close sources it enters saturation fairly benignly and even the inevitable distortion sounds elegant! It is, undoubtedly, a very special microphone that has as an unusual 'rightness' about it and represents the classic vintage Neumann sound that we also associate with its close sibling, the U47. On the very rare occasions that examples in good condition come up for sale they typically change hands for well in excess of £5000$8000. Maintaining such vintage mics is increasingly challenging too, not least because AC701K valves are becoming hard to find — although not quite as hard as the U47's VF14s valves… yet! 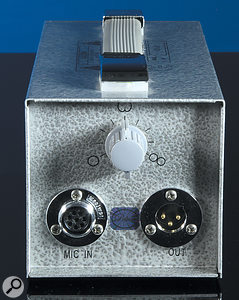 Unlike the original power supply, which offered continuously variable pattern selection, the Peluso has nine discrete settings, which range from omnidirectional, through cardioid, to figure-of-eight.Of course, while the M49 might be considered the perfect mic by many, there are lots of different M49 models (see box), all with different life stories and aged in different ways, which means that they all have slightly different sonic characters. It's the overall character and impression they create that matters, and that's what the P49 is trying to approach. And I have to say that in many ways it does a good job. It does have a smooth mid-range with a fairly creamy sound; the high end is open and airy with a gentle but even presence lift, and the low end is certainly weighty when used close up. With such generous headroom it's much harder to push it into musical saturation, of course, but it does fill out a little in a nice way as things get hotter. I liked it a great deal, particularly on vocals (both male and female) and on acoustic stringed instruments like guitars and cellos, where it delivers a very attractive, full sound.

The P49 isn't an exact M49 replica — I'm not sure anything can be — but it is a very attractive, smooth and flattering mic in its own right, and it does share many of the attributes that made the M49 so popular and desirable. If auditioned simply as a high-quality valve microphone, it will undoubtedly impress with its performance, both technically (it is quite quiet for a vintage-style valve mic) and sonically. If you seek the smooth, creamy silkiness for which the Neumann M49 is known, the P49 gets you a long way down that road too.

The Flea 49 is probably the closest replica of the Neumann M49, with a very closely matched body and grille. However, it uses a replica M7 capsule as standard rather than the K49 that features in the majority of M49s, and an undocumented alternative to the original AC701K valve. The Soundelux E49 is another option. There's also the modern Neumann replacement, the TLM149, of course. 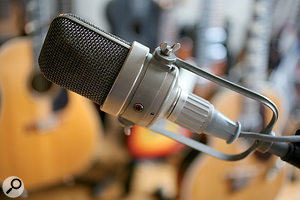 An original Neumann M49. An alternative and innovative biasing technique — the patented brain-child of Dr Herbert Großkopf of Nordwestdeutscher Rundfunk (NWDR) — was acquired by Neumann and introduced in 1951 in the new M49. Essentially, this new system maintained a constant 60V DC polarising bias on the front diaphragm while allowing the bias on the rear diaphragm to be varied continuously between 0 and 120 V DC. This arrangement allowed the polar pattern to be morphed smoothly and continuously between any desired pattern from omni, through cardioid, to figure-of-eight, and with a virtually constant sensitivity.

Initially, the M49 employed an MSC2 valve, but Neumann switched to Telefunken's AC701K in 1954 and stuck with it right up until ceasing the M49's production in 1974. The electronics were mounted on a rubber disc to minimise valve microphony, and the capsule was also decoupled by an internal rubber and Perspex shockmount design, which became a standard feature in all of Neumann's subsequent large-diaphragm mics. The earliest M49s also used the M7 capsule (first seen in Neumann's Bottle mic in 1932, with PVC diaphragms), but production switched to the K49 gold-sputtered polyester capsule in 1956. (The same K49 capsule was also used in the U47 from the same date). Further important upgrades included the addition of a cardioid-only mode (from 1957), which gave a 4dB signal-noise improvement, and a different form of BV11 output transformer (1958) along with some amplifier component value changes. One aspect that remained the same through the M49's life was the sloping and unusually large grille design, which was Neumann's first attempt at minimising internal resonances and provided a much smoother response through the upper-mid and high frequencies.

Twenty-one years after the M49 ceased production, Neumann introduced the M149 Tube microphone, intended as a modern recreation of the revered classic, with a very similar mechanical design. It also retained the K49 capsule, but couples it to a 6111WA valve impedance converter and employs Neumann's transformerless hybrid output stage (rather than a transformer). The polar patterns are switched in nine steps, rather than being continuously adjustable. Although the valve stage was designed to saturate at higher sound levels, the overall sound lacks some of the character and presence associated with the original, despite its excellent technical specifications.

The Peluso P49 is inspired by the famous Neumann M49 and goes a long way towards emulating its smooth mid-range and airy openness, but without aping the latter's unique styling. This is a very attractive and desirable mic in its own right, ideally suited to a wide range of acoustic instruments and unusually effective with both male and female vocalists.