RME are well known for their range of computer soundcards, including the Hammerfall DSP Multiface which is apparently the world's most popular interface for mobile recording applications. However, as this system does not feature any microphone inputs, RME have developed a pair of high-quality, flexible microphone preamp units designed to partner the Multiface when mic inputs are required in mobile recording situations.

The two units are essentially identical except for the number of channels provided: the Octa Mic provides eight channels, while the Quad Mic reviewed here provides just four channels. Both feature discrete Class-A circuitry with impressive technical specifications, can operate on a wide variety of AC and DC supply voltages, and incorporate all the usual facilities, such as high-pass filtering, polarity inversion, and phantom power. In addition, the Octa Mic provides its outputs on a D-Sub connector, and there is also a version which has an onboard A-D converter to provide ADAT optical output.

The Quad Mic is equipped with four balanced inputs on the rear panel, using familiar Neutrik combi-jack/XLR sockets, and can accommodate balanced microphone or line signals. The front panel carries four sets of control sections, one for each channel, with a gain control spanning +6dB to +60dB; three buttons for the filter, polarity and phantom power facilities; and three LEDs showing signal present, clipping, and phantom status. The high-pass filter turns over at 80Hz with an 18dB/octave slope, which is pretty much ideal for reducing mechanical rumbles and the like. The handbook suggests only turning on phantom power when specifically needed, as the +48V generator draws additional current which will reduce the operating time when running on battery power. 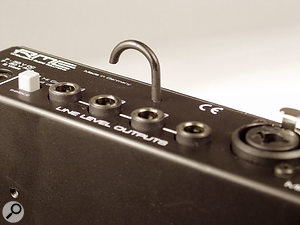 A hook above the line outputs provides cable support, which may prove useful in live situations.Returning to the rear panel, the four balanced line-level outputs are presented on TRS jack sockets, with a button to select +4dBu reference or a Hi Gain mode which provides 6dB more output level, peaking to +21dBu. The only other connector present is a coaxial DC input which accepts 7-38V DC or 7-27V AC — on the same socket! The strange and undocumented wire hook on the rear panel is presumably intended as a cable support.

The unit is supplied with a variety of powering options. The first is a very compact universal switch-mode mains power adaptor, providing 12V DC to the Quad Mic from any mains supply providing between 100V and 240V AC. In the review model, the detachable mains lead was terminated with a European wall plug, but I trust a standard 13A plug will be supplied with retail units in the UK. Also included is a 12V car cable fitted with a cigarette-lighter socket adaptor, and also a separate battery-powering cable terminated in a pair of push-on 6.3mm spade connectors. Since the internal power supply in the Quad Mic employs a bridge rectifier, the polarity of the battery voltage is irrelevant, which is why the spade connectors are unmarked. The Quad Mic consumes 4.6W of power, and with a 12V supply that equates to about 380mA. A small 2.2Ah sealed lead-acid battery is capable of powering the Quad Mic for four hours or more without any change in performance as the battery voltage diminishes. 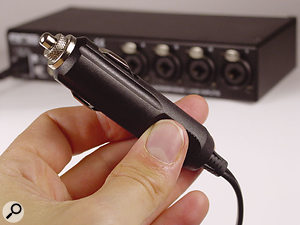 Although most studio users are likely to power the Quad Mic from the included mains adaptor, you can also power it directly from a car's cigarette lighter using another adaptor provided with the unit.

Internally, the Quad Mic is built to very high standards and is contained in a sturdy metal case. The I/O sockets are all mounted on a motherboard covering most of the inside of the box, and this also carries the power supply, input filtering and output amplifiers. A second card is mounted vertically behind the front-panel controls, carrying all of the LEDs, buttons and gain controls, plus the input circuitry. Surfacemount components make up the majority of the internal electronics, but there are also a lot of conventional electrolytic capacitors, discrete transistor pairs for the front end of each mic input stage, and lots of surfacemount op amps. 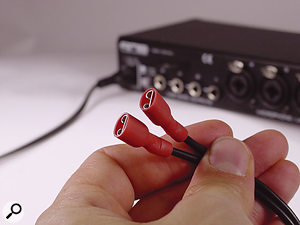 Alternatively connect to a stand-alone battery with the supplied spade connectors.The signal present LEDs appear to illuminate when the output reaches about -25dBu — higher than most console signal-present lamps — and are apparently intended to represent a useful output level. The Clip LEDs light up about 4dB before actual clipping. The handbook states that the lamps come on 2dB before the reference level selected on the rear panel plus a headroom of 9dB. In practice this equates to +17dBu when the Hi Gain mode is selected, and +11dBu in the +4dBu mode.

The rear-panel inputs are handled by a servo-balanced input stage which automatically corrects the gain when receiving unbalanced inputs, and the TRS and XLR connections are effectively in parallel, so either can be used for mic or line inputs. The maximum input level is +11dBu — not high enough to accept the output from a professional recorder or console, but more than sufficient for keyboards and so forth. The outputs are again servo balanced and correct for the 6dB gain loss when driving unbalanced outputs. The standard wiring convention is used, with pin two of the XLR connectors and the tip of the TRS sockets providing the hot signal.

I found the Quad Mic to be a very versatile piece of equipment, which will have a wide range of applications — not just in concert with RME soundcards. The preamps are quiet (the declared input noise is -129dB with a 150Ω source resistance) with a wide bandwidth (5Hz to 200kHz at the -0.5dB points).

The Quad Mic couldn't be simpler to use. Just plug in the mics and hook up the outputs, set the gain and other facilities, and the job is done! The unit appeared to operate with complete stability over a wide range of input voltages — I tried it in the car and on a fairly well-discharged sealed lead-acid battery (borrowed from the garden strimmer!), as well as with the mains power unit. The mic preamps sound clean, with low noise and a useful gain range. The bottom end is not as full as that of a high-end mic preamp, but at this price the performance is perfectly acceptable and compares well to the Mackie XDR preamps in my little 1402VLZ Pro mixer. The high-pass filters are well specified and effective, and the provision of a polarity inversion for each channel is very useful indeed.

The only additional facility that I can think of that would have made this unit more flexible would have been some headphone monitoring, to monitor one or more of the input channels locally. However, in its primary intended role such facilities would be provided by the computer and/or soundcard to which it is connected, so doubling up the same facilities in the Quad Mic would be largely pointless and add to its cost unnecessarily.

If you are in the market for a portable mic pre, the Quad Mic is a nice design, but it is worth bearing in mind that for the same sort of money you could purchase a little Mackie or Spirit desk in the UK, providing a similar number of mic inputs, plus some monitoring controls and auxes too. Having said that, the Quad Mic is a simple and very well-executed unit, with sensible facilities, fine performance, and flexible powering options. It does exactly what it says on the box, and who could ask for more.

A simple but surprisingly high-quality four-channel mic preamp, able to operate on a very wide range of AC and DC supply voltages. Although intended to partner soundcards equipped with only line-level inputs, the Quad Mic will find a far wider range of uses in mobile and budget recording applications.