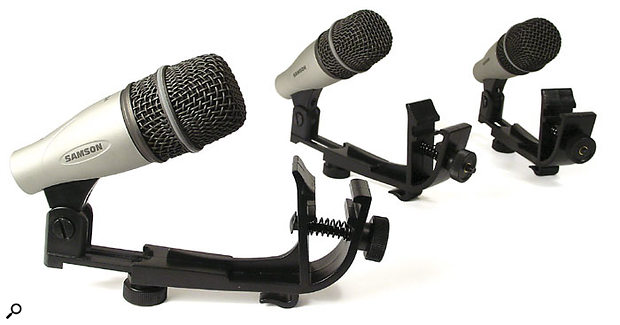 The three tom mics provided in the Q7 set, complete with mounting clamps.

Using traditional mics to record a drum kit can be very expensive, with the mics costing way more than the drum kit itself, but in recent years we've seen some very low-cost drum mic sets here in the UK, most of which are built in the Far East and turn in a very respectable performance. Samson's entry into this area is the Q7 set, comprising a kick drum mic, a snare mic, three tom mics and a pair of capacitor stick mics for use as overheads. Other than the overheads, all the mics are cardioid dynamic models. The attractively styled bodies are cast alloy (for the overhead and kick mics) and plastic (for the snare and tom mics) with a metallic satin finish and topped by dark grey baskets. 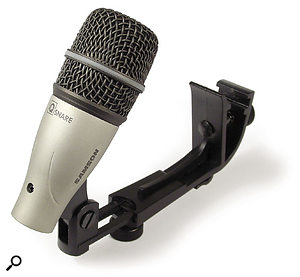 The snare mic shares the casing of the tom mics, but has a different capsule specifically designed for capturing a polished snare-drum sound.The tom and snare mics look identical (apart from the on-body legending), though closer inspection reveals the snare to have a slightly different capsule, which is designed to flatter the unique sound of a snare drum, with all its associated high-frequency components. Both the snare and tom mics come with integral, adjustable plastic clamps, which fit over the drum rim and seem able to accommodate most drums, though the Premier kit we used for testing had very deep rims and the clips only just extended far enough to fit. Using these clips, it's easy to position the mics an inch or so from the drum head and a couple of inches in from the rim, but I'd strongly recommend the use of right-angled XLR connectors, as the straight type tend to get in the way and could get hit during performance.

Like most kick-drum mics, the one provided here looks threatening and bulbous to match its purpose in life, but this is mainly cosmetic, as the capsule seems once again to be a voiced variation on the ones used in the snare and tom mics, this time designed with an extended bass end and a peak higher up to accentuate the hit of the drum. Certainly the physical size of all the capsules is the same. This mic comes with a swivel standmount already attached, and all seven mics feature balanced XLR outlets with gold-plated pins. 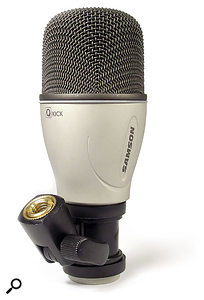 The kick mic has a larger body, but the capsule inside is of similar dimensions to those in the other dynamic mics in the Q7 set.The two capacitor mics (model C02) are small-diaphragm models and feature a tight cardioid pattern. They require 48V phantom power to operate and come with the same stand adaptor arrangement as the kick mic, where the mount fits to a rubbery collar that surrounds the mic, providing security and some degree of shock isolation. The extended response of a capacitor model means that cymbals and snare are likely to be captured with better transient detail than when using a dynamic mic.

When it comes to drum mics, published specs don't mean a lot, because the best-sounding drum mics don't have flat frequency responses, while noise and sensitivity figures become largely irrelevant when the mics are set up inches from a pounding drum kit! We set up the mics to make a recording of a well-tuned Premier kit, and set the snare and tom mics to around one inch from the head of each drum, angled away from the cymbals where possible. Normal damping was applied to the kit using small pieces of tissue and gaffer tape, and a folded blanket was placed in the kick drum. We found the best kick drum results were achieved with the mic almost midway between the back and front of the drum shell and pointing towards the beater, rather than placing it very close to the beater. The overheads were set up a couple of feet above the cymbals — more would have been better, but the room wasn't that high — and they were angled back towards the drummer to stop the cymbals overpowering the sound. 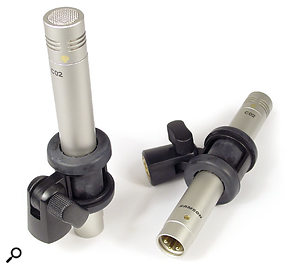 The only condenser models in the set are two C02 stick mics designed to be used as overheads.With no EQ, the sound from the overheads was reassuringly natural, with lots of high-end clarity and detail. All the drums sounded good, albeit a little lightweight, and as expected the cymbals were a little too prominent. Bringing up the kick, tom and snare mics to balance the cymbals produced a very acceptable drum sound, though a little mid-band cut EQ was needed to make the toms sound the way we felt they should, and the kick drum needed just a hint of bass boost and mid-band cut to help clarify it. Within five minutes or so, we had a very decent drum sound, which is impressive from a set of seven mics that costs little more than I'd have expected to pay for a single decent tom mic!

On a practical note, we found we needed to tighten the swivel fixings on all the mic fittings to prevent them sagging, a job easily accomplished using a flat-blade screwdriver, but the rim clips held extremely firmly. The stand adaptors fitted to the overheads and kick mic seemed secure, and offered a degree of resilience without being full-blown shockmounts. All in all, the performance of these mics was impressive. That's not to say you can't get better drum mics, but you'd probably have to spend an awful lot more money to hear a significant improvement. Moreover, because the mics are so cheap, they are very practical for live performance, and if one does get trampled to death by a roadie, it's not going to cost the earth to replace. The rigid, foam-lined box supplied with the mics is plenty tough enough for road use and also provides convenient storage in the studio.

Every budget mic is a compromise, and these are clearly built to a price. However, having said that, these are pretty solidly built, they make light work of producing a respectable drum sound, and they also look good. I also liked the rim clips, though if you have a kit with rims deeper than the Premier kit we used, getting the clips to open wide enough could be a problem. The mics can be bought individually if extras or spares are needed, but, as mentioned earlier, right-angled XLR connectors would really help on the tom and snare mics, as the regular straight types extend the length of the mics significantly and are likely to get in the way of the drummer. The bottom line is that, when you balance the price of these mics against their performance, it adds up to a very good deal, both for project studio work and live performance.

Samson seem to have struck the right balance between cost and performance with these drum mics, and they've also come up with a reliable mounting system. Add that to the good looks of the mics and the whole package becomes very attractive.