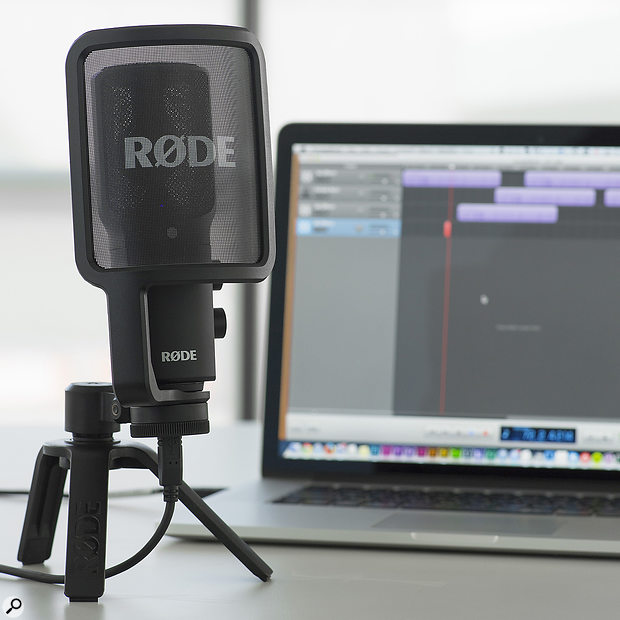 USB mics are becoming increasingly common and affordable, but the quality varies. The Rode brand name, though, is one which instils a certain level of confidence with regard both to the quality of the engineering and the quality of the audio. Like most USB microphones, this one is seen by the computer as a generic USB audio interface (the 16-bit converter can operate at up to 48kHz) which requires no special drivers to work with Windows, OS X or iOS (to work with an iPad you’ll need Apple’s Camera Connection Kit), and recent versions of Android. It’s also powered by the host computer’s USB port and so needs no additional power, and to confirm that the device is on, a discrete blue LED comes on inside the mic’s basket.

In the flesh, the mic is larger and chunkier than some of its photographs might suggest and its metal construction has the same high-quality feel as Rode’s established studio mics. The capsule, set in a side-address configuration, looks to be around an inch in diameter, has a fixed cardioid pattern and is almost certainly a back-electret type. There’s a free two-year extended warranty if you register your purchase on Rode’s web site.

Control and connectivity comprises a USB port, a stereo headphone mini-jack for monitoring, an overall level control and a control to balance the DAW output with the incoming pre-converter mic signal for zero-latency monitoring. In addition to the mic itself, the kit includes a long USB cable, a soft storage case, a very chunky curved pop shield and a desktop tripod mount. The pop shield utilises the locking ring on the included stand adaptor to locate it. It’s also possible to attach the mic stand adaptor to a conventional stand rather than the tripod base.

A modest presence peak at around 4.5kHz aids vocal clarity and the mic can handle up to 110dB SPL, which may not be high enough for recording kick drums but is more than adequate for vocals, acoustic guitar and so on. As with most solid-state mics, the internal circuitry uses a FET in its high-impedance section. The USB port sits at the bottom of the mic — there’s no parallel analogue output as on some similar devices, so you can only use this mic via the USB connection. Although no noise figure is included in the specifications, the mic is more than adequately quiet when used for its intended purpose of close-miking vocals, or even instruments, and compares well in audio quality with hard-wired mics in the same price range. There’s no pad or roll-off switch, though if you need low-cut you can add that using an EQ plug-in within your DAW. The built-in headphone amplifier sounds loud and clean and I can’t see why you couldn’t use an adaptor cable to run a pair of active monitors from it if you really wanted to.

My tests, conducted with GarageBand, showed the mic to output a sensible level when used for speech while still leaving plenty of headroom for vocalists who like to ‘belt it’. The sound is full and open without excessive proximity bass boost when used fairly close up, and the monitoring is first rate, with bags of level in hand. Those who worry about using 16-bit rather than 24-bit converters need have no concerns here because, even with relatively quiet speech, there’s no audible noise and the natural dithering that invariably occurs, due to the very small amount of circuit hiss that does actually exist, ensures that the sound remains undistorted, with plenty of dynamic range. Given its very affordable price, this is a seriously solid piece of kit that sounds great and comes with really nicely designed accessories.