Presented as a three-knob pedal complete with footswitch, the 615 Smooth is designed to work with both instrument and studio outboard setups, courtesy of separate input and output jacks for +4dBu and -10dBV operation (both unbalanced). The -10dBV input is high impedance and designed to match passive guitars and basses, while the -10dBV output can be plugged directly into a guitar amp or recorder. A feedforward gain-reduction topography evolved from the RM 58 Limiter drives a FET gain-control stage. Power comes from an included universal switch-mode 48V power supply; additional filtering is built into the 615 to ensure a clean power source. The signal path is discrete Class A with an upper frequency response approaching 100kHz. Incorporated into the design is a control to regulate the amount of second-harmonic distortion added to peaks to enhance transients. Two further controls set the gain and threshold. As with many of Roger Mayer’s designs, the philosophy is to keep things simple without sacrificing sonic quality, so there are no ratio controls or time constants to worry about and no indicators other than the on/off bypass LED. 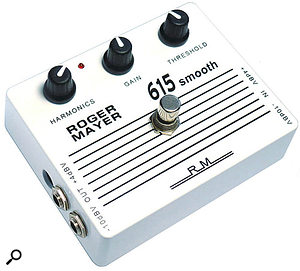 Being a feedforward design, the gain reduction characteristics vary continually with the input dynamics. As some activity is almost always taking place, a threshold LED wouldn’t make much sense. In tests, I started by setting the gain control at around the mid-point, adjusting the threshold control for unity gain. With electric guitar, I found the harmonics knob was best set low or off, as its contribution could detract from the smoothness of the compression. Despite the stompbox format, you shouldn’t dismiss this processor’s studio applications, as it can work very well sitting between a vocal preamp and a recording system to smooth out the recording in a very natural way. It’s also fast enough to work on percussion if you wish. For vocals, bass or percussion, higher harmonics settings may be appropriate, which helps to add a natural sense of presence to vocals in particular. As long as the gain control is kept in the first half of its travel, the background noise level is very low, but there’s a lot of gain in reserve, so if you crank it right up then hiss does become audible.

Perhaps the best thing about this compressor is that, when set correctly, you can’t really hear it working unless you deliberately hit the input very hard. This might seem an odd thing to say, but most of the time it just makes you feel you’re using a better instrument and/or amplifier by increasing the sustain and adding a sweetness without compromising your original tone or killing transients. Used for country-style guitar licks, it can inject an almost pedal-steel-like liquidity into the sound but, again, everything still sounds and feels so ‘natural’ that you don’t really feel like you’re playing through a processor — until you turn it off! It can also be used in front of an overdrive pedal to achieve the sustain you need at lower drive settings. Set more aggressively, you can get that magical effect where notes or chords seem to bloom as they decay. The 615 also excels on bass guitar, evening out the sound without making it obviously compressed.

I have to conclude that, while the 615 Smooth might seem a trifle expensive for a guitar pedal, it’s genuinely classy, and might better be viewed as a sophisticated studio processor that just happens to be presented in pedal format — in which case it’s street price seems a lot more tempting! Paul White