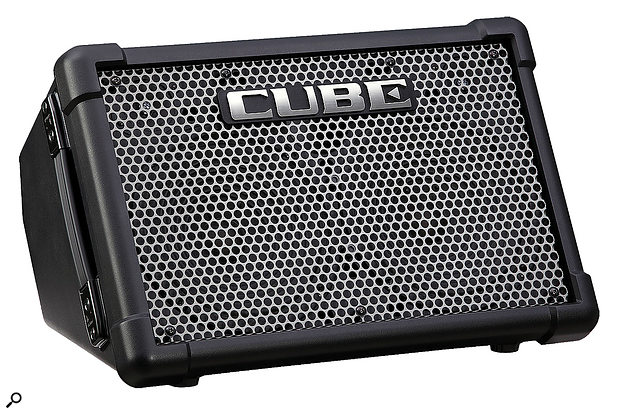 Portability and versatility inevitably mean trade-offs. Have Roland got the balance right?

Battery-operated amps are usually fairly low powered, but by using very efficient loudspeakers they can be capable of surprisingly high volumes. Roland’s new dual-speaker Cube Street EX is rated at a total of 50W (25W per speaker); behind its metal grille are two eight-inch woofers and two two-inch paper-cone tweeters for stereo playback. The amp may be powered from the mains or eight AA-size batteries, and it’s designed to handle microphones, electric guitars, acoustic guitars and stereo backing tracks. A stand mount fitted into one end makes it equally useful as a small PA speaker or extension speaker to an acoustic-guitar amp. Its angled base also allows it to function well as a monitor or busking amp.

A pair of 25W power amps will normally drain a set of AAs in just four or five hours (high-capacity rechargeable NimH batteries would be the most cost-effective option, and should outperform alkaline batteries for playing duration). However, this amp has three power modes: 50, 25 and 10 W. This allows you to minimise the battery drain when you don’t need the maximum power output. The lowest setting gives up to 20 hours of battery life assuming good rechargeable batteries, and there’s a three-LED battery checker, alongside the power-mode and power on/off switches. The battery pack may be removed if required, which makes battery fitting easier, but there’s unfortunately no cubby hole to stash the included PSU. The power connector is the usual push-in coaxial type, with a plastic clip allowing you to secure it so that it doesn’t get pulled out accidentally.

Note, when running from the mains adaptor, that this amp has no ground connection. Experience of my earlier model of Cube Street suggests that fitting an earth wire to the metal panel will help you avoid unpleasant ‘tingles’ when touching the mic with your lips while playing guitar through a separate amp that’s earthed. (This is purely down to a charge build-up. While it can be unpleasant, it’s not dangerous or indicative of a fault.)

Whereas my smaller Cube Street has an MDF case, the EX model has an ABS injection-moulded cabinet, which helps keep the weight down to a very practical 7.4kg. Useful strap handles are fitted to the top and one end, and a soft cover is also available as a cost option.

A clearly laid-out control panel is divided into four channels, two of which can accept balanced microphones via XLRs. Both are fitted with combi jack/XLR sockets, the first of which can be used either as a mic or instrument input and the second as a mic or guitar input. The guitar section uses Roland’s reputable COSM amp simulation to provide Clean, Crunch, and Lead options, but it also includes a setting to make an electric guitar sound more like an acoustic guitar, as well as a clean option that’s voiced for acoustic guitars fitted with pickups. There’s also a (very basic) guitar tuner, and a mic setting that bypasses the guitar modelling. The third and fourth inputs are stereo at line level, one on a stereo mini jack and one using a pair of quarter-inch jacks. These are suitable for connecting a mixer, synth or external playback device such as a handheld recorder, MP3 player or smartphone, making it useful for backing tracks. 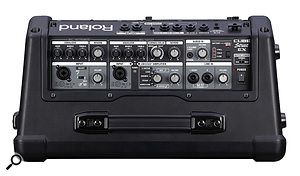 The Cube Street EX caters for most input sources and offers some useful tone-shaping options.The various input sections act as mixer channels, each with its own level control. The first two channels also benefit from three-band EQ plus their own reverb amount controls. Channel two has a further Chorus/Delay control for adding variable amounts of chorus or delays of various durations. The delay level and feedback are preset, though.

While the speakers give some sense of stereo spread, it’s not that much as the speakers are so close together and there’s none of the ultra-wide imaging trickery used so successfully by Blackstar. Using the pole mount also kills the stereo imaging, as the cabinet is on its side, placing one pair of speakers above the other. However, on the rear panel there’s a pair of switchable Stereo Link/Line Out jacks that enable two Cube Street EX amps to be linked as a stereo pair, should you desire greater width. In Line Out mode, these jacks can be used to output the stereo mix at line level, and the mix may also be recorded onto your iPhone or iPad using the Cube Jam app. You can connect optional footswitches via two jacks for activating channel one’s reverb and channel two’s delay and reverb (independently for channel two using a dual switch with a TRS jack), and there’s a further quarter-inch mono aux input jack. This has no level control so must be adjusted at source. A headphone output allows for silent practice.

Sound Of The Street

What’s most important, of course, is how this thing sounds. As a means of amplifying voice, it compares well with similarly sized dedicated plastic-box PA speakers, and it performed perfectly well as an extension to a Fishman acoustic amp playing voice and acoustic guitar. The reverb sounds deep and musical and there’s more than enough range on the EQ to wrestle a decent sound from a typical stage mic. As an electric guitar amp, one limitation is that there’s no separate drive control: once you switch to crunch or lead, the amount of distortion is at the mercy of your guitar’s pickup output. Using the guitar’s volume knob to dial back the grit works OK on the crunch setting but in lead mode no amount of dialling back gets you to completely clean. I don’t think this setting is voiced for people who would want such sounds, though. The tone controls have plenty of range to work with single-coil and humbucking pickups, and you could always use an overdrive pedal with the clean channel if you need more control. In fact the clean channel has a springy, open sound, with a somewhat Fendery character so that would probably be my preferred option. The acoustic emulation is also very usable — importantly, it’s not overdone. 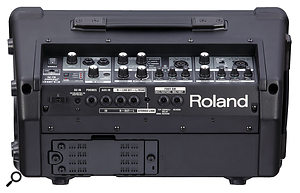 The reverb and chorus on offer here both sound first-rate. Indeed, they put the effects in many more expensive amps to shame. The lowest chorus setting produces an almost 12-string-like shimmer without sounding too obvious. While the delay sounds fine, you can only adjust the delay time, not its level, and for me this was a touch on the loud side.

The frequency range of those eight-inch woofers means the overall sound isn’t in any way thin. Backing tracks sound decent enough, albeit with a slightly ‘splashy’ high end and the usual lack of bass focus you get from small speakers — unless you push the volume too hard that is, in which case your ears are greeted with that familiar plastic-speaker ‘tubbiness’.

The Cube Street EX is a great jack-of-all-trades amp and certainly one of the better battery-powered options. As with any such design, there are compromises, and I wouldn’t choose it if all I needed was an electric guitar amp or a mains-powered PA speaker. When it comes to portability and versatility, though, the Cube Street EX has plenty to commend it.

There are no directly comparable alternatives that offer so many features, but battery-powered amps, intended mainly for electric guitar, are available from Marshall, Orange and Vox, amongst others.

Roland have juggled inevitable compromises to produce a sophisticated and versatile, small and lightweight portable amp.