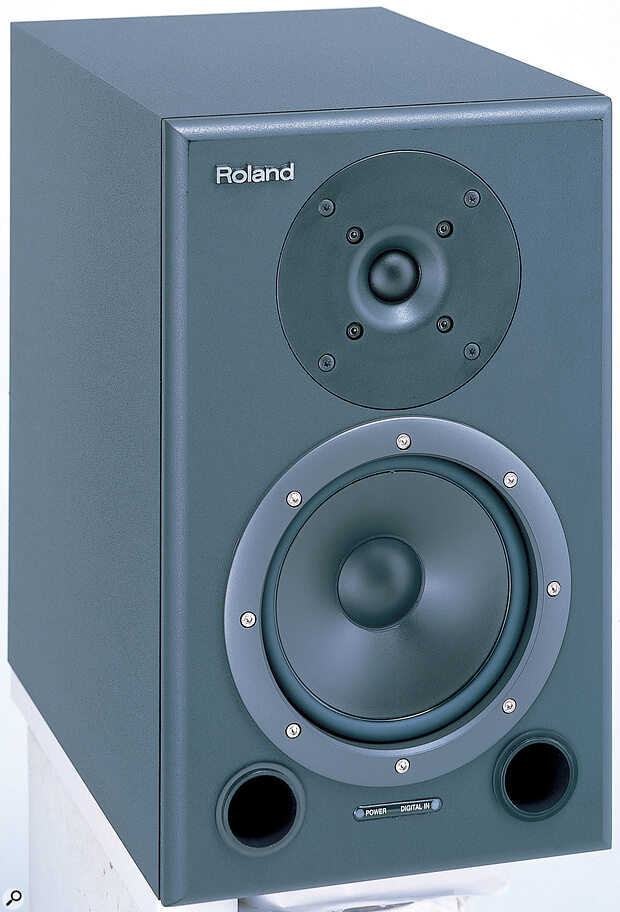 Roland's DS90 'reference monitor loudspeakers' have recently benefitted from an upgrade, the new version being christened the DS90A. Like its forebear, the new speaker is specifically intended to complement all those Roland V‑series digital recorders and mixers which incorporate virtual speaker modelling facilities, although it may also be used as a monitor in its own right, of course.

The new DS90A is virtually identical to the older model, retaining the same Pioneer drive units in a simple bass‑reflex design. The only obvious change is that the new version is 50mm deeper, measuring 372 x 229 x 381mm (hwd) — increasing the internal volume by around 12 percent to just under 32 litres. However, the frequency response is almost the same as that of the previous model, with ‑3dB points at 48Hz and 20kHz, although there is greater LF headroom.

Above the 2.6kHz crossover frequency the response appears to be commendably flat apart from a 2dB lift between 10 and 15kHz. The mid‑band exhibits a more irregular response but remains within the ±3dB specification limits. A gentle octave‑wide suck‑out between 250 and 500Hz is followed by a similarly sized peak centred around 900Hz and another 3dB suckout preceeding the crossover point. These anomalies create a character through the mid‑band which tends to flatter.

The DS90A accepts both analogue and digital inputs, and its built‑in 24‑bit D‑A converter is capable of synchronising to sample rates between 25 and 55kHz. The rear of the DS90A is identical to its antecedent, with a combi‑jack socket allowing both balanced and unbalanced analogue input. A small slide switch selects the analogue or digital input and, in the case of the latter, a further switch engages the co‑axial or optical S/PDIF interface.

These loudspeakers are unusual in that each cabinet contains its own stereo D‑A converter. Most digital input speakers — the little Genelec 2029As, for example — have a stereo D‑A in one speaker and transfer one channel of the decoded analogue signal across to the second. The DS90A features a co‑axial S/PDIF loop‑through socket to forward the entire digital input signal across to the second speaker — a slide switch on the rear panel chooses whether the left or right channel, or a mono sum, is passed to the amplifiers.

Three rotary controls on the rear panel set the volume and LF and HF shelf equalisation — the last providing a ±3dB swing from 60Hz and 10kHz, respectively. The bass‑mid signal is amplified by its own 60W power amplifier while the treble is amplified by a separate 30W unit.

As with the original, the DS90A is easy to interface with a wide variety of equipment and delivers loud, punchy music. Its extended bass headroom is welcome but the flattering tonal character and slightly veiled midrange makes the DS90A more appropriate for general‑purpose recording than true reference monitoring. Having said that, many potential users will undoubtedly appreciate the advantages of using this speaker in a monitoring role with the virtual modelling facilities of many of the V‑series recorders and mixers.

I auditioned the DS90As in conjunction with a VS1680 hard disk recorder/mixer containing a VS8F2 Effects DSP card which provided the DSP power necessary to model a range of familiar loudspeakers.

For anyone not conversant with Roland's speaker modelling, there are currently 12 algorithms starting with a program which claims to linearise and enhance the frequency response of the DS90A. Six algorithms, model some of the most popular active 'reference' monitors including speakers from Genelec, Event, and Mackie. A collection of 'grot‑boxes' replicate NS10s (with and without the tissue paper), Auratones, a generic tranny radio, typical TV speaker and various 'ghetto‑blasters'. The system also provides polarity reversal, bass‑cut filtering and powerful LF and HF equalisation facilities.

The DS90A's greater low‑frequency headroom, allows higher monitoring levels when using speaker models with an extended bass response. Whilst this improvement is welcome, the speaker's real strength remains is its compatibility with the speaker modelling of the V‑series digital consoles. The process of modelling loudspeakers can never be entirely faithful to the originals as there is currently no way of emulating the different polar responses of the monitors being modelled and their subsequent interaction with reflective room boundaries. However, when used in the nearfield, and in a reasonably neutral acoustic environment, Roland's approach provides a useful ball‑park approximation of how a mix will translate to different loudspeaker systems.

The update brings with it a relatively small price increase and the speakers are also now available singly instead of in pairs, making it easier to acquire surround systems. However, the stereo D‑A built into every speaker and the compatibility with Roland's virtual modelling make the pricing more attractive.