Cajons can provide a practical and compact alternative to drum kits — but they usually offer a limited range of sounds. Until now...

With most UK gigs now being in smaller pubs and bars, more people are switching to playing the cajon as an alternative to a loud and bulky drum kit. The trio in which I play use a cajon, and I have to say it works really well, though I’ve often wished that the sound palette was a bit more varied. I have dropped the hint to a few companies that an electronic cajon, with a built-in amp and a few sampled sounds, might be commercially viable, but for three years nothing showed up... 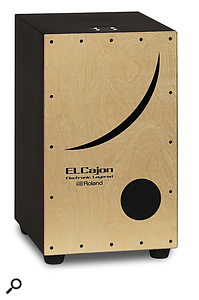 Then Roland announced the EC-10, or ‘El Cajon’, with an in-built amplifier that can be powered from the included mains adaptor or six AA-size batteries (offering up to 12 hours play time), making it a busker’s dream. I suspect that the amplifier technology is similar to that used in the battery-powered Cube amplifier series, so I’d estimate the power output at between 5 and 10 Watts peak, given the battery life.

Measuring the same as a typical acoustic cajon (50 x 30 x 30cm), the El Cajon EC-10 is constructed much like an acoustic cajon, and can be played using existing cajon techniques without the electronics being switched on. It has the laminated-wood playing surface and in-built snare of a typical cajon, but it also contains a compact amplifier feeding a dual-concentric speaker located behind the sound hole, plus an electronic sound engine based on sampled sounds. An inset carry handle at the rear makes it an easy one-hand lift.

There are three banks, each of 10 sounds, where each kit comprises two sounds (some with velocity switching), one to be triggered by hitting the top edge of the playing surface and one to be triggered by hitting the centre. The sensitivity can be varied to suit the user (though this returns to the default of maximum sensitivity on power off) so that you could easily set up a velocity-controlled performance, where only the cajon sounds at lower playing intensity and the electronic sounds join in when you hit harder.

Though the onboard sounds are arranged into banks nominally entitled Cajon, Percussion and SFX, these descriptions are fairly loose, as the Cajon section has real kicks and snares added to some of the sounds, while SFX is more about ethnic percussion sounds and a couple of EDM-inspired patches than UFOs and rainforests. Percussion adds things like tambourine, darbuka and timbale to the mix. However, all these sounds work really well in the context of cajon playing, and seem to blend well with the acoustic cajon sound.

Control is relatively simple: a top-mounted panel includes a pair of buttons for stepping through the three sound categories and another pair for selecting kits from within the current bank. A single numeric display shows you where you are within the current bank. Holding down specific pairs of buttons gives instant access to the sensitivity setting, or to a mute for the electronic sounds. There’s also a recessed rear panel with a volume control, a trigger balance knob (to adjust the balance between the head and edge sounds), a line out jack to feed a PA system, and a mini-jack input for your backing tracks or for a mobile music source. Battery access is also via the rear panel. 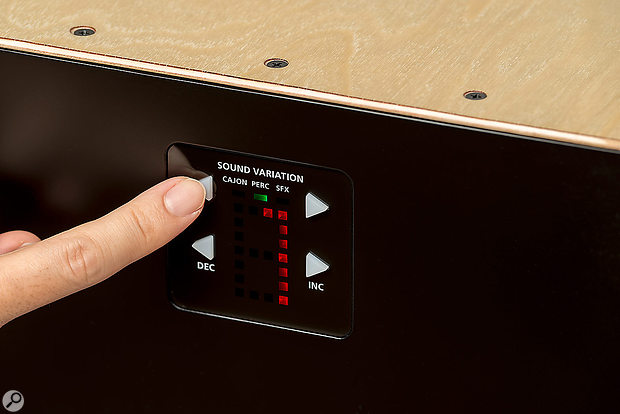 Putting on my Mr Picky hat first, I feel that the designers may have missed a trick in not including a storage compartment for the external power supply. A kick pedal input addressing its own selection of kick sounds would have made the instrument even more flexible, and I would also have liked to be able to load in my own samples. I also thought there might be a way to provide two different edge sounds by having sensors at opposite sides of the playing surface.

Note, too, that there’s no amplification for the acoustic cajon sound, so if you want that to be louder you’ll need to use a mic (which will also pick up the electronic sounds) or select the sampled cajon kit sounds. I’m glad to say that the internal sounds don’t cut out when the line output is being used, though it would have been useful to have that as a switchable option so that you could mic only the acoustic cajon sounds and DI the electronic sounds at the same time. I’m sure that a pre/post pull switch on the volume pot could have provided this option for little extra cost. As it is, if you turn down the volume or use the mute buttons, the line-out feed is also killed.

Despite my minor criticisms, Roland’s El Cajon EC-10 is undoubtedly a very attractive instrument with a good range of sonic options, and it is simplicity itself to use. The selection of high-quality built-in sounds covers a variety of styles, and though the amp isn’t hugely powerful, it sounds clean and punchy, even when flat-out, and is more than capable of overtaking the acoustic cajon sound in volume. A mic in front of the speaker port will capture both the electronic and acoustic-sounds and so is probably a good live performance option, though you’d need to be careful with the mic placement as the speaker port is at the front, albeit fairly low down. Note that the edge sensor also seems to be located very close to the top edge of the playing surface, so you have to hit right at the top to produce the edge sound.

Thankfully the designers have avoided sounds that make El Cajon sound like a cheap drum machine; it really does sound like an enhanced cajon, which works a treat, whether playing a conventional drum part or ethnic-style percussion. I like the way many of the sounds change as you hit harder, and the acoustic cajon sound stood up pretty well too. Though the El Cajon EC-10 will set you back around twice the price of a half-decent acoustic cajon, I think it fills a real need, and I’ll certainly be encouraging the percussionist in my band to try one.

There are many drum-pad products that can be played by hand, ranging from the Korg Wavedrum to the Alesis SamplePad 4 and various Roland drum-pad instruments, but this is the first I’ve tried that combines them with an acoustic cajon and mains or battery-powered amplification.

For the cajon player who needs a wider range of sounds with no added complication, the the El Cajon EC-10 is a no-brainer.