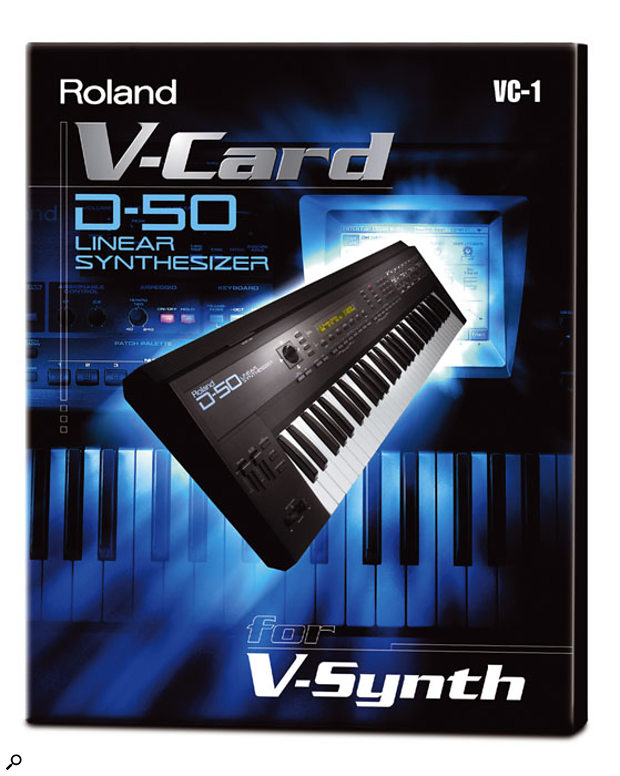 Roland's innovative V-Synth can now be reprogrammed with a RAM card, effectively turning it into another instrument. The VC1 card turns the clock back to 1987, perfectly recreating the S&S tones of the Roland D50.

Launched in 1987, the D50 was Roland's answer to a growing perception that analogue was dull and a thing of the past, whilst FM programming, the bright new concept that had dominated synthesis throughout the mid-'80s, could leave permanent furrows in the brow. Although Roland chose the acronym LA (Linear Arithmetic) to describe its synthesis, the D50 embodied what we now refer to as sample and synthesis, or 'S&S', its distinctive short samples (breathy chiffs, percussive plinks and so on) supplementing synthesizer waveforms. This lent the D50 a realism that's easy to overlook in these days of massive samples.

Paul Ward's D50 retrospective in July 1997's SOS, offers an evaluation of this ground-breaking synthesizer, so for our purposes it's sufficient to note that a D50 patch consists of two tones known as Upper and Lower. Each tone in turn comprises one or two sound sources (or 'partials' as Roland refer to them) which can either be PCM or 'analogue' waveforms. With enough programming depth to keep the tweakers happy and an effects section supplying a glossy finish, the D50 deservedly did well — at least until the Korg M1 came along the following year...!

Fast forward to 2003, when Roland launched a very different flagship, the V-Synth. My first encounter with it came at a trade show and by May, when the Sound On Sound review was published (see www.soundonsound.com/sos/may03/articles/rolandvsynth.asp), I had fallen under its spell. The V-Synth bundles together virtual analogue oscillators, user sampling and COSM processors; it also renders PCM waveforms malleable in ways they usually aren't, by cunning use of Variphrase processing. Add to this a superior user interface and a set of expressive performance controls, and you can see why I was hooked.

Naturally, when I heard of a means to transform the V-Synth into a D50 without any kind of invasive surgery, I was intrigued. I also wondered whether the transformation would be of novelty value only, or whether 'digital retro' might truly have something to offer.

I don't have a VariOS module, but according to Roland's documentation, everything stated in this review with regard to using the VC1 with the V-Synth also applies to VariOS, with the obvious exception of the things I've said about the V-Synth's physical controls (because the rackmount VariOS doesn't have these). Slot in the VC1, boot VariOS and you have a D50 in a rack.

Helpfully, the VC1 manual contains separate sections describing the operation from the perspective of both VariOS and the V-Synth, because the respective user interfaces differ so much. Judging by the VariOS section in the manual, I would recommend using the software editor, which would make everything far easier to operate!

The PC Card slot at the rear of the V-Synth (and at the front of the VariOS module) is a valuable means of storing data, exchanging files and so on. With appropriate software present, it is also the means by which the V-Synth can boot with an entirely different personality. This was already a familiar concept on the VariOS, but it is rather unusual for a flagship synthesizer to be capable of such a drastic 'brain swap'.

The first of the mooted 'alternative identities' to be available for the V-Synth is provided in the form of the VC1 or 'V-Card' (a VC2 Vocal modelling card was announced at this year's Winter NAMM, but was yet to be released when this was written). The VC1 card looks similar to a laptop PCMCIA adaptor, and you insert it into the V-Synth's card slot. Installation is now complete — you simply power on and the V-Synth boots as a D50. 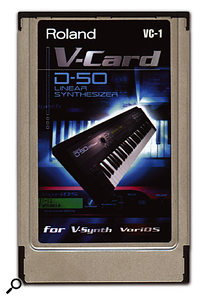 The VC1 card itself looks similar to a laptop PCMCIA adaptor.

In order to achieve this, Roland engineers apparently descended into the vaults to retrieve the original D50 code, which was stored on 5.25-inch disks. Running this code on the V-Synth produced a much cleaner sound than the original D50, because the D-A converters of the V-Synth are better than those of the D50 (not surprising when you consider how technology has marched on since 1987). To get around this, the card offers a 'D50 mode' for those that want it, which restores some of the grunge and aliasing of the original. A system menu offers the choice of the much-improved version or something closer to the sound owners of the original are familiar with. However, even in D50 mode, the V-Synth's emulation sounds better to my ears, and the reverbs are more acceptably quiet too.

Once you are up and running, you navigate using the V-Synth's touchscreen, make edits with the knobs and have a fair degree of flexibility with respect to assigning the V-Synth's performance controls. However, since this is not a rewrite of the D50's OS — it is the D50's OS — the limitations of that instrument still apply, and you can't create assignments that exceed its original capabilities. Nor can you apply V-Synth capabilities to the VC1's D50 — the V-Synth is either a V-Synth without the VC1 card in the slot, or a D50 with the VC1 installed, but never a mixture of the two.

The V-Synth's Time Trip Pad is an intuitive replacement for the D50's joystick and can be used to vary the levels of partials or the balance between Upper and Lower tones. Similarly, you can assign the D-Beam to take on the duties of the mod wheel, aftertouch or pitch-bender, or to act as a volume control or even a hold pedal.

The D50 was not blessed with knobs — you had to purchase the PG1000 programmer separately for that kind of real-time control. Even with the programmer, editing wasn't exactly a joy because you had to constantly retrigger notes in order to hear the changes made by the sliders. With the V-Synth's onboard knobs, you can tweak happily with no such restriction. You select a partial or partials for editing by means of the touchscreen or via the V-Synth's Structure buttons, and from then on it's simply a matter of turning knobs. Although these don't map exactly to D50 functions, they are mapped out logically enough and, in conjunction with the screen (because there are far more parameters than V-Synth knobs), editing is way easier than it ever was on the original. Most of the controls can even be remapped. If you select the small controller icon in the bottom left-hand corner of the main Play screen, you can then navigate around the V-Synth panel, plucking any parameters you like from the huge selection available. Provided you ignore the physical labels on the V-Synth, you can quickly memorise your way around.

The V-Synth has an arpeggiator, but the D50 did not, so nor does the VC1-based version, as you would expect. The V-Synth's Arpeggiator button is therefore used to activate the D50 Chase function, which is like a built-in MIDI-based delay; the V-Synth's Hold button sets portamento on or off and the Arpeggio Speed knob sets the Portamento or Chase (delay) rate.

The VC1 is supplied with all of the D50's original presets, plus the sound libraries for the D50/D550. In addition, 64 new patches are supplied using 28 extra waveforms that were too large to fit into the original synth (these include a passable mellotron string sample, and several electric pianos). There are an impressive 384 presets — but that isn't the end of the story. It's worth repeating that the VC1 is functionally identical to the real thing, meaning you have complete SysEx compatibility with any existing D50 patches. Therefore it's helpful that the card has a RAM area into which you can place up to eight banks of your own D50 sounds — that's another 512 patches on tap! If you don't have enough original creations to populate these banks, a quick Google search on the phrase 'free D50 patches' should yield enough to keep you happily occupied for weeks.

Was the D50 the world's first virtual analogue? I occasionally hear people mistakenly suggest that it had true analogue oscillators and filters when, in fact, it was an entirely digital machine. This is a testament to Roland's programmers, who emulated analogue oscillators and filters with uncanny skills. Ironically, in 1987, the synth world was looking to distance itself from analogue; it was another eight years before the circle was complete and the Clavia Nord Lead appeared on the scene.

The supplied CD-ROM contains a Uniquest editor for both the V-Synth and VariOS. It's compatible with a variety of operating systems, from Windows 98 through to XP and also Mac OS X or OS 9, and is an excellent means of editing patches or managing user banks. As well as graphical editing of parameters, options such as randomise, blend, mix and morph ensure you should never get bored when seeking new patch ideas. I was surprised to be able to throw up plenty that sounded genuinely different using these morphing techniques. I also generated several that were silent or constantly droning, but as you can produce whole banks with indecent haste, this isn't exactly an issue!

Logically, since there is only one card slot in the V-Synth, the VC1 has to be a RAM card in order to store user patches and be fully self-contained. But this also means that you might inadvertently delete some of the files needed for the VC1 to operate. For this reason, Roland include on the supplied CD-ROM a copy of the all-important program files and details on how to restore the card, should that ever be necessary.

Unlike synthesizers that use modelling technology, the VC1 is an absolutely faithful reproduction of an earlier digital instrument. This means that the V-Synth can import D50 banks, can exchange patches with a D50, and yet sounds cleaner and better than the original. If you turn off its 'D50 mode', you have an even more polished sound — the V-Synth's signal path conveys the D50's personality much better than the original hardware. I'm no purist, though, and personally, I would have been happy if the VC1 had offered you a D50 with the full V-Synth stock of effects and an arpeggiator. And although the Upper and Lower tones can be split, layered or played from separate MIDI channels, the D50 remains a bi-timbral instrument, whereas I'd have loved access to more modern levels of multitimbrality. But as this is not an emulation, you are given exactly the D50's capabilities and sounds, and nothing more (other than an extra 28 waveforms).

I don't think for a moment that I'd want a D50 to permanently replace my V-Synth, but of course that's not the idea — when you want your V-Synth back again, you simply remove the card and reboot as normal to restore the V-Synth's functions. However, I really enjoyed my refresher course in LA synthesis — there's still plenty of mileage left in it, especially when you delve into the supplied editor. If that isn't enough to convince you, it's worth remembering that strings, brass, and organs were not really the focus of the original V-Synth factory set, and given the abundance of free D50 patches on the Internet, the VC1 is a great way of adding more conventional sounds to the Roland V-Synth.

If you have a V-Synth (or a VariOS module), the VC1 card allows you to transform it into a D50 for about half of the second-hand price of the real thing. With an impressive storage capacity and a useful supplied editor, this small card offers a fun diversion for V-Synth owners who can now carry two classic Roland keyboards in one flightcase.