No control room is acoustically perfect, but the right correction system can help to deliver more accurate monitoring.

If our Studio SOS visits have taught us but one thing, it’s that the commonest problem with home studios is, by far, poor acoustics. In some ways this is inevitable: domestic rooms, with their parallel walls, floors and ceilings, are seldom designed to sound amazing; nor are they usually that big. High–frequency issues can be mitigated relatively easily, by sticking foam about the place (as we often do) to minimise early reflections, but the low end is a trickier cat to skin. Small rooms are inherently troublesome, because their dimensions are often smaller than the wavelengths of sound that we sun–deprived sound technicians are interested in.

Without going into too much detail (of which more can be found on our web site, and yet more still in the outstanding book Acoustics & The Performance Of Music, which I heartily recommend to anyone with an interest in acoustics and/or an insomnia problem), imagine a pair of monitors. They’re decent speakers, and they have a frequency response of, say, 40Hz to 20kHz. That response will have been measured in an anechoic chamber — a large and eerie–looking echo–free room that could easily be mistaken for one of the later levels in Quake II — by sticking a microphone in front of it and measuring what it outputs at different frequencies. The results come back and, hey presto, a pleasing straight line is the result. Hurrah! They’re perfect! 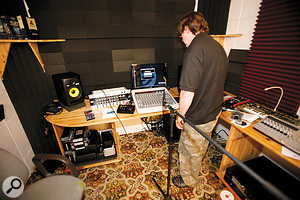 Paul White in his natural habitat, using the KRK Ergo room–correction system.Except that when someone gets these same monitors, sets them up in their spare bedroom, and then tries to repeat the test, the results look like a relief map of Mordor. The room, like the One Ring, has corrupted the good in the monitors and turned them to evil.

Is it possible, though, to ‘undo’ this corruption? To cast the bane of bad acoustics into to the fires of Mount Doom? Well, in a word, kinda.

There are now quite a few DSP–based systems that seek to reverse the effects that a room has on monitoring, and they all tend to work in the same way: you put an omnidirectional microphone roughly where your head usually is, blast some test tones out of the monitors and record the result. You then EQ the recorded noise until its frequencies are back in balance, and when you apply that EQ curve to the output from your monitors, everything comes out sounding hunky dory. Examples of such systems include KRK’s Ergo and IK Multimedia’s ARC 2, both of which come with their own measurement mic and calibration software. The KRK system also includes an audio interface/monitor controller, while the latter uses software for monitor control, but they are otherwise very similar. You can read our reviews of them at http://sosm.ag/mar09-krk-ergo and http://sosm.ag/oct13-arc2. 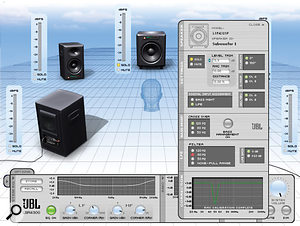 The control software for JBL’s room–correcting LSR–series monitors.Many of you already have your own suitable mics, interfaces and whatnot, however, in which case there are some software–only alternatives that can help you perform the same task. Indeed, the Sonarworks Reference software that we’ve reviewed this month (albeit in the context of headphone rather than monitor correction) can fill precisely that role. It’s also available in various bundles, some of which include a calibrated measurement microphone.

Many monitors nowadays use digital processing to manage various functions like crossover filtering, limiting, driver time–alignment and so on, and a surprising number have taken this to the next logical step, by extending this DSP functionality to include room correction. Perhaps unsurprisingly, one of the first companies to do this was JBL, with their LSR4328P speakers (http://sosm.ag/apr06-jbl), which use the HiQnet protocol to link speakers together, allowing the correction system to work with multi–speaker (surround) setups. 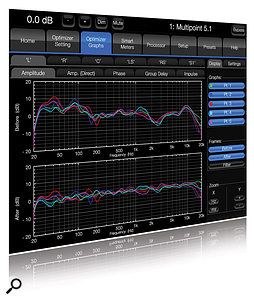 Trinnov’s Optimizer system is impressive — but expensive.Genelec are another name in the room–correcting monitor game (such as it is), and the 8320 and 8330 APM kits reviewed in this very issue come with mics and interfaces, and an intuitive piece of calibration software. Also noteworthy is the coaxial–driver Equator Audio Q8, which we reviewed back in 2009: http://sosm.ag/oct09-equator-q8.

Options for the more affluent monitor perfectionist are fewer. At the very top of the room–correction food–chain (if such a thing can be said to exist) is the Trinnov Optimizer. Unlike those hitherto mentioned, the Optimizer not only corrects problems in the frequency domain, but in the time domain, too. The system can distinguish between the sound coming directly from the monitors and that which is reflected off the walls, and can correct phenomena such as early reflections, modal ringing and even speaker resonance. Impressive stuff, but then at its price it ought to be! 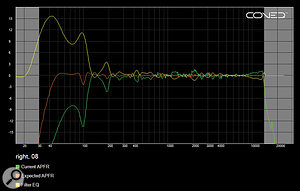 The RSL CONEQ system at work.A perhaps more realistic (though still sternly priced) option is the Real Sound Lab CONEQ (http://sosm.ag/feb13-coneq). This works in a similar way to the others — a microphone is used to measure your monitors’ response, and DSP trickery is used to correct for it — but it is actually intended to make up for the shortcomings in the speakers themselves, rather than a given room’s response to them.

One Does Not Simply...

While the CONEQ will perform some room correction of the type described here, Real Sound Lab recommend that the best way to correct for a room’s acoustics is to treat it... acoustically! And that’s a point worth making, because no matter how sophisticated it is, this kind of digital trickery will never truly replace acoustic treatment. You see, taking a measurement and adjusting for the outcome will only ever give you a correct response in the place where the measurement was taken. Because of the complex way in which speakers and rooms interact, it’s entirely feasible that your carefully flattened response at the listening position causes the frequency response at other locations in the room to become significantly worse!

To their credit, all of the systems mentioned here require, or at least have the ability to allow, the user to take measurements in multiple places, in order to mitigate this effect, but no such system can perfect the sound everywhere. At best you might get a few bass–heavy or bass–light ‘zones’ in your room; at worst you might lose all your low–end response just by moving your head a few inches one way or another!

So, as ever with ‘magic bullets’, they’re not perfect. Used in conjunction with proper acoustic treatment, however, then can certainly help to wring the last few drops of performance out of your monitoring system.