There was a time when most recording engineers wanted nothing better than to do away with the hiss, distortion, and wow-and-flutter that affected analogue tape recordings. However, now that clinical digital recording is the norm, the imperfections of analogue have become desirable qualities.

Vinyl & Tape Melodic Shots is an attempt to satisfy the desire for an analogue sound, but rather than take samples from old tapes and records (which would be problematic from a copyright point of view), Sample Magic have plundered their back catalogue and bounced everything they selected from it onto tape and vinyl!

In all there are over 1750 samples, formatted for Kontakt, EXS24, Reason and Ableton samplers, and also included as plain old WAVs.

In terms of sounds, the collection is very dance orientated. Applicable genres include chillout, deep house, disco, garage, house and techno. As the title suggests, the content is melodically based, meaning that there are no drums. A previous release, called Vinyl & Tape Drum Hits, covered the drum side of things and was produced using similar processes.

To provide their customers with sonic options, Sample Magic have treated the same samples in four different ways and then saved the output of each process in its own folder. In the Vinyl folder, for example, the sounds were finalised through a Phoenix Thermionic valve compressor before being cut on a Neumann VMS70 Lathe. 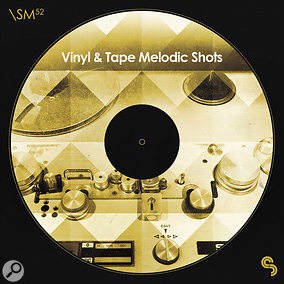 The A80 processed samples were recorded to quarter-inch Quantegy GP9 tape at a moderate level, while the Hot A80 Tape versions were driven harder still. Then, in case that didn’t result in enough compression, the raw samples were driven further into the realms of distortion using an A810 tape machine.

Because the source samples processed by each method were the same, all four folders contain identical sub-folders, titled Bass, FX, Keys, Pads and Synth and Vocoder. Of these, only Bass and Synth have their own set of sub-folders, but overall it feels like there are too many folders to be dealing with, and it’s easy to lose track of where you are when auditioning the content.

There’s no doubt that the samples have the warmth and pleasant distortion that one would hope to get from an analogue recording, but it’s difficult to say how far the processing has affected them without hearing what they were like raw. That said, A/B comparisons between the tape and vinyl folders revealed significant differences.

One thing worth pointing out, though, is that the samples often sound too good to have been ripped from an old record, so to create that illusion they may well require a little degrading, and some crackle and noise will have to be added to the tape versions.

Sample Magic have gone to a lot of trouble to give this collection a rich and satisfying sound and I’m sure producers using it will find their mixes are all the better as a result. Tom Flint