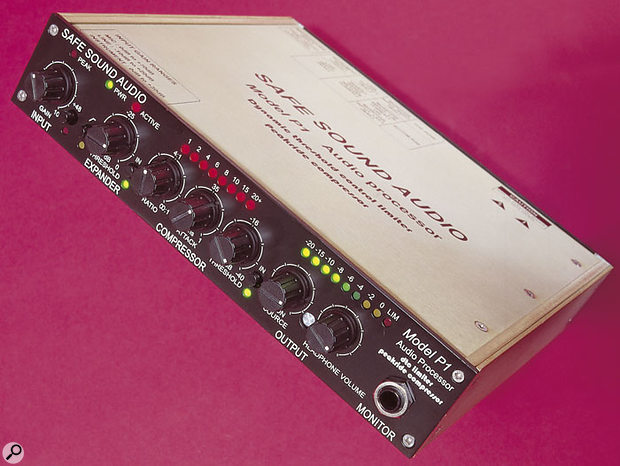 This deceptively simple recording channel incorporates some very clever circuit design to overcome many of the potential limitations of this type of unit.

The half-rack Safe Sound P1 Audio Processor is a single-channel 'recording strip' comprising a compressor, an output limiter and an expander, plus a choice of balanced line or mic inputs, with the mic input having switchable phantom power. It also includes a headphone output and a monitor input for cue monitoring without a mixer. Although it looks simple and basic, the unit is the product of some very serious design work, demonstrated by the choice of a highly regulated mains power supply rather than a wall wart, and the use of a Burr Brown INA217 low-noise, low-distortion amplifier chip in the mic amp circuit.

Overall the frequency response extends from 15Hz to 55kHz (-0.5dB), but there's a low-frequency roll-off switch to prevent unwanted ultra-low frequencies from compromising performance. The gain control element is a THAT4301 VCA chip and the side-chain circuit actually uses an elaborate combination of three attack/release circuits with fast, medium and slow time constants. This Peak Ride system allows short vocal transients to be controlled effectively without over-suppressed initial transients, while the release circuit responds to the envelope characteristics of the programme material, making setting up easier. The effects of the audio level being modulated (so-called ripple distortion) are claimed to be largely eliminated by this circuit. 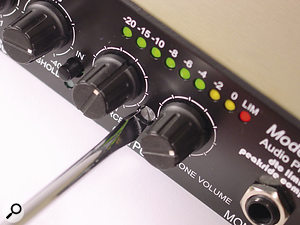 The output level is set by using a screwdriver to adjust a small front-panel trimmer.Photo: Mark EwingThe limiter also includes some clever ideas to prevent overshoot and audible side-effects, so instead of trying to clamp the signal once it hits 0dB (which is impossible to do instantaneously without lookahead), the circuit looks to see when the signal passes the -6dB point and it also looks at its rate of increase in level so that it can predict whether an ensuing clip is likely. Furthermore if the attack rate of the audio is particularly high, the limiting threshold is dropped by 3dB in order to head off the overshoot. This strategy, combined with a 40ms limiter attack time and a soft clipper to deal with brief peaks, is designed to head off pretty much any overshoot, while at the same time reducing the audible effect of fast limiting. In fact the compressor can be made to overshoot slightly if seriously abused, but curing this would probably have compromised its transparency of sound.

Even the expander incorporates unorthodox ideas to prevent ripple being imposed on the signal. When the expander is allowing sound through above its threshold setting, the circuit limits the side-chain control signal before feeding it to the VCA, so that there's no unwanted modulation superimposed upon the audio. There are also separate release and hold side-chain circuits to maintain natural dynamics without the user having to juggle with control settings. The expander ratio is a very assertive 3:1, while the maximum attenuation is held at 20dB.

The P1 has mic, line and instrument inputs, everything being on jacks other than the XLR mic input. As you'd expect, the instrument input is high impedance and unbalanced, and in this instance uses FET circuitry with a 1MΩ input impedance. Two further monitor inputs are provided so that a stereo signal can be fed through to the unit's headphone output and mixed with the main output, where the user needs to set up zero-latency monitoring for recording into a computer. A balanced jack accommodates the main output, while the monitor output is a regular quarter-inch stereo phone jack and is located on the front panel. An additional rear-panel TRS jack provides an unbalanced insert point.

Because of its ingenious circuit design, the unit has relatively few controls. The input stage has gain, phantom power for the mic input and a low-cut switch, but no source-selection controls. Instead the sockets use a priority system such that either jack input overrides the XLR, and the balanced jack overrides the instrument input. Up to 70dB of mic gain is available.

A single threshold control is used to control the expander, which may be switched in or out of circuit, and all the buttons have status LEDs. Additionally, the input stage has a Peak clip LED and the expander has an Active LED to show when it is operating (applying gain reduction). Because the compressor features a programme-dependent release circuit, it requires only Ratio, Attack and Threshold controls, with the amount of gain reduction shown on an eight-LED meter. The limiter has no controls, as it is always active, and comes before a screwdriver-adjustable output gain control that can be used to calibrate the maximum output to suit the input sensitivity of the device it is feeding. That leaves a Monitor Source level control for the stereo monitor input and an overall Headphone Volume control. A further eight-segment meter monitors the output level and this has a Limit LED to its immediate right.

During testing, the P1 Audio Processor lived up to its technical claims by being almost impossible to make sound bad! It's input stages are very clean and free of added colour, while the compressor evens out the levels in a very musical way without robbing the sound of life or noticeably hardening the attack sound of the audio being processed, even when compressing hard. When you set a longer attack time to allow the leading edge to sneak through, you don't suffer the harsh attack that some compressors seem to impart. There's something quite flattering about this compressor circuit, but it's far too clever to be too obvious! It sounds good in the same effortless way a nice tube mic does. It's also great on clean guitar and bass. 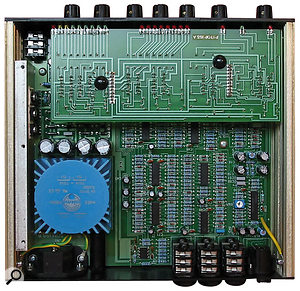 The overall build of the P1 is extremely solid and includes a high-quality internal mains transformer, which means that there's no wall wart to wrestle with.Photo: Mark EwingI was impressed by the smoothness of the expander circuit, which you may remember has only a single control. It responded naturally to both guitar and voice, the release time seeming to 'mould' itself to the audio. The attack is around 3ms, which is fast enough not to compromise transients, but not so fast as to cause clicks. Not allowing the attenuation to go further than 20dB is probably a good idea, as shutting down to complete silence only ever draws attention to any noise that can be heard beneath the programme material.

And as for the limiter, even when you deliberately run the audio into the end stops, it's difficult to hear the process working. If you really drive it hard, the output can overshoot very slightly on transients, but I think the decision to design for good sound rather than for absolute brick-wall limiting was the right one. Used anywhere close to sensibly, the limiter is effective and as transparent as any analogue limiter I've heard.

It's good to see designers going back to first principles in an attempt to find ways to improve upon existing paradigms, and the P1 has certainly benefited from this approach. Its sound quality, both technically and subjectively, is way beyond what you'd expect from its modest appearance, and every stage works extremely well — it's not just a good mic amp or a good compressor. Users who are less than confident about setting up compressors should have no trouble getting a good sound out of the P1, as the simplified control system is a doddle to use. It also has the benefit of an in-built headphone monitor amp and monitor inputs for use with high-latency computer systems or simply for providing a convenient means of headphone monitoring while recording.