These two-way active monitors provide an upfront sound suited to pop, rock or dance music, at an affordable price.

Good active monitors are traditionally expensive, but there are a few models on the market that offer a decent level of performance for a bargain UK price. Samson hope to compete in this market sector with the two-way Resolv 80A actives, which despite their low cost are impressively specified and visually stylish. Built into conventionally ported MDF cabinets and finished in black, scratch-resistant textured paint, the Resolv 80As each measure 16 x 11 x 13 inches and have a quoted frequency response of 58Hz-20kHz ±3dB. No maximum SPL figure is provided, but as paper specs are notoriously misleading in this area, I'm happy to evaluate this aspect of performance on a subjective 'loud enough or not?' basis. 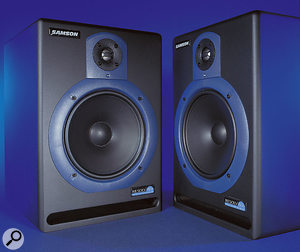 The bass/mid-range is covered by an eight-inch, magnetically shielded driver based on a copolymer cone in a butyl surround and driven by what looks like a two-inch voice coil. Managing the high end is a fluid-cooled titanium tweeter with a neodymium magnet and a phase plug fitted in front of the diaphragm to help control the dispersion. Non-slip rubber feet are included for use with the speakers and can be attached if necessary, while the inputs cater for both balanced XLR and jack connectors at a nominal +4dBu level as well as unbalanced phono inputs at the -10dBV consumer level.

Driving the speakers are two power amplifiers fed from an active crossover set at 2.3kHz. The bass/mid-range driver uses a 75W amplifier with a further 25W for the tweeter, and to help the user tailor the sound of the speakers to their taste there's a four-position Mid Presence control on the rear panel (one of the settings is flat). This has been included so that the user can decide how flat or aggressive they'd like their monitors to sound. However, there is no bass control, which could have been useful for compensating for positioning relative to reflective boundaries.

The speakers are finished very tidily, with rounded corners on all edges and moulded blue trim plates around the tweeter and woofer. An LED (blue, naturally!) inset into the tweeter surround shows when the monitors are switched on, and both drivers are held in place with cap-head screws. The rear panel is recessed flush with the cabinet's surface and houses the IEC mains inlet and power switch, the three types of input connector, the four-way Mid Presence knob and a level control with a centre detent. This panel is also used to mount the internal electronics so it doubles as a heat sink. Graphs of the frequency response curve, crossover response, Mid Presence curves and a 'waterfall' time/frequency/amplitude plot are printed on the rear panel, more to impress (I suspect) than to inform. 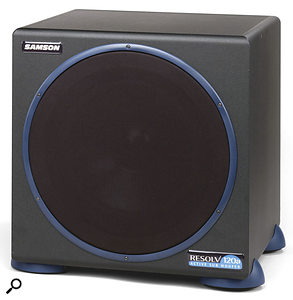 Photo: Mike CameronIf you find that the low-frequency response of the 80A is insufficient for your needs, then there is the option to extend the range of your speaker system with Samson's own dedicated active subwoofer, the Resolv 120A.

A reflex design, the 120A features a 25mm-long excursion driver with a butyl surround. The built-in 120W amplifier provides 94dBSPL per Watt at one metre, and has a frequency response of 30Hz-300Hz (±3dB). The subwoofer's cabinet also contains bass management facilities for stereo systems, so your mixer's or workstation's monitoring output is fed through the subwoofer to the satellite speakers. Controls on the rear panel allow adjustment of the subwoofer's phase and volume, although the latter control also affects the volume of the satellite speakers, and you can also manually adjust the crossover point between the subwoofer and the satellites over a range of 40-180Hz, using 12dB/octave Linkwitz Riley filters. Another useful feature is a mode which automatically powers the unit down if no signal is detected for ten minutes.

If you'd prefer to use the subwoofer with passive satellite speakers, then a flexible set of the I/O on the rear panel should be able to accommodate you, whatever the setup. By choosing the correct sockets, the subwoofer can be connected either between your monitoring outputs and the stereo amp inputs, or between the stereo amp outputs and the satellites themselves. You can also configure two 120As into a stereo system, should you wish. Mike Senior

First off, although the maximum SPL isn't quoted, the phrase 'loud enough' springs readily to mind! At typical nearfield monitoring distances, you'll probably throw in the towel before the speakers do. I preferred the sound with the 'tweak' control set to its flat position, though the forwardness that you get by adding Mid Presence boost is more subtle than I expected it to be and will probably appeal to Yamaha NS10 users. You can also dial in a slight dip for what Samson describe as more of a hi-fi sound. 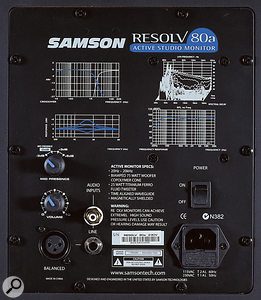 Photo: Mike CameronSound-wise, the 80As translate the balance and overall tonality of a piece of music well, and the bass end stays tight even at the very low end. In a typical project studio, you probably wouldn't want the bass to go much deeper unless you were lucky enough to have a large or acoustically treated room. In purely subjective terms, the sound is more 'in your face' than that from my Mackie HR824s and some of the 'air' around the acoustic sounds seems to be missing, almost as though the mics have been moved a little closer to their sources, but, on the other hand, this character makes it easy to separate sounds within a mix. There's a slight hardness or stiffness to the overall sound, but it's something you very soon get used to, and vocals come over smoothly and clearly. Furthermore, although the titanium tweeters have a slightly assertive character, they are not nearly so brash and harsh as some metal-domed tweeters I've heard and I didn't find them noticeably fatiguing to work with.

I checked a number of CDs over these monitors, as well as some tracks I've been working on, and found they worked best for pop and rock music where their almost enforced clarity can be a very positive attribute. They also have enough depth to give you a very good idea of what the kick drum and bass guitar are really up to. By contrast, I played back some solo violin recordings I made earlier in the week and found that my Mackie HR824s let me hear the resonance of the wood and the space in the room rather better than the Resolvs, while the overall sound of the HR824s just seemed more comfortable and effortless. However, given the significant UK price differential between the two models, this isn't supposed to be an indictment of the cheaper speaker, but simply a comparison.

The Resolv 80A is a splendidly affordable active monitor and, though I found its tonality a little unyielding when I first switched over from my Mackie HR824s, I quickly settled into the feel of them, and on balance they told me what I needed to know about my mixes. As observed earlier, they seem happier with pop, rock and dance music than with acoustic instruments, but even then I've no reason to believe that they'd lead you to making a bad mix decision — indeed, you may find the finished recording actually has more life and detail than you heard when you mixed it! Perversely, though, unwanted noises such as ticks and pops seem to be revealed perfectly adequately, so you don't have to worry that these speakers will hide too many problems from you.

Right at the start, I said that there were relatively few inexpensive active monitors that I felt worked well, so I suppose I should at least name the ones I've tried. There are of course the Behringer Truths, which are not hugely dissimilar in character or concept to the Resolv 80As, there are the Alesis Monitor 1 MkII actives and lately the Fostex PM1s. If you pay more you can of course get monitors that perform better in some or all areas, but I can see no reason why you shouldn't produce great-sounding mixes using the Resolv 80As.

Given its low cost, the Samson Resolv 80A performs well, especially on pop music, and delivers an acceptably accurate impression of tonal balance with enough bass extension for most project studio rooms.