I've been a big fan of EZ Drummer ever since it first appeared, not because it offers the most comprehensive library of sampled drum sounds around, but because it doesn't. EZ Drummer is a spin-off from the gloriously realistic-sounding DFH Supreme software drum instrument, but DFH Supreme takes up a lot of drive space and can be intimidating to use. EZ Drummer, on the other hand, offers a fantastically intuitive user interface, based around two main windows (the drum kit view and the mixer). Its sound library is essentially a single drum kit, but you have the ability to alter a few components, or change kick beaters. You also get a drag-and-drop library of MIDI drum grooves that are genuinely useful in a musical context. All the drums and cymbals are well recorded, generously multisampled and can be modified by using the mixer to change the amount of overhead mic level or room mic level, as well as having individually adjustable mics for the top and bottom of the snare drum. Getting a first-class studio drum sound is really simple — you simply call up EZ Drummer (as an AU or VST plug-in for either Mac or PC) and then start hitting keys. The mapping is able to operate in the General MIDI standard, even though you may find some extra sounds and articulations by stepping outside of it, and the whole installation takes up less than 1.5GB of drive space. The output can be stereo or multi-channel. 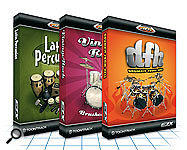 Now Toontrack have started releasing EZX expander drum kits that can be loaded into EZ Drummer, all with the same visual kit type of interface where you can click on the various components to audition the sounds. Each expansion kit takes up around 1GB of drive space or less, and when loaded into RAM, most are under 300MB.

The first of these that I tried was the Vintage Rock kit, a very basic Ludwig two-tom kit with Zildjian and Paiste cymbals, plus a choice of substituting a Slingerland Radio King snare for the Ludwig B/O Supraphonic, which itself comes with a choice of two tunings. The whole kit also has stick and brush options, but the real appeal of this kit is its authentic '60s sound, which is much warmer and less penetrating than anything normally used today. Think early Beatles and you won't be far off the mark. In the mixer section you can add overhead and room mics as normal, but there's also a compressed room fader that adds a truly huge, brash edge to the sound. Once you get used to the fact that this kit is supposed to sound old and dated, it really is a marvellous thing and, like the standard kit, it has more than enough velocity layers and long enough cymbal decays to make you believe the dynamics are real.

Next out of the box was Drumkit From Hell, a sound set that harks back to the early days of DFH, and which is based around a hybrid kit comprising Sonor toms, a choice of Ayotte, Ludwig or Pearl snare, and a choice of Sonor kick drums with various beaters, or a Ludwig kick with a felt beater. The kit may look as though it has two kick drums but they both seem to play the same sample set, and for some choices only the right-hand one operates. This monster of a kit has five toms and 11 cymbals (not counting the hi-hats) and has a wonderfully bright but punchy rock sound to it, with bags of dynamics. Once again, the mixer has that extra compressed room option for recreating those Phil Collins moments — though it's a pity they didn't include a gate as well, for the whole gated room effect. The choice of cymbals is fantastic, from tiny splashes to Chinese, and many of these allow you to choose from two or three options via the pull-down menu that appears when you click the arrow key at the bottom of a cymbal or drum head.

Finally, there's the Latin Percussion kit, which includes just about every Latin sound you could think of except perhaps a flextone. In the drum department there's the expected bongos, congas and timbales, as well as the square wooden cajon, and a clay udu drum with three different articulations. On the percussion tables are various shakers, caxixi, maracas, chimes, bells (sleigh and cow), wooden crickets, guiro, tambourine, triangle, vibraslap and wood blocks plus three cymbals, again with various cymbal model options. Where appropriate, these instruments have different applications mapped to different MIDI notes, and having used these products for a while, I think the only trick that has been missed is to display the relevant MIDI note when you trigger a sound via the mouse in the kit display window.

I'm not sure that the depth of multisampling is the same here as for the drum kits, but I could be wrong. In any event it is adequate to convey the feel of a real Latin percussion section and, as with all the expansion kits, you get a selection of appropriate MIDI rhythm loops to use in you own compositions. There's no compressed room this time, and no overheads, as we're not dealing with a conventional drum kit, but you can bring up the ambient room mics to add a nice sense of space. Note that the room mics also control the overall cymbal level, as these are not individually close-miked.

Overall, these expanders really add to the flexibility of EZ Drummer, without you having to pay for kits you'll never use. The audio quality is superb, other than a little vintage (tape?) noise that is occasionally audible under some of the Vintage Rock kit samples. If you need drums but don't have the space to record them, EZ Drummer is a great product, but these expander kits really widen its appeal and are ideal for both the programmer and the MIDI drum kit user. Paul White

The sample library world is one now occupied by a relatively small number of big players so, for a change, it is quite nice to see a sample product that is most certainly the output of a small-scale operation. Pendle Poucher is based in Brighton and, as well as deserving a pat on the back for his cottage-industry approach to sample libraries, he must also be one of relatively few musicians within the UK who owns a Dulcitone. Pendle claims that Dulcitone 1884 is the world's first multisampled Dulcitone and, knowing how rare the instrument is, I'm inclined not to argue with him. What is provided here is a single sampled instrument, built from some 70MB of stereo samples, and split over three velocity layers. It is available by download only and is offered in Kontakt 2, EXS24, Soundfont, Ableton Sampler and Reason NN-XT formats. 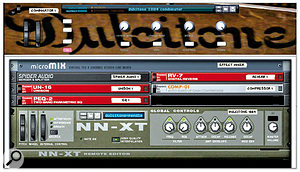 As the Dulcitone is likely to be a bit of a mystery to most SOS readers (myself included until I obtained this library to review), a little bit of history is in order. The Dulcitone is a keyboard-based instrument and, in tone, is not unlike the glockenspiel or celesta: the sound is very delicate but also very atmospheric. It was originally built in Scotland during the late 19th century as a portable keyboard, and many African missionaries transported them between local churches in lieu of pianos. The sound of the instrument is created by a series of tuning forks, and the keyboard triggers covered hammers that strike the forks. These forks had the advantage that, unlike strings in a piano, they did not go out of tune. As anyone who knows anything about the insides of a Rhodes piano will appreciate, there are some similarities in terms of the way the sound is created, and the Dulcitone has been described as a Rhodes without the electric bits.

I experimented with the NN-XT version of the instrument. The sampling itself seems to have been well done and the differences in tone at different velocities are nicely programmed: the sound becomes progressively brighter at higher velocities. There were one or two small areas of the keyboard where a minor amount of mechanical noise became apparent. This was, however, very slight and, in the context of most performances, would not be noticeable, so I suspect Pendle has done a pretty good job here of cleaning up the samples.

Dulcitone 1884 is a specialised product with a niche market, but at £15 it is hardly going to break anyone's piggy-bank too far open, and I could easily imagine this library finding a home with film or media composers. It is also nice to see an independent library producer — and someone who clearly has a passion for this unique instrument — taking the time and effort to preserve its heritage, even if it is in a digital format! John Walden

Big Fish Audio's Groove Planet is a pretty straightforward sample library. The bulk of this collection is a series of 22 loop-based construction kits, with most loops consisting of electric bass and acoustic drums. A small number of 'bonus' instruments are also included, based on the instruments used within the loops. In total, there are some 300 samples, broken down into various bass articulations, and two drum kits, all supplied in Reason NN-XT, Gigastudio and Kontakt formats, although the raw WAV files could obviously be used to build similar instruments in other sampler formats if required.

I tested the loops via Acid Pro 6. The construction kits come in a variety of keys and tempos ranging from 85 to 185 bpm. Within each kit, there are different numbers of bass and drum loops, but these are each labelled 'a', 'b', and so on, suggesting a pairing between a specific drum loop and associated bass loop. The smallest kits have four loops in total, while the largest has 16. Each kit also includes a pre-mixed WAV, so it is easy to audition the kit and hear what can be done. Sonically, the bass and drum sounds seem very consistent across the various kits. This is a distinct advantage here, as it makes it easier to mix and match loops across the kits for some extra variety.

Musically, the loops could work within a number of different contexts. While the playing is most definitely funky throughout, the sounds are pretty classic and would therefore also fit quite happily in a rock context or, in one or two cases, something with more of a dance influence. For example, the 'Bonzo' loops cross a John Bonham-style drum performance with a Chili Peppers bass line. In contrast, 'Wilderness' — while funky — has a beautiful mellow feel to it. The 'Pretty Ugly' kit would make a good 'Police meet Chili Peppers' crossover and, for a more obviously '70s vibe, 'Harsky and Stutch' pushes all the right buttons.

With only 22 construction kits — and in some of these, only four loops — some might suggest that Groove Planet was a little skinny on content. This would, however, be a little unfair on two counts. First, the asking price is modest and is not going to hit any potential purchasers too hard. Second, and more importantly, the quality of the content is excellent. The recordings are very good, but it is the performances that really make these loops stand out. And in concentrating upon just bass and drum loops, Big Fish Audio have given funk-rock producers some excellent backbones around which to construct a full piece. If you would like a small-but-beautifully-formed slice of funk-rock rhythm section, Groove Planet is well worth checking out. Now, excuse me, I'm off to make some funky music... John Walden