We lend an ear to a pair of monitors from a US company just starting out in the British studio market.

SLS are an American company probably best known for their professional PA and cinema loudspeaker systems, which they have been developing since the early 1970s. Their involvement in the studio market has generally had a fairly low profile in the UK, until recently, but the studio monitor range is interesting and well worth a closer look. 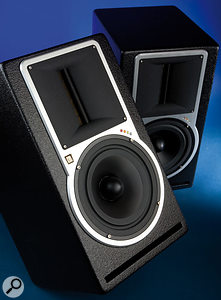 The PS8R model reviewed here is an active, two-way, mid-field design. It has a passive sibling called the S8R, which shares essentially the same drivers and cabinet, and there are various larger far-field models in the range too.

One of the key strengths of the current SLS designs is the use of bespoke (and patent pending) ribbon drivers for the treble output. These ribbon tweeters have been optimised for reliability and high power — for the PA market — while still delivering a very clean, accurate and fast transient response. Part of the efficiency and accuracy is down to the use of a symmetrical push-pull motor assembly using powerful neodymium magnets.

The technology scales down nicely for more modest studio monitors. The PRD500 five-inch ribbon tweeter used in the PS8R monitor speaker employs a Kapton diaphragm with an etched-on aluminium conductor. Kapton is a composite material that can withstand the extremely high temperatures generated by large currents flowing through the aluminium conductors, but is also very lightweight. The heat generated when the diaphragm is working is cleverly wicked away by a fine wire mesh, layered on the surface. Apparently, the ribbon diaphragm used in the PS8R weighs only 0.02 times as much as a typical soft-dome tweeter diaphragm — hence the impressive transient response, very low distortion and extended frequency response (claimed to stretch to 40kHz).

The large, flat surface of a traditional ribbon driver helps to ensure a good sound radiation pattern (called isophasic, meaning that the sound radiates in a coherent wavefront). In addition, there is nothing substantial in front of the ribbon to get in the way and cause diffraction, and the mechanical coupling between ribbon diaphragm and air is almost ideal, which further aids an even dispersion across the entire working frequency range. Sound waves radiated from the rear of the ribbon diaphragm are absorbed internally to avoid interference with the frontal wave.

Yet another advantage of the ribbon design is that it's a purely resistive load — there are no nasty frequency-dependent impedance changes — which not only makes it an easy load to drive, but simplifies the crossover design too, with obvious sonic advantages. Also, the balanced magnetic forces from the push-pull motor assembly mean there is no stray magnetic field that needs to be screened out.

The bass driver in the PS8R is an eight-inch unit with a phase-correction 'plug' built into the central dust cap, which helps to control dispersion. An aluminium voice-coil is used to ensure high power handling.

The active crossover melds the two drivers at 1.5kHz, and the integrated power amplifiers provide 50W to the tweeter and a very generous 270W for the woofer. Those figures indicate the relative efficiency of the PRD tweeter design! The overall bandwidth is given as 44Hz to 30kHz (±3dB). The crossover and amplifier circuitry incorporates a frequency-progressive limiting feature to protect the drivers when being driven hard, and there is a 30Hz subsonic filter to prevent inaudible LF from causing overload and overheating problems.

The amplifier topology is described as an "Evenstar sigma-delta 1-bit discrete digital amplifier" — which means class-D to most people! This type of digital amplifier is rapidly gaining favour in active speakers, as the technology has improved to the stage where it can compete on a sonic quality level with typical analogue designs. The big advantage, of course, is efficiency... and light weight. Er... the two big advantages are efficiency, light weight, and lower manufacturing cost. Er... the three big advantages are... Well, you get the idea! Basically we're talking about low power consumption and the lack of a need for expensive and heavy mains transformers or large heatsinks.

The baffle design places the PRD500 ribbon tweeter in a die-cast aluminium waveguide which bestows a 120-degree horizontal dispersion, with 30-degree vertical dispersion. That lower angle helps to minimise sound splashing off the mixer surface and ceiling, while the wide horizontal angle maximises the stereo image and listening sweet spot. The waveguide also reduces cabinet-edge diffraction effects that would otherwise blur stereo imaging. To allow the cabinets to be placed on their sides, the waveguide can be removed, rotated 90 degrees and reinstalled, if required, although it is not ideal to use the monitors horizontally.

The chunky bass driver is mounted conventionally, and the whole reflex cabinet is substantial, well-braced MDF, and a very solid thing. The front-facing port is a long, thin slot across the bottom of the baffle. A single cabinet weighs 21kg (47lbs), which is a lot for something that measures a modest 267 x 483 x 314mm (10.5 x 19 x 12.4 inches), and you can't blame the tough 'weather-resistant', latex-based black paint finish, either. 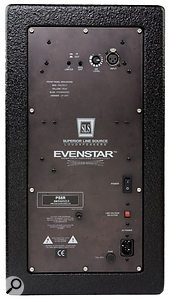 The rear of the PS8R includes the usual controls you'd expect on this type of speaker, including the on/off switch, a low-frequency limiter, an 80kHz high-pass filter and a volume control.Photo: Mike Cameron

The rear panel is pretty simple in comparison with many active speakers. The IEC mains inlet is at the bottom, with a voltage selector and on-off switch. The ubiquitous blue LED on the front baffle illuminates brightly when the monitor is powered, and dimly when in stand-by mode, which is activated automatically if there has been no input signal for a period. The speaker wakes up again as soon as an input is detected.

The audio input is on an XLR socket, with an adjacent level control (which goes down all the way to 'off'). There are two push-buttons, the first selecting a 12dB/octave, 80Hz filter, which is provided to allow acoustic integration with a separate subwoofer. The second push-button activates a low-frequency limiter designed to protect the woofer from excessive excursion. When the limiter is active, an orange LED shows on the front baffle. A yellow LED flashes when the amps are within 3dB of clipping, and a red LED warns that the protection circuitry has been triggered.

My first impression on firing up the PS8Rs (hooked up to a Bryston preamp and high-end Marantz DVD-A/SACD player) was that they sounded American! I don't mean that to sound in any way derogatory, but rather to serve as a description of the overall sonic character. These SLS monitors have the same kind of hard-edged, slightly 'shouty' quality, that I used to associate with pre-LSR model JBLs. Perhaps it is the intrinsic result of PA specialists designing studio monitors? It seemed that there was an emphasis on being able to play loud (actually, very loud indeed!), over absolute sonic neutrality and extension.

After prolonged listening, I found that there was a lot of detail and resolution in the mid-range, in a similar way to the venerable Yamaha NS10s. However, both the extreme bottom and top seemed curtailed and rather closed-in. More critical listening suggested that the effect was caused by the bass driver and/or crossover response, rather than any specific limitations of the ribbon drivers, but you'd need a decent acoustics lab and some expensive measurement gear to get to the bottom of that.

The point is that in direct A/B comparison with a variety of well-regarded European designs (I used my favoured PMCs as references, of course, along with small Dynaudio Acoustics and K+H monitors), the 'shouty' aspect of the SLS designs was quite prominent and, I have to say, not to my particular taste at all, especially when listening to choral and orchestral music in nice acoustic spaces. The stereo images were precise, but they lacked much sense of depth and had little air or spaciousness.

However, I persevered with the PS8Rs and found that I could produce decent pop and rock music mixes on them without too much trouble, and that these mixes subsequently translated very well to other systems. In many ways, I found mixing on the PS8Rs similar to working on Yamaha NS10s. The mid-range emphasis provides clarity and focus in this critical area of any mix, making imperfect balances and poor equalisation of bass and mid-range instruments and voices stand out prominently. Although I didn't enjoy the sound these speakers made very much, as a mixing tool for rock and pop they actually worked pretty well — which, at the end of the day, is what a monitor has to do.

One thing these monitors do extraordinarily well is play loud. Their physical size suggests a mid-field application, but actually they are quite capable of tracking drums in much the same way that most people would use far-field monitors. There aren't many speakers of this size that can handle real-life drum dynamics as well as the PS8R: snare drums, for example, are portrayed with a fabulous attack and dynamic. A subwoofer is really needed to fill in the weight and extension needed when auditioning kick drums at high level, but even without, these monitors gave an impressive performance. And I say that without ever seeing the protection or limiting LEDs flick on... so quite how loud they ultimately go is a scary thought!

To European ears, the PS8Rs will sound less neutral than many reputable designs of similar price, but for those who like to monitor loud, and with dynamic, rhythmic music, these monitors are worth adding to your auditioning list. But make sure you also invest in solid, stable speaker stands.

Although it really shouldn't be this way, every loudspeaker sounds different to every other, and so selection is as much about personal preferences as it is technical accuracy. To me, the sonic character of the PS8R relates to its country of origin, so for similar-sounding designs American models would be the first port of call. However, for similar financial outlay there is a vast array of monitors to choose from, and at this price point none of them are bad. Personal extended audition within your own working acoustic environment is essential for selecting monitors at this level.

Powerful active monitors with a bespoke ribbon tweeter design. The sound balance tends to be rather forward, but it is also detailed and very fast, which suits rock music well. They also have the ability to play amazingly loud.