This library features single-note samples of a mouth-watering collection of vintage synths, including models by ARP, Emu, EMS, Oberheim, Moog, Roland, and Sequential. The idea is that you create a playable patch by transposing each sample across the keyboard in your choice of sampler — if you have EXS24, Halion, or Reason, patches have been included to do this for you. The documentation cheerfully informs you that synth sounds 'nearly always transpose well when sampled', so only one note is included for many of the sounds, and never more than one note per octave. 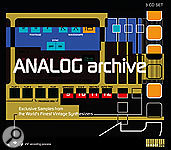 The flaw with this approach, though, is that it can't recreate the way most of these synths work: for instance, pitching a sample up an octave will effectively halve the envelope and/or modulation times of the sound's filter and amplifier, but it would be a rare analogue synth patch where these tracked the keyboard in this way.

Despite such conceptual problems, however, all is not lost. Although one note per octave doesn't build a particularly satisfying instrument in most cases, some of the unfiltered files present opportunities to create more usable patches which rely on your sampler's envelopes and filters — you lose the characteristic sound of the original filters, but at least your oscillator comes from a vintage analogue synth. Also, if you avoid transposing any of the samples too far you'll find you can coax out some useful bass and lead lines in practice. On the downside, though, the organic and evolving nature of many of the sounds sampled makes finding a smooth loop a challenge in most cases — as demonstrated by the rather lumpy loops in the bundled EXS24 patches.

To Sample Lab's credit, the audio has been well recorded, and covers a lot of ground sonically. The booklet also nicely categorises the hundreds of different samples both in terms of the synth that produced each and in terms of the attributes of the sound — there are categories for short and long notes, without and without attack, modulation, and filtering, as well as separate effects and percussion sections. If you're the kind of person who's willing to spend time creating custom synth sounds using a sampler, then there is no question that this library will present an excellent resource. Many potential customers may also be swayed into purchasing by the complete set of Roland TR808, TR909, and TR606 percussion samples, which of course are unlikely to present any transposition problems.

That said, I'm not sure that most creative electronic musicians work from these kinds of single-note samples these days, and 606/808/909 samples have been padding out libraries for ages. If Analog Archive had been released ten years ago, maybe I'd have got more excited about it. These days, though, I expect something a bit more usable for my money. Mike Senior

The title of this library doesn't necessarily give much of a clue as to its contents. However, it is from the same team as Unnatural Rhythm, reviewed in SOS February 2005, and the content is in a similar ball park — abstract, weird, and unsettling in equal measure. However, while Unnatural Rhythm is dominated by short (two- to eight-bar) rhythmic and pulsating loops, Incidental Gesture is more about textures and abstract melodies. As before, the collection is provided with an audio CD (for easy auditioning) and a DVD-ROM of 24-bit WAV files. As these samples are not really loops (many of them are over one minute in length), no REX 2 files are supplied. For the WAV files, both 44.1kHz and 48kHz versions are included, the latter giving compatibility for film/video work. For the purposes of review, I explored the 24-bit/44.1kHz WAV versions using Sony's Acid Pro, and this consisted of 1.6GB of data spread over some 130 samples. 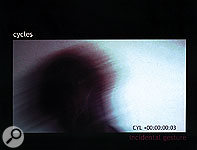 The material is divided into five folders. The content of the Rhythmic Beds folder is perhaps the closest to Unnatural Rhythm, containing 21 examples of rhythmic weirdness with lengths between eight seconds and two minutes. While the files are not Acid ised, the file names usefully include tempo and bar-length information, so it is very easy to make them loop if required. Sample names such as ArpegSuspense, MamboSqueel and TinDrumChase give a feel for what is on offer — these are intended to create a dark or dramatic feel and, as elsewhere within the collection, the sounds move from hi-tech through to ethnic in flavour.

The Narrative Expressions and Moody Essentials folders contain a variety of quirky soundscapes, bleeping or buzzing noises, and metallic bashings. These are more for sound beds or sound-design applications to create a particular atmosphere rather than to be used in a strictly musical context. The majority are over 30 seconds in length and some run to over three minutes — so not only could you score that scary scene, you could also make it scary for a loooooooong time! The final two folders — Melodic Meanderings and Horn Based Gestures — are more melody based, although even here things are pretty abstract and, on the whole, ambient. The Horn Based Gestures group is based on various sax, whistle, and clarinet phrases, and the mood is generally very lazy and relaxed. Some of these are straight recordings, while others have been suitably processed to the point of almost being unrecognisable. The breathy nature of some of these adds a definite ethnic feel to a composition.

In use, Incidental Gesture made an excellent complement to Unnatural Rhythm. Rhythmic soundscapes created with the latter can have a little detail and further atmosphere added via these samples and there is a consistency in the content that makes combining them very straightforward. While these samples may not have mass appeal, for those creating more experimental music or atmospheres for use with moving images, Incidental Gesture has plenty to inspire. John Walden

This library is split into three main elements: approximately 150 drum breaks, some 50 percussion loops, and 350 instruments. Given the 'Drum & Bass Producer Pack' subtitle, the drum and percussion loops are suitably speedy — original tempos are mostly in the 160-175bpm range — and nice and busy. The breaks are split into a number of helpfully named folders. For example, the Classics folder features a small number of 'bread and butter' drum breaks, while the names of the Rough Enough and Slightly More Polite folders speak for themselves. My particular favourites were within the Heavy category — lots of squashy kick drum and some suitably crunchy processing really did get my monitor cones moving! Throughout, the processing is nicely done, with plenty of variety from clean, 'in your face' loops through to those with a good dose of added ambience. While the quality was excellent, the only downside was that I was left wanting more! The same applies to the smaller number of percussion loops. These mainly consist of hi-hat, shaker, ride, bongo, and a small number of fills, and they can be useful to add a layer of sizzle to one of the breaks as required.

As might be expected in a library aimed at drum & bass producers, the instruments collection is pretty much devoid of any conventional instruments. Instead what we get is a varied collection of weird and wonderful bleeps, bloops, and buzzes — with a smattering of drum hits, stabs, and heavily processed vocal snaps thrown in for good measure. In the Refill, these are all available as NNXT patches and are organised into a large number of categories. As well as the more usual basses, pads, and drum hits, they include FX, Cosmic Pads, and Tek Sounds. There are plenty of choices within the bass sounds, from big and fat through to thin and fizzy. The contents of the Vox FX and Stabs categories were also good, although it would have been even better if there had been more of them!

Drum & bass is a pretty specialised musical genre and tracks are generally built upon a foundation of (often very busy) drum loops and a fairly minimal arrangement of other sounds. This library contains all the essential elements required to build complete instrumental tracks in this style. Some of the loops and sounds here do follow a fairly well-trodden path, but there would be more than enough to appeal to budding drum & bass producers. I've no criticisms of the quality of the material here but, at this UK price point, I think the quantity of material has suffered from the provision of so many different formats. That said, it's totally understandable from the perspective of the manufacturers — multiple formats cost more to produce — and those who want maximum flexibility may well consider this a sensible compromise. John Walden

Here you have not one, but two cathedral organs from Budapest, Hungary, the larger of which resides in the splendid Notre Dame de Budapest (also known as the Matthias Church). The second instrument hangs out in another part of town, in Notre Dame de Kispest. These are old buildings (the Matthias Church dates from the 13th century), but the organs are relatively modern and benefit from a mixture of traditional design and current technology.

The makers have picked a selection of the most useful single and combination stops from both instruments, sampling 45 presets from the first organ and 21 from the second. To avoid looping, the manual notes were sampled for thirty seconds and the pedals for a whole minute — definitely long enough for most musical purposes! Although the booklet (a fascinating read for pipe-organ fans) makes suggestions about choosing one or other of the instruments for different musical styles, there's no big difference in their sound; you can switch between them or layer their presets to your heart's content.

The samples cover a very broad tonal spectrum, ranging from soft flute stops like Flute Harmonique and Gedackt, both simple, plain, and lovely, to Anches 16' 8' 4' Sub + Super, a towering, steely gothic racket fit to usher in the apocalypse. Between these extremes, there's a large menu of accompaniment-friendly stops of various colours and strengths, as well as declamatory solo voices like Clairon and Krummhorn. My favourite preset, suitable for both solo and backing work, is Flute Traversiére, an absolutely beautiful, rich, floaty timbre. The composer Stravinsky slated the organ as 'the monster that never breathes', but this breathy woodwind-like sound might have given him second thoughts!

Sampled church organs need reverb like fish need water — the organ samples include a fair amount of the stuff, and to avoid the reverb suddenly 'drying up' at the ends of notes, the makers provide release-trigger versions for all the presets. NDB 's Csaba Huszty has also created some excellent convolution cathedral reverbs for Gigastudio 3 users, one of which is included in Tascam's Gigapulse factory presets. Swellbox, crescendo, and tremolo effects are faithfully replicated, while cathedral sound effects (bells, footsteps, whoopee cushions) further increase the audio realism. (I lied about the whoopee cushions.)

This large library (22GB in the Gigastudio 3 version) is an ideal tool for anyone who composes for pipe organ. Keyboardists and producers looking for a high-quality church-organ sound to add to a mix will also find it useful, though finding the right preset might take a few minutes! The creators are to be applauded for their serious-minded approach and unstinting effort in capturing every sonic nuance of these magnificent instruments. Anyone tempted to shell out some of their hard-earned cash for these glorious samples can take comfort from the fact that half the revenue is donated to the churches for restoration of the organs — however, from what I've heard here, they're already in pretty good nick! Dave Stewart