Beta Monkey Music are a US-based company specialising in competitively priced drum loop collections. Their various titles are mostly aimed at rock, pop, and blues styles, but the catalogue also includes libraries suitable for country, rap, and hip-hop. The library under review here is, like most of the other titles, based around a collection of 16-bit Acid ised WAV files. In this case, the CD contained some 700MB of acoustic drum loops and single hits. The loops are organised into a number of tempo-based folders (ranging from 75bpm up to 180bpm), while separate folders contain collections of one-shots and single hits.

The titles of the various folders give a good idea of the loop styles available: 'Funky Rock Swing', 'No Nonsense Rock', and 'Alt Rock Grooves', for example. The playing is excellent throughout — where required it is straight and powerful, but there is also plenty of more intricate stick work to be found in the more funky or shuffle-based loops. Both the recording and subsequent editing also seem to have been well done. The sound is crisp, with nice biting snares, plenty of sizzle to the cymbals, and a solid kick-drum sound. The loops seem to have a little processing applied, which gives them a nice natural ambience, but, thankfully, this is not overdone, so it was easy enough to add a little further reverb if required.

The real strength of the library is the range of loops provided. As well as the usual one-, two-, and four-bar patterns and their variations, there are some really excellent fills, intros, endings, and breakdowns provided. This really does make it easy to construct a complete drum track with a minimum of fuss, including all the necessary elements needed to glue the basic sections together and enough variation to make it sound 'real'. This is further enhanced by the excellent collection of single hits. While these could easily be used to construct a multi-velocity drum kit within a sampler, they can also be used to ornament a loop-based track. The various cymbals, in particular, are good — and all sorts of crashes, swells, and choked hits are included. The loops also have a fairly consistent sound across the folders, so it is easy to mix and match material for further variety.

I'd have no problem using these loops for any style of rock — from nu metal, through grunge, and into more pop-orientated indie styles — but they could also work in funk, blues, and straight pop. The other remarkable thing is the price, particularly as this includes worldwide shipping. Indeed, Beta Monkey also offer various bundles, bringing the price per library down even further. This is an absolute steal — so much, in fact, that I ordered half a dozen more libraries myself! These arrived very promptly and are now being put to good use in my own studio. Excellent value for money and highly recommended. John Walden

You guessed it: this is a follow-up to Opus 1, which I reviewed in SOS August 2004. Both these Horizon-series titles are compilations drawn from VSL's huge orchestral sample database, designed to uphold top sound quality and attention to musical detail while remaining affordable. Opus 2 is not a complete orchestral package, but is best seen as a supplementary volume which broadens the scope of its more comprehensive predecessor. However, with 13500 samples and a less-than-onerous price tag, the 9.3GB library deserves consideration in its own right. 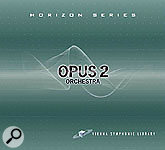 VSL's fine solo violin, viola, cello, double bass, and eight-player French-horn ensemble are the star turns, appearing here performing a basic, no-frills set of deliveries. The horns sound broad, majestic, and expensive, and composers will appreciate being able to switch instantly between the solo strings' various articulations at the touch of a key. Although these instruments appear in a far more elaborate presentation in VSL's Solo Strings and Epic Horns, the chance to acquire them together, albeit in cut-down form, is bound to appeal to some. Support acts include an eclectic set of auxiliary string-ensemble articulations (including a full menu of octave runs and fast staccato note repetitions) taken from VSL's Pro Edition (reviewed back in SOS March 2004).

Missing altogether from Opus 2 are solo French horn, tuba, harp, orchestral bass drum, snare drum, crash cymbals, tam tam, glockenspiel, xylophone, celeste, and tubular bells. (These are all supplied in the 27GB Opus 1.) Opus 2 includes marimba, vibraphone, timpani (glissandi only, no straight hits), some delightfully mad waterphone samples, and a set of cloppy cencerros (tuned cowbells) which would provide the perfect soundtrack for an episode of Bill & Ben set in Bali! Neither library has alto flute or piccolo trumpet.

For those operating within modest budgets, the two libraries together provide a first-class orchestral package, offering a combined total of over 50000 samples for less than a grand. As far as ratings are concerned, it's business as usual for VSL's latest release, but although Opus 2 gets five stars for quality and musicality, it probably merits a lower score for stand-alone usability. Dave Stewart

Anyone who has already bought Spectrasonics' Stylus or Stylus RMX will have noticed how simple it is to use high-quality loops at almost any tempo, and to process and effect those loops in new and interesting ways. Like the original Stylus, Stylus RMX features 'vinyl'-style loops in a more or less hip-hop genre, but its biggest draw for me is that you can use other Groove Control material, imported via a piece of software called SAGE Converter, or you can buy the extra material in the form of a dedicated SAGE Expander DVD-ROM for much less than the cost of the original sample CD-ROM.

The existing Spectrasonics Liquid Grooves, Backbeat, Metamorphosis and Retro Funk libraries have all been reincarnated as SAGE Expanders, but to extend the range further Spectrasonics have also converted the material from their Burning Grooves library, which had never previously been available in Groove Control format. Some additional 'bonus' material has been added, and there are some great ready-made multis that mix and match layers from the various libraries with the core sound set.

Each of the expanders comes on a single DVD-ROM, and the bonus rhythmic material (the same on each expander) is crafted from other Spectrasonics libraries, most of which is exceptionally good, with just the right balance of usability and quirkiness. For example, some of their vocal library sounds have been given the Groove Control treatment along with processed guitars and electronically treated rhythms. There are also a few welcome 'guests' from Distorted Reality.

Liquid Grooves remains a firm favourite, with its multi-layered, highly processed atmospheric offerings, but having it available within Stylus RMX vastly extends its capabilities, as its layers and elements can be used alongside those from the core RMX loop library and from other SAGE Expanders. It can also be processed using the Stylus RMX effects section, which seems to grow with every update. Furthermore, the plug-in's Chaos feature really adds life, by allowing the loops to improvise to a greater or lesser extent as they play. If you just apply Chaos to some beats of selected layers in a rhythm part, it can be hugely effective. Many of the Liquid Grooves loops have layers with pitched sounds, but these can be tuned to any key using the RMX front end.

Metamorphosis rivals Liquid Grooves for the title of 'weirdest SAGE Expander', as many of its loops also use pitched or extremely processed sound elements, creating what are almost finished sound beds from the start. Those without melodic content, and there are plenty of those to choose from too, often include highly processed acoustic drum sounds and/or ethnic drums. Add a melody or bass line and you almost have yourself the music for an entire TV documentary series! There's a vast range of material here — the original library came on three CD-ROMs. There are no additional bits and pieces, but then the core library would be very hard to 'out-quirk' anyway! The original idea behind Metamorphosis was that the user could manipulate the Groove Control MIDI files to create unusual variations or time signatures, so these loops respond extremely well to Stylus RMX 's Chaos feature and the application of further effects. If you need a bed from which to build chill-out music, then Liquid Grooves and Metamorphosis are great launching points.

Backbeat offers more solid, conventional rhythms, with the emphasis on usability, but don't imagine that they are in any way pedestrian. Again, these grooves sound very classy indeed and, layered with the more esoteric Liquid Grooves or Metamorphosis, combine solidarity with atmosphere. Backbeat shouldn't be confused with those libraries offering untreated drum sounds though — these are all tastefully produced and usable straight from the tin. This disk also includes a number of additional cymbal hit menus including Chinese cymbals and other exotic variants.

Retro Funk offers just what its name suggests, although it would also prove very useful for hip-hop productions. The kits range from the merely ambient to the quite obviously treated, but they all have a wonderfully finished, 'ready to use' quality to them. Sets of conga/bongo, shaker, and tambourine grooves complete the collection, and these work well layered with loops from the other libraries.

Burning Grooves is the latest addition to the SAGE Expander portfolio and is based on the Spectrasonics CD-ROM library of the same name, though everything has been reprocessed since the original release to put it into Groove Control format. The grooves are a little more rock-orientated than the other libraries and the drums are based on acoustic kits, but there's still a lot of processing and ambience in evidence, even on most of the traditional kit sounds, giving that by-now-familiar fully produced sound straight out of the box.

I don't want to go into great detail as to what's in each library, as you can easily find this out for yourself by looking back at the SOS reviews of the original sample libraries: Liquid Grooves, June 1997 & May 2000; Backbeat, December 2001; Metamorphosis, April 2001; Retro Funk, May 2000; and Burning Grooves, December 1996. Suffice to say that all the material is incredibly well crafted and that having the Stylus RMX engine enable such easy tempo-manipulation makes the material much more immediately usable than it ever was before. Furthermore, Spectrasonics have added a number of bonuses, and in addition to the extra sounds already mentioned, they've also set up some interesting layered patches, available from a menu at the top of the mixer page, comprising loops from different libraries. These use either loops taken from within a single library or combine that library's loops with some of the core RMX grooves — the software doesn't assume you've bought the whole set! These are well worth exploring, if just for inspiration.

Given the low cost of these SAGE Expanders, I feel they are a must-have for any Stylus RMX user, and I have absolutely no criticism of the quality of what's on offer. Some users have complained that the core library is a bit too hip-hop, but a little manipulation can turn it into just about anything you want. Having said that, I would like to see a library of less processed acoustic drum and percussion material in the style of BFD or DFH, as I think Stylus RMX would be a great way to power more conventional pop and rock songs. I'd also like to see some way of adding fills and endings, but these are just personal wishes. Taking the bigger picture, Stylus RMX is almost certainly the most advanced groove-based instrument out there, and the availability of these great SAGE Expanders makes it an extremely powerful and creative tool for just about all rhythmic musical genres. Paul White

SAGE DVD-ROMs, £55 each including VAT.