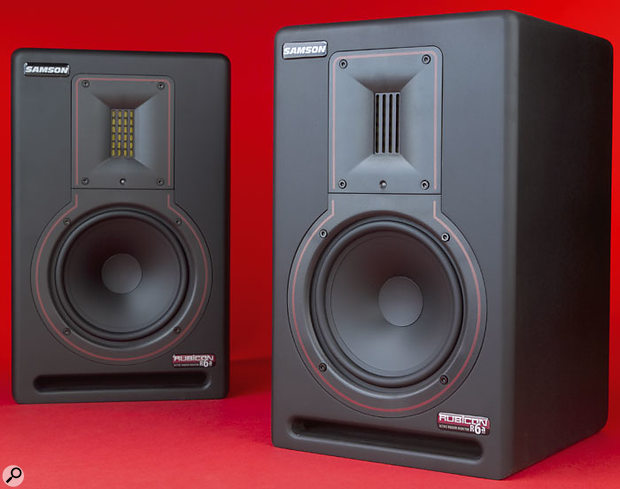 The performance of Samson's new project-studio speakers shifts up a gear courtesy of brand-new ribbon-tweeter technology.

The vast majority of studio monitors use conventional driver technology, combining cone bass/mid-range drivers with dome tweeters or, in the case of some larger systems, compression drivers feeding horns. In theory, ribbon tweeters have a better transient response than conventional tweeters because they have no voice coil, making them lighter. The lighter the moving parts of a tweeter, the less its inertia and the faster it can respond to high-frequency information. However, ribbons have never really caught on in a big way because they've traditionally been expensive to build properly, they can be fragile, and they have a limited power handling. Furthermore, their very low impedance makes them quite difficult to drive, so special amplifiers are usually required. You may have seen our reviews on the ADAM range of monitors which use a unique 'concertina' folded ribbon to increase the amount of air that can be moved — folding the ribbon increases the impedance, which makes driving the ribbons easier. 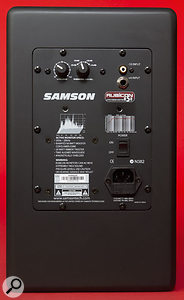 What Samson have done here shouldn't be in any way confused with ADAM's approach, as Samson's designers have stayed with a conventional planar (flat) ribbon. What they're done instead is use modern materials to try to overcome the limitations of traditional ribbon technology, while using mass-production techniques and offshore manufacturing to maintain an entry-level price. Their ribbon measures one inch by two inches, and is suspended in a magnetic field created by neodymium magnets. The membrane itself is made from Kapton, a tough synthetic material that is used in other areas of driver manufacture for making coil formers, and this is coated with a fine layer of aluminium to make it electrically conductive. In a ribbon tweeter, the signal current is passed through the ribbon itself rather than an attached voice coil, forcing the ribbon to move within the magnetic field according to Fleming's rules of electromagnetic induction. The underlying electrical principle is essentially the same as that of an electric motor, or indeed a conventional magnetic driver. In some ways, you can think of a ribbon as being analogous to a capacitor mic, while a normal tweeter is more like a dynamic mic. The analogy isn't entirely accurate, as a ribbon tweeter is still driven by magnetism rather than electrostatic forces, but the use of a low-mass membrane that is less susceptible to resonances than a semi-rigid diaphragm has certain similarities. 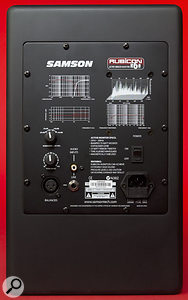 Photo: Mike CameronThere are two models making use of what Samson call their Velocity Ribbon tweeter, the Rubicon 5A and the Rubicon 6A. Both are two-way active monitors built into ported MDF cabinets, and the frequency range is remarkably similar on paper. The main difference between the two models is in the amount of sound level that can be generated, though the spec sheet manages to omit telling us what the maximum SPL actually is. Inside the cases are the necessary power amplifiers plus an electronic crossover, which includes a newly developed high-frequency control for matching the speakers to your room and sonic preferences.

The Rubicon 6A uses a six-inch inverted-cone bass/mid-range driver. This has a concave, rather than convex, dust cap and a butyl surround. A 75W amplifier powers the woofer, with a further 25W amplifier driving the tweeter. By contrast, the Rubicon 5A has a 50W power amp on the low end, and the cone driver is five inches in diameter. The 6A measures 9.25 x 15 x 10.75 inches (weighing 18lbs or 8.2kg), while the 5A is a more compact 8 x 13.25 x 9.25 inches (weighing 16lbs or 7.3kg). Both are similarly styled and feature a tough black painted finish with a red trim line on the front baffle. While the 6A manages a 57Hz-27kHz response (±3dB), the 5A fares almost as well with the same upper limit and a 58Hz lower limit. As stated earlier, the overall power, and hence maximum SPL, is the main difference between the two models as far as performance is concerned.

The cabinets, which have rounded corners, are 'shelf ported' via a slot at the bottom of the baffle, while the amplifier pack, controls and connections on the metal rear panel. There are both balanced quarter-inch jack and XLR input connections as well as an unbalanced RCA phono socket. Mains connection is via an IEC power socket with a power switch directly above it — a red LED on the front panel shows when the speakers are powered up. A continuously variable volume control allows for level setting, while the high-frequency EQ rotary switch operates on frequencies above 12kHz to provide the options of flat, -2dB, +2dB, or +4dB.

I have to confess that I wasn't expecting great things from a ribbon tweeter monitor at this end of the UK price scale, but as it turned out both models performed rather well. The high end turned out to be open and very detailed without sounding strained, and the ribbon tweeter crosses over smoothly into the mid-range. Compared with earlier Samson monitors, the difference is huge. 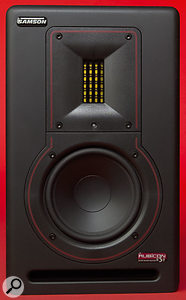 The smaller Samson Rubicon 5A.Photo: Mike CameronThe bass end is typical of a ported cabinet of this size and is perfectly adequate for a small to medium studio, though it is less solid than from my Mackie HR824s. There's also a little less of an impression of the front-to-back perspective that you get with more sophisticated (read 'expensive') monitors, but overall I was extremely impressed with the honest tonal balance, lack of obvious coloration, and ability to resolve detail. There's plenty of level to be had from both models, though the larger 6A seems more comfortable at very high monitoring levels. The 5A starts to sound just a hint 'tubby' when you push it really hard, but at sensible monitoring levels, and even slightly above, it sounds absolutely fine. My tests included a range of electronic and acoustic material as well as voice, and my feeling is that when the EQ switch is set to flat the speakers are just a hint forward sounding, but no more so than some big-name monitors. They're not fatiguing to work with for long periods and they seem quite tolerant of mounting position, with a wide sweet spot.

Despite my preconceptions, I have to concede that the Rubicons offer extraordinarily good value, without sacrificing any significant element of their audio performance that would get in the way of you doing a good mix. Corners have been cut to achieve the price, but it seems to me that they've been cut in the right places — the cabinet is simply painted MDF, while the baffle surrounds are moulded from plastic. Nevertheless, the speakers look great and seem to have been properly engineered. Whatever the traditional limitations of ribbons, this one sounds nicely transparent and seems happy at subjectively loud SPLs, and given that it is made from Kapton I can't see why it should be any less durable than a regular tweeter. Just as offshore manufacturing and a wider marketplace brought down the cost of capacitor mics, perhaps we're due to see the same thing happening with ribbon tweeters...

There are probably only four or five active monitors that I'd entertain for anything like serious studio use at under £400 per pair in the UK, but I'd have to add the Rubicons to this list. As they're so inexpensive, I'd go for the larger 6A if given a choice, but in the smaller studio the 5A certainly won't disappoint.

Given that these are relatively low-cost monitors, Samson have done a great job. Their new ribbon is a vast improvement over their old moving-coil tweeter. I'd be more than happy to mix on a pair of Rubicons in a typical project studio.