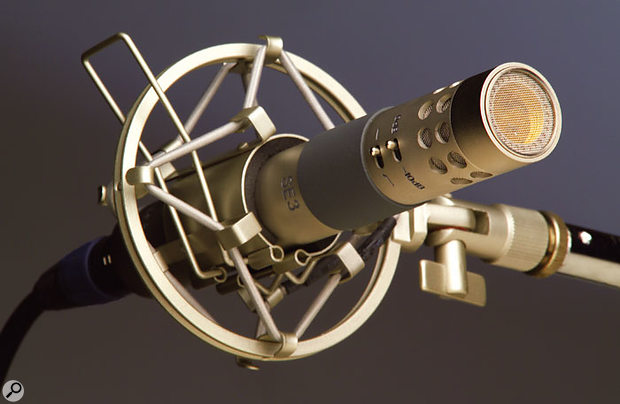 A new set of small-diaphragm mics offers solid and versatile performance at a fiercely competitive price.

Since SE Electronics set up their own factory last year, many of the models in the range have undergone extensive redesign and new models have been added to the range on a regular basis. The three models reviewed here all have diaphragms of a small to medium diameter, and the bodies are of the 'stick' type. The SE1A and SE3 are cardioid mics, and the SE2A has interchangeable heads for cardioid, hypercardioid, and omni operation.

The new SE1A is the upgraded and slightly longer successor to the SE1 cardioid mic, and combines a diaphragm a little over half an inch in diameter with a single FET preamp driving a transformer-balanced output stage. Like the other two models in this review, it is built at SE Electronics' factory in Shanghai, China, which helps explain its very low UK price. However, the standard of design and construction is nevertheless impressive, and all three review models came complete with shockmount. The SE1A weighs 200g.

With a sensitivity quoted as 10mV/Pa at 1kHz, the SE1A has a slightly extended frequency range of 20Hz-20kHz compared with its predecessor, and manages an Equivalent Input Noise of 16dBA, which is around the average figure for this type of microphone. These numbers may not mean much to the non-technical user, but in a practical test the sensitivity was much the same as (or even slightly higher than) that of other models of capacitor mic of a similar type I used for comparison, and certainly sensitive enough for any normal studio application. The noise level is also low enough to be negligible in most real-world situations, and was inaudible at normal monitoring levels when conducting close-miked instrument tests using an SPL Channel One mic preamp. For more distant or very low-level sound work, a specialist low-noise microphone may be a better option, but these tend to be costly.

The maximum SPL for one percent THD at 1kHz is 130dB, so even though the mic comes with no pad or filter switches, it can handle pretty much everything it is likely to encounter in day-to-day studio work. A very subtle presence hump centred at around 8kHz adds a natural airiness to the sound, and, as can be expected from a cardioid capsule of this type, the response becomes a little less flat when you move around to the side of the mic and work off axis. All three of these mics requires a 48V phantom-power source, and connection is via a three-pin XLR connector at the base of the mic. Similarly, all three mics are solidly machined, with a satin-silver finish embellished with the red SE logo.

The SE2A is designed along similar lines, but has interchangeable capsules to provide a choice of omni, cardioid, and hypercardioid pickup patterns. Connection between the circuitry and the capsule is via a spring-loaded, gold-plated pin, the ground return path being through the case metalwork itself — a fairly standard arrangement for this type of microphone. Changing capsules is simply a matter of unscrewing one and screwing on another. Technically, the SE2A has a frequency response covering 30Hz-20kHz, with a fairly high presence peak up at around 10kHz lending a slightly airy quality to the sound. The sensitivity is 10mV/Pa at 1kHz (-40dB ±2dB where 0dB is 1V/Pa) with an Equivalent Noise Level of 17dBA, very close to the figure for the SE1A. Certainly, when checked side by side, the sensitivities and noise seemed very similar. The maximum SPL (for 0.5 percent THD at 1kHz) is 137dB. Unfortunately, there's no figure-of-eight capsule available for this mic, which would have added further to its flexibility.

The SE3 is a slightly wider-bodied 'stick' mic with a larger diaphragm, providing a fixed cardioid response and a more extended low-frequency range. The nominal frequency response is 20Hz-20kHz, but again we have that high presence peak. The noise and sensitivity figures are identical to those of the SE2A, while the maximum SPL is just 2dB less at 135dB. Supplied in a wooden box with a tough-looking shockmount, the SE3 is fitted with switches for both low-cut filter and 10dB pad, and these are located between the grey band and the capsule housing. Although the capsule is slightly larger in diameter, it's probably fair to think of the SE3 as a deluxe equivalent of the SE1A, and it has similar instrument-recording applications.

The shockmounts that come with these mic are reassuringly substantial, with fabric-covered elastic belts holding the inner cage in place. The mic is gripped by the spring action of the inner metal sleeve, which has a foam lining to protect the mic body. A decent-sized thumbscrew enables the swivel bracket to be tightened adequately, and the plating on the shockmount matches that of the microphone.

I carried out most of my tests on these mics during an acoustic music recording session, where the SE1A was used on both acoustic guitar and on a small accordion. It worked predictably well on the acoustic guitar, capturing a solid and well-focused sound with both depth and detail. However, as always with acoustic guitars, even a relatively small change in mic position can result in a large subjective change in tone, which makes it very difficult to compare two different mics in the same application. The SE1A also worked nicely on the small accordion, where I used a stereo pair to pick up the instrument from both sides.

The character of the SE2A isn't significantly different to that of the SE1A, though the repositioning of the presence peak means that the response of the top end is very slightly changed, and I interpreted this as a very slightly more open sound. As expected, the omni capsule gives a less coloured, more natural sound than the cardioid variants, as that's the nature of pressure mics versus pressure-gradient mics, but the cardioid capsules both sound quite like the SE1A. The SE2A makes a great acoustic-guitar mic, but it can turn its hand to just about anything short of kick drums. 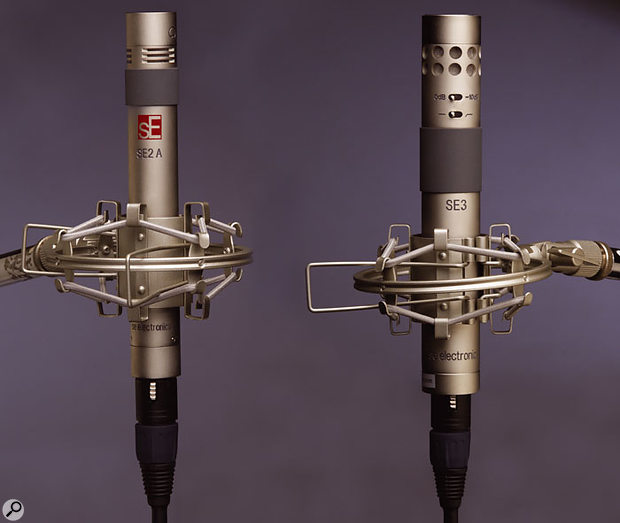 Finally, the slightly wider SE3 has greater bass extension than the other two mics and so may be better suited to bass instruments in addition to its other duties, but it also has a nice transparent and airy sound that works well with any sound source that needs detailed coverage. Again it works nicely on acoustic guitar, but also sounds pretty good on electric-guitar cabinets and just about any acoustic instrument you can think to point it at. The low-cut switch works effectively without interfering with the tonality of voice, acoustic guitar, or other non-bass instruments, while the pad does pretty much what it claims — drops the output by 10dB. In comparison with some other capacitor cardioid mics I dug out for comparison purposes, these SE Electronics models weren't any quieter, but they seemed just as sensitive and were in many cases able to capture a less congested sound that retained a strong sense of space and depth.

The SE1 was already fantastic value, but the new SE1A comes with a redesigned capsule and an updated technical specification for the same UK price. It is a ridiculously inexpensive microphone by professional standards, but it certainly doesn't look or sound cheap in any way that I could tell. Even though you can buy better-specified and more natural-sounding mics if you're prepared to pay out a lot more money, I really don't think you'd hear the difference unless you were working in a very well-specified professional studio with top-flight mic preamps and monitors or trying to capture extremely distant or low-level sound sources.

So, if you already have a large-diaphragm capacitor mic that you're happy with, would I recommend that you buy an SE1A for recording instruments? The honest answer has to be 'no' — I think you'd be mad not to buy a pair at this price! Small-diaphragm mics like this come in useful in all kinds of situations and having two means you can work in stereo.

Although significantly more costly than the SE1A, the SE2A is still pretty wallet friendly and offers greater versatility because of its interchangeable heads. I still think a figure-of-eight head would have made a nice addition, but in all it's a great little workhorse for instrumental and choral recording. It has the same family sound as the SE1A and SE3, but gives you omni and hypercardioid options, which are very welcome. If you need one general-purpose instrument mic that doesn't cost a fortune, this model is a strong contender.

Being a fixed cardioid, the SE3 isn't quite so versatile as the SE2A, but it does offer a high level of performance combined with good bass extension — thinking of it as a better SE1A at a higher price is probably fair. All three mics will work well as drum overheads, as well as for more conventional instrument miking, and the SE3 also has the benefit of greater bass extension, which is obviously a bonus when working with bass instruments. However, if you can only afford the budget SE1A, don't feel you're in some way buying a poor relation, because it certainly doesn't sound like one!

While these mics have quite ordinary paper specifications, they actually sound very open and musical and offer extremely good build quality and performance at very affordable UK prices.