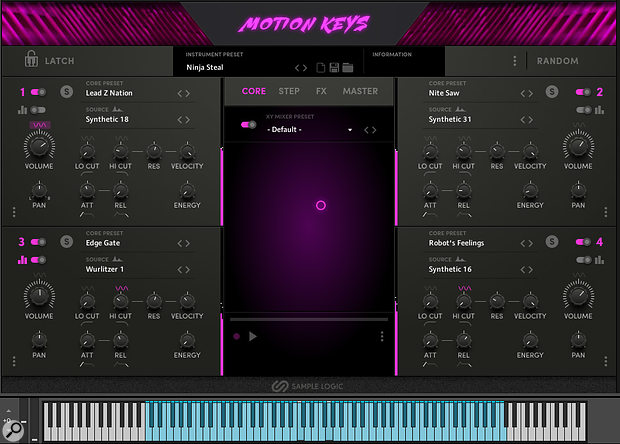 Sample Logic's powerful four-core sound engine has been at the heart of a good number of their hybrid virtual instrument/sample library products over recent years. It was recently refreshed in their Cinematic Guitars Motion library and the same reworked UI is also found in Motion Keys. As the title suggests, Motion Keys is built upon a 12GB sample library derived exclusively from keyboard-based sound sources. Requiring the full version of Kontakt 5.8.1 or later, Motion Keys ships with over 480 presets and, while there is no 'cinematic' in the title this time around, media composers are likely to be a big part of the target user group.

Sample Logic's current iteration of their four-core sound engine is now a mature and sophisticated environment within which to create sounds. Via the Core page, presets can be built by combining four of the underlying sample-based sound sources. Essential mixing features are built in for each core alongside amplitude shaping and LFO control over both volume and filter. The Core page's central X‑Y pad can be automated to provide real-time changes to the blend of the four sounds.

Things can get even more interesting with the options provided by the Step and FX pages. The former provides comprehensive independent arpeggiation systems for each core, with all sorts of possibilities, while the latter offers independent, six-slot, effects chains. The effects options are rounded out by a Master page section with a similar six-slot effects chain available. Other key features include an excellent tag-based preset browser and the ability to export MIDI generated by the internal arpeggiators to your DAW. The latter is a very useful addition to the UI's feature set.

Sample Logic's current iteration of their four-core sound engine is now a mature and sophisticated environment within which to create sounds.

This combination of features for providing time-based control over the underlying sounds is where Motion Keys fully delivers on the 'motion' promise of the title. However, it also delivers fully on the 'keys' bit and auditioning some of the single core sounds in isolation quickly demonstrates that the underlying sample base is very good indeed. Whether it is conventional acoustic pianos, harpsichords, organs or a variety of synths old and new, Motion Keys offers a broad palette of sonic building blocks.

However, the real magic comes when the two components — underlying sounds and motion engine — are added together. The results are fabulous, with a huge range of hybrid keyboard sounds available. The presets are excellent and span a whole range of moods. Film and TV composers will love the instant inspiration and Motion Keys would also be a great tool for some electronic music styles. No, it's not cheap (although there are discounts for some existing Sample Logic customers and an intro pricing offer at the time of writing), but this is a truly inspiring virtual instrument. Top-notch stuff!