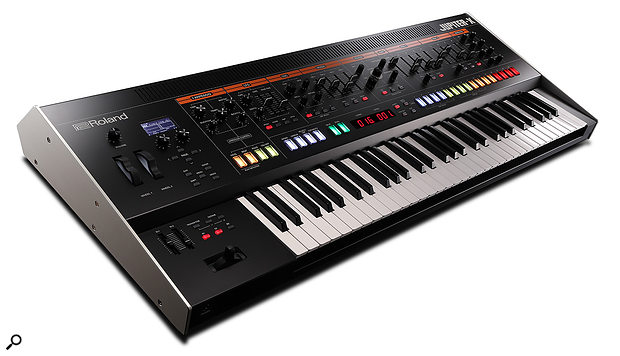 The Jupiter name comes loaded with expectation. Can Roland hit their own high standards?

In 2017 I reviewed the Roland System 8 and concluded that it sounded great; its own synth engine was a revelation, and I was impressed with its Jupiter 8 and Juno expansions. But there were aspects of it that left me cold. My greatest frustration was its four-octave keyboard, which meant that I had to treat it as an expansion module if I wanted to take full advantage of its sounds and, while it doubled the polyphony of the Boutique modules that preceded it, it was still only capable of producing eight voices at a time. It also offered limited patch and performance memories, lacked an XLR microphone input, its screen was tiny, and it was powered by an external power supply that, for me, made it unsuitable for live use.

But now Roland have released the similarly targeted Jupiter X. With its beautiful design and higher quality hardware, five-octave velocity- and pressure-sensitive keyboard, greater polyphony and internal power supply, this seems to be the instrument that the System 8 never quite aspired to be. Consequently, I was delighted to be offered the chance to review it.

Unfortunately, some of my initial enthusiasm evaporated when I tried to find out what was going on inside it. The documentation was of little assistance so, before continuing, I wanted to work out exactly what the Zen Core, the Base Engine, the Instrument Specific Applications and everything else mentioned in the blurb really are.

Zen Core & The Base Engine

It took me weeks to fully plumb the depths of the Jupiter X but, having done so, I now feel that I can explain it in just a few paragraphs. It's based upon a new chip called the Behaviour Modelling Core, or BMC. This runs an operating environment called Zen Core that is, in many ways, the equivalent of the operating systems that run on the Intel chips in your Mac or PC. A number of applications running within this environment then provide the various synthesizers and other facilities on offer. The sounds that you generate using these synthesizers are called Tones and, with certain limitations that we'll address shortly, you can insert any Tone into any of the five Parts available. Each Part then adds a dedicated MFX (multi-effect), and the mix of all five Parts plus four global effects is called a Scene. A final EQ and compressor across the outputs complete the signal path.

The first of these applications is called the Zen Core Base Engine. This generates all but one of the effects and also provides a powerful four-Partials-per-Tone synth architecture that echoes many Roland products from the JV1080 onward. It can generate up to 256 simultaneous Partials so, depending on how many Partials you invoke per Tone, that's a polyphony of between 64 and 256 notes if just one Tone is being played. So far, so good... but my confusion began when I found what seemed to be five separate Base Engine synthesizers called Common, PR‑A, PR‑B, PR‑C and PR‑D. Further investigation revealed that all of these have access to all five of the Base Engine's PCM sample libraries and all of them share the same synthesis structure, so I asked the chaps at Roland what's going on. Their explanation boiled down to this: what appear to be five separate synthesizers are merely ways to organise the factory sounds. To add to the confusion, I spent considerable time looking for the Base Engine's virtual analogue synthesizer and discovered that there isn't one. Instead, there's a parameter called OSC Type within what I had perceived to be its purely PCM-based synthesizer. The second of its five options is VA and, if you select this, you have access to nine analogue-style waveforms. Nevertheless, these oscillators' outputs still pass through the same filters and amplifiers as a PCM-based sound.

The Base Engine also generates the Jupiter X's drum kits, and Part 5 of every Scene is dedicated to these. There are 91 kits available and you can modify them using some basic filter and contour adjustments, but no fine editing is possible. In truth, this didn't bother me; the underlying samples are available within the Base Engine libraries and you can build sounds based upon them, but if you want drum tracks in your music there are better ways to obtain them.

The final sound generator in the Base Engine is a vocoder, which is constrained to Part 1 and can't be used with an MFX. It's very simple: plug in a suitable microphone, adjust the input gain, gate, compression and any effects applied to the input signal, select one of two possible carriers, play and sing. Its output is clean, intelligible and very useable.

The rest of the synthesizers offered by the Jupiter X are generated by engines called Instrument Specific Applications. There are six of these and, in principle, they can run on any other instruments based upon the BMC/Zen architecture.

When I first heard of the Jupiter X I was delighted to learn that it was going to host a piano derived from the RD-700GX. But I was later surprised to discover that its RD Piano engine is based upon nothing more than 18 samples in the Base Engine's ID:E library. What's more, it shares the same parameter map as the Base Engine synthesizer. Consequently, I couldn't see why Roland describes it as an Instrument Specific Application, nor why it should be constrained to Part 1 of a Scene. The answer appears to lie in its dedicated effect. Rather than allow an MFX to be used, a Sympathetic/Cabinet Resonance effect is provided and the chaps at Roland claim that it's this that restricts the RD Piano to Part 1. This makes no sense to me, but I ended up looking at it like this: you can program Tones using the ID:E samples and sympathetic resonance in Part 1 or the same samples and an MFX in Parts 2, 3 and 4. Alternatively, you can insert anything else from the libraries into an RD Piano Tone in Part 1 to take advantage of the sympathetic resonance effect. But a huge amount of confusion would have been avoided had Sympathetic Resonance been programmed as a standard MFX.

Moving on, I was hoping that the XV engine would be based upon a dedicated XV5080 sample library, but it isn't, and comparing the original's waveform list with the Jupiter X's libraries reveals that its PCMs are scattered throughout them. What's more, the XV engine again shares the same parameter map as the Base Engine synth, so there's nothing to suggest why it's any different from it. The answer appears to be that the filters, contours and LFOs of the XV engine are based upon the XV5080, whereas those of the Base Engine synth are not. Certainly, the XV factory sounds are very similar to those of the original but, since the parameter map is different, you may have to find appropriate compromises if you want to recreate your own XV5080 sounds on the Jupiter X. On a positive note, you can use all of the Jupiter X's PCMs within the XV engine to create what is, in effect, a greatly expanded XV5080.

Now let's look at the physically modelled engines. These are not based on the ACB algorithms used in the System 8 but on a less power-hungry technology called ABM (analogue behaviour modelling). Roland describe ACB as being 'ultra-precise' whereas ABM offers 'a more holistic and dynamic recreation' of vintage synthesizers; in other words, the company's engineers have attempted to obtain similar results without modelling in as much detail as before. So... how successful have they been?

I compared the Jupiter engine in the Jupiter X to my Jupiter 8. Not to put too fine a point on it, the ABM engine sounds gorgeous but it's not quite as accurate as the ACB version. However, I'm not about to complain about the difference, especially since the ABM engine offers a maximum of 32-note polyphony, responds to velocity and aftertouch, has a slightly expanded parameter set and has a wider range of values for the LFO rate as well as the filter cutoff frequency, resonance and filter envelope depth, all of which add to the engine's capabilities without in any way detracting from its Jupiter-i-ness. What's more, despite some significant differences in the layouts of the two synths, programming the Jupiter X can feel much like programming a Jupiter 8, and that's no minor accolade.

The same is true of the Juno engine. While the ABM parameter map is more accurate to the original than the ACB map, there are occasions when it doesn't quite hit the spot. For example, the Junos' organs (created using the sub-oscillator for the 16' drawbar, the oscillator for the 8' drawbar, and the self-oscillating filter for the 5-2/3' drawbar) are classic sounds, but the Jupiter X doesn't recreate them perfectly because the filter doesn't sync to the oscillator in the same way. Furthermore, the MFX Juno Chorus isn't quite the same. It can sound excellent, but it's not precisely the same.

Next we come to the JX (JX8P/JX10) engine. My Super-JX10 was my primary keyboard for nearly a decade so I liberated it from storage, placed it next to the Jupiter X and performed a detailed comparison between the two. While it's still quite close, I found JX to be the least authentic of the Jupiter X's engines. Some of the differences are functional — for example, there's only one sync mode rather than two — while others leap out when programming; things such as the difference in how cross-mod affects DCO2, or the maximum filter resonance, which is far more aggressive on the original. Would this bother me if I were approaching the Jupiter X without having programmed a JX10 to within an inch of its life in the 1980s? No, it wouldn't; it's an excellent synthesizer even if it's not a perfect recreation of the original.

Finally there's the SH engine. Again I made a direct comparison with the original to assess the transition from ACB to ABM. On this occasion I was impressed with the accuracy of ABM. Sure, there are small differences, but I could almost always recreate the sounds of the SH101. Furthermore, the additional facilities offered by SH take it to places that no SH101 ever knew existed.

All of the vintage emulations also have access to a facility that I haven't mentioned yet; a set of three buttons in the filter section marked R, M and S. Up to this point, I had only been using the R mode that provides models of the original Roland filters, whereas the other two options refer to models of the filters offered on vintage Moog and Sequential synths. As you might imagine, changing the filter type can make a significant difference to the timbre, and this opens up a whole new set of possibilities for each engine.

At the other end of the philosophical spectrum, the Jupiter X provides two functions that make the vintage synth engines behave badly. The first is ageing which, in theory, emulates the deterioration of the components in analogue synths. The second is Warm Up, which offers several parameters to make the pitch drift as the internal temperature of the Jupiter X increases. Only people who never played in the 1970s would dream of reintroducing these problems; we were ecstatic to leave them behind nearly 40 years ago, and to reintroduce them here is madness. It would be like buying a modern superbike with oil leak, drum brake and excessive vibration options. Insane!