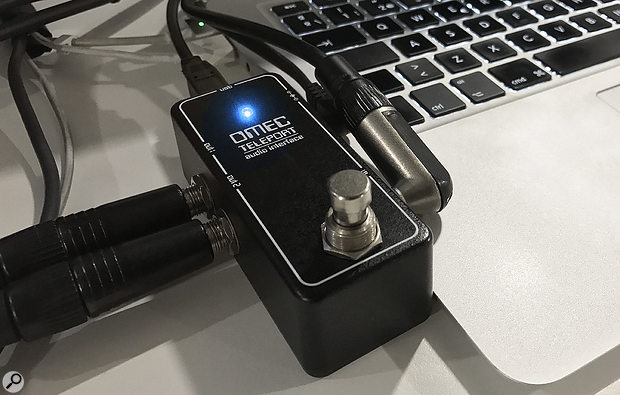 The Orange OMEC Teleport Guitar Interface is made specifically for use with electric guitars — it is designed with an appropriate sensitivity and high input impedance. That said, it can also work with a dynamic microphone if you use a suitable adaptor cable. It can be used with iOS (6 or later), Android (4.2 or later), Mac OS (10.6 or later) or Windows (7 or later) without requiring additional driver software, though Windows users might prefer to use the free ASIO4ALL driver for best results. Note, however, that you will need to use a USB adaptor to work with mobile devices — specifically a Camera Kit for iOS and an OTG for Android. To sweeten the deal further, a copy of IK Multimedia’s AmpliTube CS is included, and this comes with virtual Orange amps (the OR120, Tiny Terror, Rockerverb 50 and AD30) and matching Orange Cabs.

In a live environment, Teleport can provide an interface between the guitar and a suite of amp- or pedal-modelling apps running on a phone or tablet, or it may be used to drive something like Jam Origin’s MIDI Guitar app to turn your guitar into a guitar synth. Its stompbox format means you can bypass it just like a regular pedal. In the studio it provides a convenient means of DI’ing your guitar, and with a specified latency of just 4ms, the experience of using the Teleport is almost instantaneous, as long as your connected system doesn’t add excessive latency of its own.

Housed in a compact metal pedal enclosure, the Teleport uses a 16-bit delta-sigma A-D converter that can operate up to 48kHz with a specified signal-to-noise ratio of 96dB and with distortion lower than 0.01 percent. Don’t let the fact that it is 16-bit rather than 24-bit put you off, as it still has a wider dynamic range than is needed for electric guitar, even if it is unusual to find a manufacturer still using 16-bit converters.

Teleport is configured as a one-in, two-out device, enabling it to get the best from stereo apps. (The In and two Out connections are quarter-inch jacks, as you’d expect). A 9V, centre-negative, external PSU (not included) is needed, because the Teleport can’t be bus powered. When powered up, and the footswitch is engaged, a bright blue LED lets you know all is well. There’s a mini USB 2 socket and cable for connection to phones, tablets or computers and the footswitch allows for the unit to be bypassed, feeding the input to both outputs.

Using the Teleport is easy; there’s nothing to set up other than selecting it as the active audio device. The fixed input sensitivity provides a sensible record level from most guitar pickups. Tested with Logic Pro X, with Teleport selected as both the input and output audio devices, I experienced no significant latency issues. If you rely on modelling apps when playing live, then the OMEC Teleport provides a practical and robust solution, and the bundled apps make it very good value. On the other hand, if you only need an interface for recording, there are plenty of alternatives from which to choose — many offering greater functionality, with 24-bit resolution and the option of working at higher sample rates.