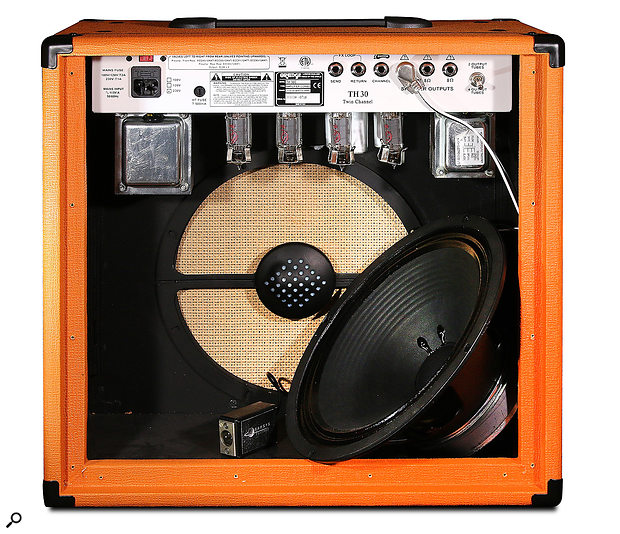 Save setup time and space on busy stages with this crafty guitar-amp miking solution!

Miking a guitar amp, whether live or in the studio, is a blend of art and science. The SamSystems Integral 10 and Integral 12 models offer a convenient alternative to setting up a mic and then hunting for the best mic position. As their names might imply, the Integral 12 is designed for use with a 12-inch speaker and the Integral 10 for a 10-inch speaker, but they seem identical in other respects. In essence, the Integral offers a way to close-mic a speaker from inside the cabinet but with the mic still in front of the speaker cone. Installation is simple in most amplifiers or speaker cabinets but it still isn’t something that can be changed quickly, so might be less suitable if you have to work with a lot of different amplifiers — unless you buy several Integrals of course. However, for the live player or session musician with a favourite amp, it has a lot going for it, not least consistency of results.

OK, so what exactly is it? Physically, both versions resemble a hi-tech plastic Frisbee around 4mm thick with an outer rim and two spokes that support a mic housing at the centre. This assembly is designed to be fitted between the speaker and the baffle, and is easiest to fit to those cabinets that have the speaker mounted on the rear of the baffle. The outer rim has holes to match the most common speaker mounting points (though it would be easy to drill new ones if needed), so all you have to do is remove the speaker retaining nuts or screws, lift out the speaker, drop the unit over the bolts with its flat side towards the speaker grille, then replace the speaker and nuts. The dynamic microphone capsule inside the perforated housing is angled off-axis for optimal sound capture, and the cable feeds along a channel in one of the spokes and then terminates in a small plastic connector box with a balanced XLR output. The connector box can be fixed to the inside of the cabinet, providing a semi-permanent installation.

Things are slightly more complicated if you have an amplifier where the speaker mounts from the front, as you’d need to make a small hole in the baffle through which to feed the cable, and this would mean removing and then replacing the connector box. Getting at the speaker in an amplifier of this type also involves a little more disassembly as the grille cloth has to be removed. Where the cabinet has a fully closed back, an XLR connector can be fitted to a hole in the back panel as an alternative to the connector box.

We’re told at the outset that the sound from the mic is not intended to replicate an SM57 stuck up against the speaker grille, but rather to give a well-balanced, lively sound. You can’t change the mic position to move closer to or further from the speaker axis as you might in a traditional miking situation, but apparently the designer spent a lot of time finding the optimum mounting angle.

Home On The Orange

We were loaned an Orange combo with an Integral system already fitted, and rather than compare the result with my usual miking setup, I opted instead to see what difference I could hear between the recorded sound and the way I heard the amplifier in the room.

With both clean and overdriven sounds, the recorded sound from the Integral’s mic had more edge to it than the amp’s natural sound, and a spectrum analyser showed up a presence peak at around 4.25kHz. Putting in just a few dB of cut at that frequency brought the results more into line but I also needed to add a little low-end boost to restore the warm bottom end of the amp. With that done I felt the recorded sound matched the amp’s natural sound pretty well, though I have to say that it also sounded pretty good with everything set flat. As the miking setup never changes, you can finesse your EQ settings and save them, knowing that they’ll always be useful. Clearly the convenience aspect of these Integral devices is most appealing for live performance, but there are certainly studio applications too.

There are mic stands that clip onto the guitar cabinet itself but, other than that, you’d struggle to find a direct alternative.

A very practical internal mic system for live use that also has some studio applications, especially where space for mic stands is limited.