These highly portable and affordable active column systems make the benefits of line-array PA more accessible than ever! 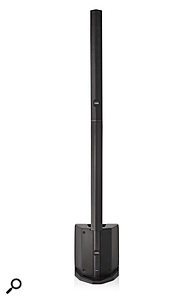 SubZero’s new SZPA-L68 PA system follows the increasingly familiar mini line-array format, with this example comprising a separate eight-inch woofer supporting a two-piece column, hosting six 2.75-inch mid/high cone drivers. Closer inspection shows that alternate drivers are angled a few degrees left and right, presumably to further increase the horizontal dispersion. The lower section is essentially a spacer to get the speakers at the right height. If you don’t need the full height, the spacer column can be left out and the top section connected directly to the woofer. While the manual describes the eight-inch speaker as a subwoofer, it might more accurately be described as a straightforward woofer as it goes down to 50Hz — which is about the same as a traditional full-range speaker cabinet. A crossover at 180Hz sends the mids and highs to the column speakers, which have an upper limit of 20kHz.

The benefit of such systems, apart from their obvious compact nature and light weight (18kg in total), is that their horizontal dispersion is much wider than their vertical dispersion, so they waste less energy on the ceiling and project more of the sound into the audience, also giving good coverage for those listeners close to the front of the room. That way you can often get away with a single system rather than the more usual pair of cabs. This particular system incorporates a preset compressor/limiter to avoid clipping, while further protection for the mid/highs is provided by what is described as a poly switch — a self-resetting circuit breaker that steps in if the drivers are being pushed past their safe limits.

Despite its small size and ease of portability, this particular SubZero PA system packs 250W (RMS, 350W peak) of Class-D amplifier power, shared equally between the woofer and the column speakers, with all the electronics residing in the sub. By the appropriate use of tough plastic in place of the more usual metal or wood for both the sub cabinet and the column sections, the overall weight has been kept down to 18kg. Setting up has been made easy as the sub-to-satellite connectors are built into the cabinets, so no cables are needed other than for power and the mic/line inputs. Each column has what looks like a large camera-style shoe built into it and this slides into a mating part on top of the unit below. A perforated metal grille protects the drivers, and an included soft carry case holds the two columns. 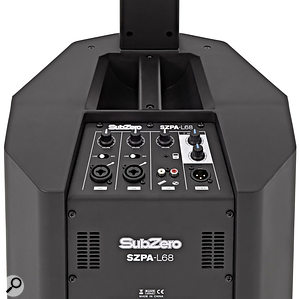 The SZPA-L68’s subwoofer houses a basic mixer section that can accommodate two mic/line inputs, and a stereo line source.Housing just a single eight-inch driver protected by a steel grille, the sub is fairly compact and easy to lift with one hand via its integral carry handle. A flange at the base extends forward of the cabinet to increase stability, and once assembled the columns feel very secure. However, as with any such ‘slot-together’ line array, I fear what may happen if a drunken member of the audience were to fall onto it, as I doubt the couplers could survive much abuse given the amount of leverage resulting from such a long, narrow structure.

As is becoming increasingly common with active PA speakers, basic mixing facilities are built in to allow for stand-alone use when only a couple of inputs and perhaps an additional backing track feed are needed. Sited on an angled panel at the top of the sub, a pair of combi XLR/jack inputs can be switched for mic- or line-level signals, and each has its own volume control. There’s no phantom power so it is a case of dynamic mics or battery-powered electret mics only. A third input, also with a volume control, is accessed via stereo RCA phonos or a TRS mini-jack and operates at line level only. This would normally be used for playback devices but could also be used to input a keyboard or other line-level instrument using the appropriate adaptor. A two-band EQ can be used to tailor the overall PA sound, and there’s an XLR output that carries the mixed signal for linking to a second system. There’s no master volume control, but with only three inputs that’s no great loss.

So far then we have a compact and eminently affordable system with a medium power rating that is light and very quick to assemble. However, what really matters is how well it performs in its given applications. A system of this size and power is unlikely to be up to the job when working with a full band that includes acoustic drums. A more likely scenario is that the system will find favour with solo artists, duos or mainly acoustic ensembles not needing to amplify a lot of low end, where the SZPA-L68’s quoted maximum SPL of 114dB will suffice. 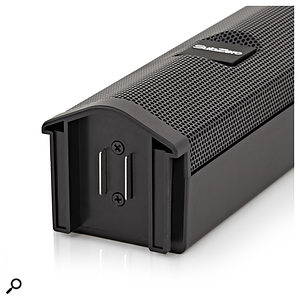 A click-in mechanism secures the column to the subwoofer.After checking recorded music playback, which the system handled well at moderate levels, I took the SZPA-L68 to a pub gig where the trio in which I play was performing. We use one electric guitar, one acoustic guitar, a cajon and two vocal mics, with the vocals, the cajon and a DI feed from the acoustic guitar amp all going through the PA. It was one of those rather cramped gigs where the vocal mic ended up closer to the speaker than we’d like, but straight away the SZPA-L68 impressed with its resistance to feedback.

To achieve a crisp vocal sound I rolled off just a little of the low end and added a hint of top on the two-band EQ, feeding the line input from our own small mixer with the EQ set close to flat. Acoustic guitar came through with creditable definition while a useful amount of weight from the cajon came through the woofer. It is also worth commenting on the wide horizontal coverage, which served us well in what was a rather oddly shaped pub bar.

Listening from an audience perspective, the sound came over as clear and well balanced with plenty of level for our needs. We can get pretty loud on occasions (given our no-drums format) but the speaker kept up. From a performer’s perspective behind the column, the speaker sounded somewhat muddy as very little in the way of mid/high information finds its way rearwards — which is as it should be. That means some kind of monitor is advisable; we used our regular Mackie SRM150 to give us some kind of clarity. Setting up and pulling down was pretty easy, though the mounting shoes were a little stiff (being brand new), but presented no real problems. 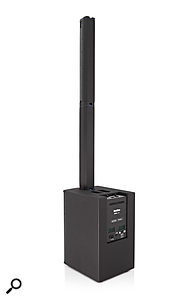 The larger SZPA-L812.In such a small venue it was also of benefit having such a narrow speaker as it doesn’t block the audience sight lines nearly so much as a conventional box speaker. It’s fair to say that more costly line arrays will usually deliver more level and greater tonal accuracy — I found that material with a lot of HF content could start to sound a touch scratchy if you really pushed the levels — but given its very low cost, there’s not much to complain about here. It certainly deserves a closer look if you need something portable for a solo act or duo playing smaller venues.

If more power or greater bass extension is required, then the larger SZPA-L812 system may fit the bill, as it features a 12-inch ported sub teamed with eight drivers in the upper column and packs a total power of 550 Watts RMS, producing a maximum SPL of 120dB. It has a low-frequency limit of 45Hz and an upper reach of 20kHz, with the crossover frequency set at around 160Hz. Feeling weightier and far more substantial (the overall system weight is 28kg), the sub is built from plywood and, being taller than the SZPA-L68 sub, the two columns have been made shorter to maintain a similar overall system height when assembled. The way the column, which is a little wider than for the SZPA-L68, fixes to the bass cabinet is via a slightly larger shoe fitted with a latch that has to be pressed to release the cabinets. There’s a top handle integrated into the woodwork making the sub a fairly easy one-hand lift — though you might not want to carry it as far as you’d be happy carrying the SZPA-L68 sub. 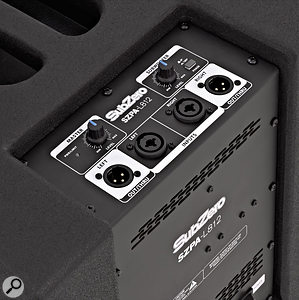 Although larger, the L812’s subwoofer has a simpler input section, as it is assumed that you’ll use it with an external mixer.Its control section actually offers fewer facilities than the SZPA-L68. There’s no mixer, just left and right balanced XLR/jack line inputs (summed to mono internally), stereo out/thrus on XLRs for chaining to other systems, a master volume control and a separate volume control for the sub. There’s also a polarity invert switch for the sub. Clearly then, the SZPA-L812 is designed to be used with a separate mixer.

On vocals the sound turned out to be very similar to that of the SZPA-L68, albeit a few dB louder, but when playing back tracks from my iPod, the sub put in a much more assertive performance. In fact the general quality of music playback is much better than from most two-way active boxes, certainly at this end of the price scale, where the sub manages to sound both punchy and well controlled. Having multiple small mid/high drivers helps keep the mid-range clear, which is very important for both music playback and natural-sounding vocals.

Given that the system is capable of an additional 6dB in the SPL department and that it has a sub more deserving of the name, it comes as some surprise that it only costs around 50 percent more than the SZPA-L68. So if you don’t mind sacrificing a little portability, the SZPA-L812 may be the more appropriate choice, especially if you need a system with a little more heft and weight at the bottom end.

Smaller line arrays are popping up all over the place from many of the big names in PA, with LD Systems offering some keenly priced options. If your budget can extend a little further look at the HK Elements system or JBL’s Eon One. And if you’ve just won the lottery, buy a Fohhn.

Both systems offer exceptional value, though I’d be tempted to hold out for the larger SZPA-L812 if putting much low end through the system.