Scuffham Amps’ S–Gear appeared on the scene in 2012, and quickly established itself as offering a lot of amp simulator for a modest price. Although it offered only three amp models and two effects processors, these were cleverly designed to cover a very broad range of tones, from clinical, studio-clean sounds, through blues growls and country twangs, to full–on balls–out rock. Drawing on his experience as an amp designer at Marshall, developer Michael Scuffham took great pains to model the ways in which the various stages of an amplifier circuit interact with each other, and when I reviewed the version 2.0 in August 2012 (www.soundonsound.com/sos/aug12/articles/s-gear.htm) I felt it came closer than most amp simulators do to capturing the elusive ‘feel’ of a valve amplifier.

Since that review was published, Michael has continued to work tirelessly on S–Gear, and many of his updates have been free to existing users. Though the latest release still isn’t an ‘integer’ update, the sum of additions in version 2.4 more than merits a second examination in these pages. A full list is available on the Scuffham site under ‘Release History’, and as ever, some are utilitarian while others extend the feature set. Most notable in the former category are support for the AAX 32– and 64–bit plug–in protocols, allowing S–Gear to be used within Pro Tools, and a more flexible preset structure where each preset can store two amp setups.

The Ways Of Love

These practical improvements are very worthwhile, but of course it’s the new features that will turn heads. Chief among these are not one but two new amp models. Introduced in version 2.2, the Wayfarer follows the lead of the existing Stealer, Duke and Jackal in emulating a fairly broad family of related amplifier designs within a single model. In this case, the jumping–off point is a clean sound which, depending on the setting of a Bright switch, recalls ‘blackface’ Fender Deluxe or Twin circuits, and benefits from a convincingly sweet tremolo. There’s enough gain on tap to produce grit when you dig in, but if you want to up the ante, you can switch in one of two lead channels. The first of these gives you the kind of ‘hot–rodded’ Fender sound developed by the likes of Mesa Engineering, with a typically smooth, mid–focused lead sound, while the latter adds still more gain, for a sound that Scuffham describe as ‘modern’ and I describe as ‘not my cup of tea, but very effective’. 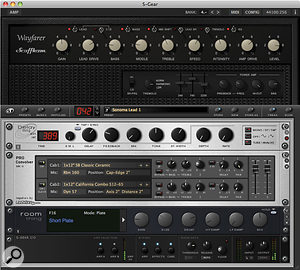 The three existing S–Gear amp models were all highly versatile, but Wayfarer takes this to another level. At the flick of a switch or two, it can go from vintage, chimey Fender cleans to thoroughly heavy palm–muted mayhem, with much else to admire along the way. As with the other models, a hidden ‘expert’ panel extends the control set still further, adding the aforementioned Bright switch plus a switchable three–band graphic EQ and a three–position switch adjusting the shape of the tremolo. What’s perhaps most impressive is the way in which it’s usable throughout the entire range of almost every control. Even the most bizarre EQ settings rarely sound noticeably ‘wrong’, and the Wayfarer seems to mate well with almost all the different speaker impulse responses provided. Not only a jack of all trades, it’s the master of many.

The other new amp is also Fender–inspired, but embodies a rather different approach, based around the simpler ‘tweed’ circuits of that company’s ’50s designs. Custom ’57 thus presents only a gain (Volume) control plus Bright and Bass tone dials, but again, it’s more flexible than you might expect. This is partly because the Bright control is not a straightforward treble cut/boost, but shapes the ‘contour’ of the sound; in practical terms, what this means is that rather than the sound becoming too dark at one end of the scale and too piercing at the other, its character changes but it remains very usable throughout.

That gain control, meanwhile, encompasses the full range of ‘tweed’ possibilities. In the first third of its travel, the clean sound is warm, punchy and direct, exactly as it should be. Turn it up to 12, and I’ve never before heard an amp simulator that captures so well the wild, hairy, out–of–control output of a Fender Deluxe pushed to destruction. Perfect if you’re in a Neil Young tribute band and tire of having someone constantly on hand with a fire extinguisher.

When I first reviewed S–Gear, one obvious omission was that none of the amp models featured reverb. Soon after that review was published, however, Michael added the comprehensive Room Thing module, a virtual rackmount unit that complements the existing Delay Thing and Mod Thing. Room Thing is much more than a simple spring reverb emulation: it is, in effect, a fully featured reverb plug–in, offering plate, hall, stadium, booth and ‘delays’ algorithms too. User control includes pre–delay, high- and low–frequency damping, room size and wet/dry mix, plus hidden parameters controlling the speed and depth of modulation.

Custom ’57 has the fewest controls of any of the S–Gear amp models, yet is still capable of producing a good range of sounds.Considered purely as a substitute for the spring reverbs built into guitar amps, Room Thing is perhaps a little too clean to be wholly convincing, especially at longer decay times, but sounds very nice, and I had a lot of vintage–themed fun using the pre–delay control to turn a short spring reverb into a slap echo. The other algorithms are also highly usable, whether you want some realistic room sound around your virtual amp, or the spacey sound of a plate with the modulation cranked right up. I did run into one glitch where the ‘wet’ part of the reverb seemed to mute itself for no reason, but in general, this is a very well thought–out and worthwhile addition to S–Gear.

All in all, then, S–Gear is a product that goes from strength to strength. Despite the many improvements that have been added since its launch, the asking price remains unchanged (except for exchange rate fluctuations!), and its affordability makes it easy to forgive the continuing absence of a guitar tuner, which I think would now be my number-one feature request. In fact, S–Gear is so good, and such good value, that it’s well worth checking out even if you already have amp simulator software installed. It’s been a pleasure to review and a pleasure to use — what more can I say?

Scuffham Amps’ S–Gear is a deluxe amp simulator at a Tesco Value price, and recent improvements have made it even more tempting.