SE Electronics’ Reflexion Filters are well established items of studio kit, but the company continue to refine the concept and now offer several variations, the latest model being the GuitaRF. As the name suggests, this model is designed to help clean up the sound of miked guitar and bass cabinets. Smaller than the vocal version, the GuitaRF comes with solidly built floor-mounting hardware and has a novel second mic holder built into it. The idea is that it’s possible to position a small-diaphragm capacitor or a moving-coil dynamic mic poking through the screen, alongside a side-address capacitor or ribbon model mounted in front of the screen. There’s enough front/back adjustment that the two mics can be phase-aligned. Apparently, the idea came from a modified Instrument Reflexion Filter 2 used by Paramore’s front-of-house engineer Eddie Mapp, who used it to reduce bleed from other instruments. 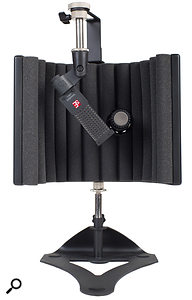 The mounting point that’s suspended from the top of the screen is designed to accommodate the side-address mic and is adjustable for height and depth, but it can also be moved sideways to a degree by rotating it. For securing the end-fire mic, the hole in the screen, which is a little way off centre, is lined with flexible rubbery fins that grip the mic body once you poke it through. A slotted plastic moulding forms the chassis for the screen, which is lined with acoustic-grade wool and separated from the inner shaped-acoustic-foam surface by an air gap. The screen itself locates on a short post that fixes into the base. There’s a little vertical adjustment for the whole assembly, but where this isn’t enough the filter can be mounted on a conventional mic stand easily enough, rather than on its own base. Once assembled, the screen sits on a triangular steel-plate base that is supported on three rubber feet to avoid slipping.

While the screen isn’t large enough to have much effect at low frequencies, it will help attenuate mid and high frequencies and, in the studio, reduce the contribution of the room acoustics. In the case of guitar amplifiers, the benefits of this device are most evident when the mics are placed further from the speaker, particularly when using cardioid mics. When miking very close to the speaker grille with a cardioid pattern mic, spill is unlikely to be much of a problem as the level of sound that close to a guitar amp tends to overwhelm sound from the rest of the back line.

Another scenario in which the GuitaRF is useful is when using ribbon mics, most of which have a figure-of-eight polar pattern and so are just as sensitive at the rear as they are at the front. Some useful reduction in spill can still be expected regardless of the mic pattern, though.

In the smaller studio, where the room characteristics may not be optimal for miking a guitar cab at a distance, the GuitaRF allows you to place the mic further from the cab while helpfully reducing ‘roominess’. It can also be helpful in reducing spill (other than at low frequencies) when using a small amp at a low volume. Maybe this is not essential but it’s certainly useful — and it looks nicer than a pile of duvets!