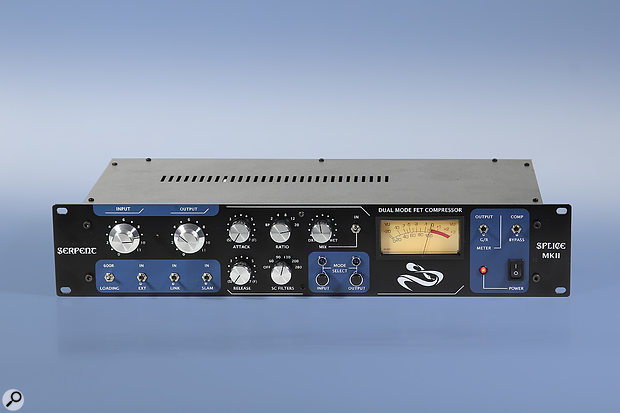 With options including mix-and-match ‘blue stripe’ and ‘blackface’ modes, this is far more than a simple clone of the classic UREI 1176.

Mike Pildis’ US-based Serpent Audio are one of a raft of companies to have sprung up in recent years who make reacreations of classic analogue gear, adding useful functionality along the way. Their uprated take on the SSL G-Series bus compressor seriously impressed Matt Houghton in SOS March 2013. Serpent’s latest offering, the Splice MkII dual-mode FET compressor, is their evocation — again with significant operational upgrades — of the classic Universal Audio/UREI 1176. Unusually, it draws on both the ‘blue stripe’ and ‘blackface’ versions of the 1176, and the different input and output stages of each can be ‘spliced’ together, giving this product its name. Incidentally, whereas this is a 2U 19-inch rackmounting device, the now-discontinued MkI version packed the majority of the same elements found in the Splice II into a single-width 500-series module.

The 1176 Limiting Amplifier was designed by the late MT ‘Bill’ Putnam Snr and was a solid-state redesign of his successful 175/176 vari-mu valve compressors. The newer design utilised the then newly developed Field Effect Transistor — this was the first transistor to emulate the way that valves worked internally — in both the preamplifier and the gain-reduction circuitry. Although we talk about ‘the’ 1176, the compressor design has undergone several changes over the years, each time resulting in a new ‘Revision’, or ‘Rev’. The original 1176 appears to have been developed during 1966, with the first commercially available units (the 1176 Rev A, featuring a silver-coloured, brushed-aluminium faceplate and a distinctive vertical blue-stripe surround to its VU meter) appearing in mid 1967. This was followed a few months later by the Rev AB model, which delivered more stable gain reduction and exhibited slightly less noise. Rev B, in which the post-compressor line amplifier FET was replaced with a bipolar transistor, came next, and the 1176 LN (aka Rev C) followed in 1970. The Rev C not only added a Brad Plunkett-designed, epoxy-encased ‘low-noise’ (hence the ‘LN’) circuit to the Rev B PCB, but also heralded the arrival of the black-anodised faceplate. The Rev D, considered by many cognoscenti (along with the virtually identical Rev E) to be the best-sounding of all 1176 variants, arrived next. In this revision the epoxy module was discarded and the LN circuitry was integrated into the main PCB. On the cosmetic front, the UREI logo appeared on the front panel alongside the original Universal Audio legend, the reason being that UREI (United Recording Electronics Industries) were the manufacturing arm of Putnam’s Universal Audio design company, and took their name from his Hollywood recording studio company, the United Recording Corporation. Later changes to the output and input stages (Rev F and Rev G respectively) made these, and all following revisions, less desirable to connoisseurs of the original 1176 sound.

Visually, with its black faceplate sporting a large rectangular VU meter, blue panels and chromed controls, the Splice II echoes the cosmetics of its two inspirational antecedents. However, compared with the original 1176, the Splice II positively bristles with knobs and switches. As you’d expect, the original complement of Input, Output, Attack and Release controls are all present, with the latter two retaining the 1176’s reversed operation paradigm in which attack and release times shorten as their respective knobs are turned clockwise.

From here on in, matters are taken in hand by Serpent Audio’s range of deft enhancements. The four buttons that set the compression ratio on the 1176 are gone, to be replaced by a six-position rotary switch that selects between compression ratios of 2, 4, 8, 12 and 20:1, and a soft bypass. This last setting disables the compressor but keeps all the Splice II’s circuitry in the signal path.

The 2:1 compression ratio was not a feature of any 1176 other than the (much later) 1176AE Anniversary Edition, and neither was the Splice II’s high-pass side-chain filter (switchable between 60, 90, 130, 200 and 280 Hz), which can help ensure that low frequencies do not trigger unwanted compression. Nor was the switchable Dry/Wet mix control, which simplifies setting up parallel compression. A group of toggle switches activates various useful features: the 600Ω output loading, to ensure compatibility with modern equipment; the external side-chain I/O loop; the Link facility that connects two Splice IIs together for stereo operation; and the Slam setting, which duplicates the 1176’s ‘all buttons in’ mode — of which more later. 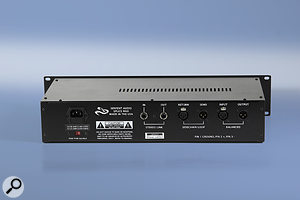 The rear panel plays host to several inputs and outputs, including the side-chain effects loop.

A pair of button switches, accompanied by blue status LEDs, engage the ‘blue stripe’ and ‘blackface’ input and output modes, allowing you to mix or match them as you desire. The LEDs default to dark (blackface) at power-on and illuminate when blue-stripe mode is selected. One of the final two switches toggles the VU meter between gain reduction and output level, and the other enacts a hard bypass.

Open the lid of the Splice II and you’ll find a cleanly laid-out, neatly wired interior that inspires confidence. Circuit-wise, ignoring its additional functionality for a moment, the Splice II sets out to recreate the ‘blue stripe’ (Rev AB) and ‘blackface’ (Rev D) 1176 as closely as possible. A signal entering the unit first passes through the three-gang, balanced, 600Ω constant-impedance input attenuator that featured on all Revisions from A through to F. From there, the signal passes, via a custom-wound recreation of the original UTC O-12 input transformer and the blue-stripe or blackface input circuitry, to the gain-reduction element (which uses a single FET as a variable resistor), and then to the signal preamp.

Next comes the Cinemag balanced output transformer, which replicates the 1176’s UA-5002, with its additional windings for feedback and DC offset compensation. The dry/wet mix circuit, when activated, is inserted after the output transformer and results in an electronically balanced output. When bypassed, this circuit is completely removed from the signal path, returning the output to true transformer-balanced status.

It is also worth mentioning that the Splice II’s VU meter is buffered, removing the cause of the distortion created in the output when the unbuffered VU of a 1176 was used to monitor output levels — a very welcome upgrade.

Although Serpent Audio take great pride in matching components in normal production to ensure consistent unit-to-unit performance, they also offer ‘super-match’ units, which may be ordered as a stereo pair. Stereo-linking a pair of original 1176s required the use of the 1176 SA Stereo Inerconnect Accessory, and necessitated manual matching of the bias voltages from each unit. Thankfully, matters are much simpler here, in that when a pair are linked (Link In to Out and Out to In), each unit sums its own internal side-chain control voltage with the incoming control voltage, and averages the result. What this means in more practical terms is that, when the controls on both units are set identically, the compression tracks accurately across the stereo panorama.

The Link function has a further trick up its sleeve, in that it will raise the compressor threshold by 6dB if it is engaged during mono operation, which means that you can drive the input transformer to higher saturation levels before triggering compression. This can be an extremely useful sonic enhancement to, for example, a rock vocal.

So far, I’ve referenced the original 1176 products liberally, for obvious reasons, but you really should consider the Splice II on its own merits — so let me do that here. Inserting it in soft-bypass into the signal path instantly imparts a subtle sense of transformer ‘warmth’ to the sound, an impression that is reinforced as input attenuation is reduced to increase the drive into the input transformer and output gain is increased to push the output transformer harder. If you’re so inclined, you can elicit some tasty distortion from the Spice II — especially via the harmonically richer blue-stripe mode — to mix in with the dry signal. Those who prefer a pristine, uncoloured sound may want to look elsewhere!

Although the unit has noticeably more self-noise in blue-stripe input mode than in the blackface equivalent, this noise isn’t overly obtrusive unless used on quiet sources, in which case I definitely preferred the blackface setting. Conversely, I felt that the blackface mode’s output, since it seemed to deliver slightly more level, was the noisier and so my default mode setting for subtle ‘transformer enhancement’ paired the blackface input stage with the blue-stripe output. 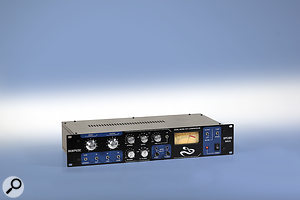 As a compressor, the Splice II performed superbly across a wide range of sources, imparting a sense of warm, well-controlled depth and definition in an almost transparent fashion at its lower ratios of 2:1 and 4:1, and becoming more ‘in your face’ as compression increased. Although there’s no dedicated threshold control, the threshold increases with the compression ratio so, whatever the source, getting the sound that you want is a simple matter of juggling ratio, input attenuation, attack and release until you’re happy. The addition of both the side-chain insert loop and the five-frequency side-chain high-pass filter is a huge plus, and the mix control makes setting up and experimenting with parallel compression a breeze.

As I alluded to earlier, the original 1176 is famed for the sound of its ‘all buttons in’ mode, pioneered by the apocryphal unknown British engineer who pushed all four ratio buttons in at once. The Splice II allows you to replicate this hard-to-describe but mighty-sounding mode — characterised (to my ears) by increased distortion and a lag in the transient attack that makes things really punchy — by selecting either the 4:1 or 20:1 ratios and engaging the Slam switch. You can turn on Slam in any of the other ratios, too, and each gives its own sound, although the differences are pretty subtle.

When compressing that bit harder in blue-stripe mode, with its greater level of harmonic distortion (and noise), the Splice II seemed to me to give more energy and bite to the sound, while the quieter blackface setting had a more refined (though no less distinctive) delivery.

To me, the Serpent Audio Splice II is not simply another mid-priced 1176 clone. I view it rather as a subtly innovative update of Bill Putnam Snr’s original concept. In short, it’s a very fine compressor that delivers a high level of performance across a wide range of sources, in the style of the two different-sounding UA/UREI 1176 Limiting Amplifier revisions on which its core circuitry is based. Its innovative ‘splice’ switching between the blue-stripe and blackface input and output modes is joined by a host of other features (the addition of a useful 2:1 compression ratio, the side-chain high-pass filter and insert loop, the dry/wet mix control, simple but effective stereo linking, and VU meter buffering) to make the Splice II a wonderful fit for present-day recording requirements.

What’s more, this is all delivered for a price that, whilst not exactly cheap, represents real value for money, given the features, facilities and level of performance on offer. If you have the need for a high-performance FET compressor and have this sort of budget available, the Serpent Audio Splice II should be high up on your audition list.

There are now plenty of 1176-inspired compressors around, not least Universal Audio’s own latest model. Yet few offer as many enhanced features or sonic options as the Splice MkII. The closest equivalent I can think of is the Slate Pro Audio Dragon, which possesses similar features and facilities but which delivers them in a slightly funkier way. If the budget is tighter and you’re happy with fewer tonal options, you might check out the Wes Audio Beta 76 or the Warm Audio WA-76. For other takes-with-a-twist on the 1176 concept, check out IGS Audio’s Volfram Limiter, the Looptrotter Monster (both of which are stereo devices), and the Lindell Audio 17X and 17XS MkII.

A high-performance compressor with innovative and practical features, the Serpent Audio Splice II delivers a mix-and-match approach to the classic ‘blue-stripe’ and ‘blackface’ 1176 sounds, and updates their design to present-day requirements at an attractive price.