Shadow Hills pack a lot of punch into a tiny space, as they combine a hi‑tech interior with classic styling in this new API Lunchbox‑compatible compressor. 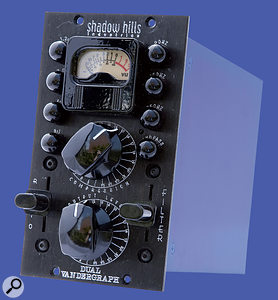 American manufacturers Shadow Hills Industries have a number of dynamics processors in their product array. The Dual Vandergraph has been developed from the VCA compressor‑limiter section of the company's enormous flagship Mastering Compressor, but is designed to fit within the very restrictive constrains of the increasingly popular API Series 500 'Lunchbox' format.

The Dual Vandergraph apparently combines the discrete Class‑A 'gain cell' topology of the Mastering Compressor with configurable side‑chain filter circuitry derived from their Octagraph model. The company's marketing angle is formed around a military wartime theme, with lots of references to Enigma machines — and the manual even contains a section on how to destroy the unit to evade enemy capture! The web site is a work of art, but is also enormously frustrating to navigate, so make sure your humour and patience batteries are fully charged before trying to find out more...

The device occupies two slots of an API 500‑series 'Lunchbox' frame. It provides two channels of audio I/O, and is designed as a stereo processor, but could also be used to process a single channel. The module is remarkably heavy, given its size, due largely to the presence of Jensen input transformers and a couple of very chunky iron‑cored output transformers, all of which are supported in a substantial steel chassis. The electronics are contained mostly on a single board, with surface-mount components on one side and more conventionally sized transistors on the reverse, along with a pair of discrete 'op‑amp' modules. Two daughterboards support some additional components associated with the front-panel controls and the second channel input/output connections.

Despite the high‑tech internals, the front panel is fabulously vintage, with a miniature kidney‑shaped VU meter, bulbous lamp bezels, and large, ancient‑looking Bakelite rotary and lever switches. The operational controls are minimal but effective, starting with a five‑position lever-switch to select the compression ratio (off, 1.2:1, 2.5:1, 4:1, and 8:1), the current mode being indicated by one of four illuminated lamps running up the left-hand side of the VU meter. The off position (all lamps extinguished) activates a hard‑wired bypass, and each of the four ratio presets engages its own predetermined attack and release time constants, which the manual states are 30/100ms, 30/500ms, 10/500ms and 0.5/250ms, attack/release, respectively. So, for example, the 8:1 ratio is a pretty effective peak limiter, catching fast initial transients and releasing the gain reduction fairly swiftly, while the 2.5:1 option has a gentle attack to allow the initial transient through undiminished, and a gentle release time for a smooth, controlled effect.

The final control is another five‑way lever switch, which engages one of four filters within the side‑chain. The first four options select Off, 90, 150, or 250Hz high‑pass filters, each progressively reducing the influence of low frequencies in controlling the amount of compression. The last option introduces a band‑pass filter (the turnover frequencies aren't given) to remove the influence of high levels of both LF and HF signals in the mix, focusing the compression firmly on the mid-range content.

The Dual Vandergraph is very easy to use, and the fixed attack and release settings are well chosen to suit the applications each ratio is most likely to be used for. I used it mostly as a main mix‑bus and drum group compressor, although I also employed it as a single-channel device to process vocals and bass guitar.

Hooking this compressor up is very straightforward, via the XLR inputs and outputs on the back of the Lunchbox unit. There's no provision for side‑chain access, and I noticed that the Dual Vandergraph is a little fussy about the load it is asked to drive. Low‑impedance loads result in a significant loss of bottom end, and although the published specs state the minimum load is 600Ω I found the lack of LF was quite audible when connected to a 600Ω load. However, I doubt this will be a problem in practice, because most console insert‑points and DAW interfaces will present an input impedance of 10KΩ or more. Certainly, when I hooked the Dual Vandergraph up to my normal DAW audio interfaces I experienced no problems at all.

The Dual Vandergraph has that lovely 'larger than life' character that is often associated with transformers and high quality Class‑A circuitry, giving a full‑bodied, slightly thickened quality. The 1.2:1 ratio is pretty subtle and does a great job of taming the dynamics of acoustic guitars without becoming heavy‑handed, while the 2.5:1 ratio delivered really great results as a mix‑bus compressor. The lack of adjustable attack and release time constants didn't trouble me at all — the preset settings just worked superbly well with everything. I also discovered that you can really drive hard into the compressor without the sound getting nasty or thinning out. That is often a weakness in VCA‑based compressors, but not here. Even the 8:1 pseudo‑limiting setting retains detail and clarity from the source, but with firm control on the dynamics.

It seems wasteful to use the Dual Vandergraph to handle a single-channel source and, good as it is, there are many other single-channel compressors that I'd generally prefer for vocals and instrumental sources. But for mix‑bus compression and drum‑kit compression, the Dual Vandergraph delivers some really lovely results. It's nothing like as sterile as many VCA designs: it adds character and body to the mix, and retains a solid bottom end that eludes some of the well‑known alternatives. The minimalist controls make finding a suitable setting very fast and easy: pick a ratio, dial in the required amount of compression, restore the output level, and then experiment with the side‑chain filters to determine how much gain pumping you want the bass to instil. It really is that simple — and then you just get on and mix.

If you already use the 500‑series format, the Dual Vandergraph is a great stereo bus‑compressor to install — and if you don't, then this model provides a lot of encouragement to go down that route! It may be a bit pricey as stereo compressors go, but in my opinion the quality it delivers justifies the price.

There are a lot of alternative bus compressors at around this price, though there are fewer in the 500‑series format. The best-known competitor is probably the Dramastic Audio Obsidian 500, but that's substantially more expensive. Although the SSL X‑Rack Stereo Bus Compressor in a Mynx frame is not 500‑series compatible, it is a comparable solution, and comes in at a lower cost than the Vandergraph, while their stand-alone X‑logic G‑series Compressor is a little more expensive. If 500‑series compatibility isn't important, then a world of superb compressors opens out, with options including the Buzz Audio SOC1.1, DAV BG4, DBX 162SL, Drawmer 1960, Rupert Neve Portico 5043, Safe Sound Audio Dynamics Toolbox, and Smart Research C1. All are around the same price point, and all have distinctive features.

This 500‑series stereo VCA compressor combines distinctive retro styling with easy‑to-use configuration, and is capable of the sort of results you'd expect at this price!

Marvel's Guardians Of The Galaxy
2 months 12 hours ago.