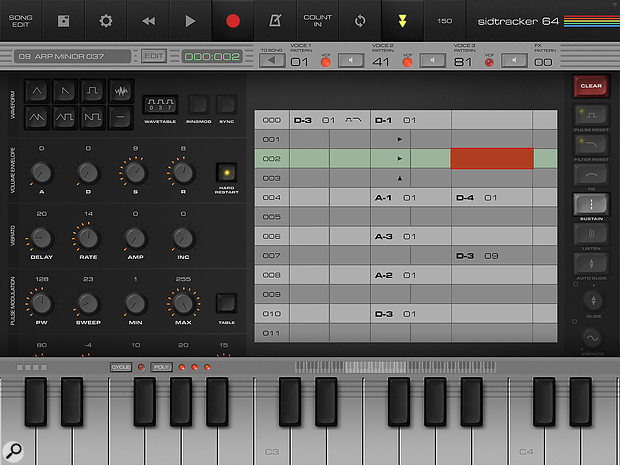 SidTracker’s three voices, along with any effect automation, are programmed into a vertical–scrolling tracker sequencer.

Before we kick off, I have a confession to make: I wasn’t previously aware that chiptune music was a thing. I was, however, aware of the SID soundchip — the bleepy, cheesy source of the Commodore 64’s musical output — but mainly because of Elektron’s SidStation. SidTracker 64 is a 21st-century emulation of that chip, accurate down to its three notes of polyphony and ability to export your songs for playback on an actual C64. To make it more interesting you’re also supplied with a comprehensive vertically scrolling tracker sequencer, MIDI input and assignable controls.

The three–voice synthesizer has a selection of waveforms, a single multi–mode filter and the rather neat switching of sounds for every step of each pattern, if you wish. Even so, it’s firmly restricted to the 8–bit sound palette from the ’80s. Happily, that doesn’t rule out it being a lot of fun and a source of some complexity, thanks to the ring modulator, hard sync and a very trashy noise source.

To really mess things up it features the dirtiest form of pulse-width modulation I’ve ever encountered, plus a breed of wavetable synthesis that’s glitchy and ugly to the nth degree. It’s your choice whether to opt for total accuracy and live with the random envelope triggering errors of the original SID chip, or activate the ‘hard restart’ option for more predictability. 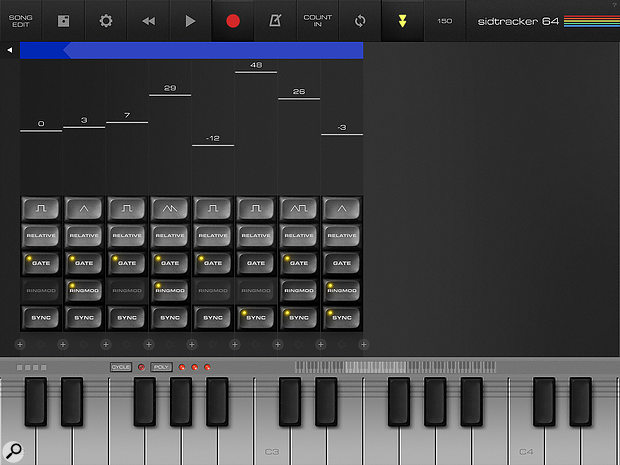 It’s not wavetable editing in the PPG or Waldorf sense, but if you like manic, glitched timbres, SidTracker is surprisingly capable.

The multi–mode filter has 12dB low– and high–pass modes, plus 6dB band–pass, all of which can be combined. Although the resonance is nothing to get excited about, you can create some fairly interesting filter effects over time by sweeping the cutoff, using the ‘Table’ option or by programming effects into the tracker’s dedicated effects track. Table is a simple modulation sequencer and the same principle is used for pulse-width tweaking and wavetable editing. As it’s controllable down to 1/240th of a second, you can micro–sculpt in ways rarely seen on any synth or sequencer.

SidTracker’s strength comes from its ease of use and simplicity of operation. Select a sound from the list of 32 presets, modify and rename it if necessary, then go.

SidTracker’s strength comes from its ease of use and simplicity of operation. Select a sound from the list of 32 presets, modify and rename it if necessary, then go. I wasn’t very keen on the method implemented for operating the (smallish) knobs — you touch their centre then make a circular orbit; the wider the orbit the finer the control — but you get used to it. 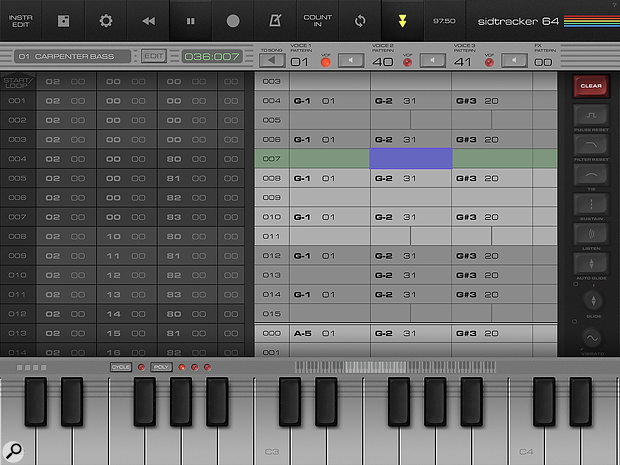 Patterns of up to 128 steps each can be arranged into songs.

Each of the three note tracks has a pattern that shares a common length of between eight and 128 steps. The effects row allows you to set the volume, filter and base tempo and those dedicated to extracting the most from the limited sound engine will be pleased to know you can place tonal changes on every step of your patterns. You record either by playing the notes on the on–screen keyboard or from MIDI input, building up songs dynamically as you go. A number of ‘note effects’ determined whether notes are tied, sustained over multiple steps, or the filter is reset, vibrato added, etc. There are even a set of mini drum pads with four sounds that you can add too — still subject to the three–voice limit.

The songs you make can be surprisingly varied and interactive (within the limitations mentioned) and can be exported in a variety of formats, although the only audio format is the lossy but strangely appropriate MPEG–4 (AAC). Audiobus 2 and in–app audio is supported and SidTracker 64 is also easily integrated with Dropbox. In other words, those chirps, bips and warbles can find their way into your regular tunes if you desire. It won’t change your life but SidTracker 64 could be more fun than you expect. Although I have never been asked to emulate the sound of a C64, I’m now fully prepared for the eventuality.